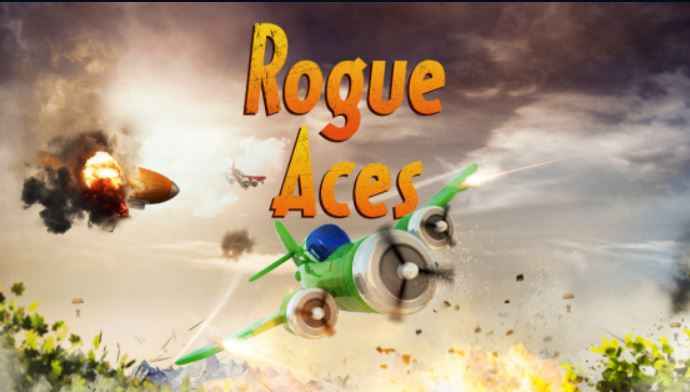 On first glance Rogue Aces evokes comparison with Vlambeer’s fantastic Luftrausers, a wacky 1940s 2D arcade shoot em’ up that placed a premium on frenetic, white-knuckle action. Once you sit down and play Rogue Aces however, you soon realise that, setting aside, the two offerings couldn’t be any more different and though Rogue Aces isn’t quite as satisfying as its immediate peerage, it offers a neat take on the shooter formula that warrants attention all the same.

In the beginning, and aside from a handy tutorial which provides ample guidance on the basics, Rogue Aces allows players access to a single game mode, the conservatively titled ‘normal campaign’ which encapsulates the essence of the Rogue Aces experience. Here, your trusty propeller aircraft begins on an aircraft carrier and your commander provides you with your first mission, which though random, invariably requires you to blow something up, whether you find your quarry on the land, in the air, or on the water.

With cannons, rockets and bombs at your disposal you find yourself soar through the sky, laying waste to your enemies as you complete one mission after another. The way Rogue Aces deals with its missions and the environments that you’ll be completing them in however is in a procedurally generated fashion, with both being different each time you play. Somewhat brilliantly, you’ll very often come across other mission objectives whilst completing the mission you’re on – for example, you could be tasked with destroying some tanks but you might also lay waste to a munitions factory too,and if you destroy those targets before they are given to you next, you not only get bonus experience points (with extra given during the game for whatever enemies you blow up) but you also save a whole heap of time into the bargain.

Speaking of experience points, Rogue Aces leverages them to provide the backbone to its roguelike design because whenever you earn enough experience points to level up, each new level allows you to choose a number of random additional power-ups to begin each game with, such as better handling, more bombs and more powerful cannons to name just a few. As a result, Rogue Aces neatly ticks that roguelike box of making you feel a little bit more capable each and every time you return to it which is, y’know, a good thing.

Additionally these experience points can also be spent within the game itself too, because while you are able to land at your starting aircraft carrier for free to recharge your ammo and fuel (thank Cthulhu you don’t have to stick the landing yourself – merely be in the vicinity of it and hit the ‘x’ button for it to happen automatically), any bases that you take over by destroying their defenses will charge you to land there. As such, because eastward expansion is pretty much the main goal in Rogue Aces normal campaign, you need to be frugal about ensuring you have enough points to land at a local base the further the conflict spreads from your starting carrier.

Where Rogue Aces arguably surprises the most however is in its handling and flight model. Much different from the freewheeling smoothness of Luftrasers 360 degree movement scheme, Rogue Aces instead implements a much more sophisticated method of control where your plane simply cannot turn on a dime, and instead you must use momentum and physics to direct your plane where you want to go. Once you’ve spent a great deal of time flying about in Rogue Aces, it’s not long before you find yourself pulling off impressive looking aerial maneuvers, bombing runs and more besides with ease.

Until you reach that blissful point where you’re properly acclimated with the idiosyncrasies of Rogue Aces control scheme however you need to prepare for yourself failure, lots of frustrating, pad-squeezing failure. Indeed, in the early going, you can expect to dive into the ground when you try to turn around and lose control of the direction your plane when in the middle of a dogfight very frequently and often. The reason for the relatively steep incline of Rogue Aces handling model is that the controls which the game uses are based on an MIT flight model, whereupon the player controls the propulsion system of the craft rather than the entirety of the craft itself as other games would usually do.

By striving for something a little more grounded than the arcade style handling one might otherwise assume would be at the core of Rogue Aces, the game ensures that it isn’t really suited for just any folk to pick up the pad and get cracking – this game wants you to master its handling model and it doesn’t care for your pithy whining and frustrations.

Beyond Rogue Aces somewhat divisive handling model,if you decide to eject from your craft your pilot is far from defenseless as they can toss grenades on their way down to the earth, scoring some precious last second experience points in the process. Better yet, if you eject from your craft and your pilot hits another craft in mid-air, they can effectively hijack that plane and continue the fight in an extremely neat spot (complete with trophy to match).

Encompassing more than just a single game mode, the more you play Rogue Aces, the more modes you unlock. Aside from the normal campaign and usual survival mode variants, Rogue Aces ace in the hole, if you’ll excuse the pun, is the frontlines campaign where you have to take over islands on an overworld map by destroying key elements of enemy forces and infrastructure before moving onto the next, with the idea being that you forge a path through the islands to the enemy base which stands as your ultimate objective. All told, it’s a well constructed mode that makes for a worthwhile diversion from the game’s primary normal campaign. On the topic of value, it also doesn’t hurt that Rogue Aces supports both Cross Play and Cross Buy, allowing you to begin the fight on your PS4 and continue it on your PS Vita, and of course vice-versa.

With 2D retro visuals that err more towards functional than attractive, a rocking metal soundtrack and surprisingly deep roguelike shooter elements wrapped around an idiosyncratic handling model, it’s reasonable to posit that Rogue Aces is quite the odd duck indeed. Nonetheless, if you can tolerate and get used to its handling model, then Rogue Aces offers up a sky-bound slice of delectable shooter shenanigans that PS4 and PS Vita owners alike should enjoy.

If you enjoyed this Rogue Aces review, why not unearth some other independently developed gems in our best PS4 indie games feature.

A challenging but ultimately compelling airborne shooter, Rogue Aces soars where it counts.