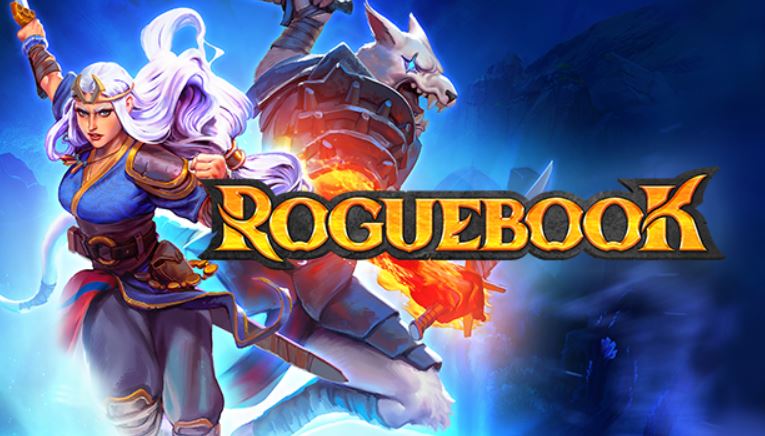 Roguebook PS5 Review – Regular readers will know I’m a sucker for board games, not to mention deck builders and roguelikes. So, you can imagine my reaction when I clapped eyes on the trailer for Roguebook. Coming from the tried and tested mind of Richard Garfield, creator of Magic the Gathering and Abrakam Entertainment SA, comes a radiant ink-based, card-battling adventure.

In Roguebook you are trapped in the Book of Lore of Faeria, using ink and other consumables you reveal a procedurally generated hex-based map, fight off hulking foes and build your arsenal of cards, allies and relics. The comparisons to Slay the Spire are obvious and this game does feel a lot like the ever-popular deck builder. Roguebook does, however, have a few ideas of its own.

Firstly, when you are not locked in cardboard combat, the map exploration is quite unique for the genre. Due to the fact you are trapped in this mythical tome, you use ink, which is very limited, to reveal new hexes and all the randomly generation trappings you expect from games of this ilk. Shops, cards, battles, cash and all sorts are there for the taking. That is, providing you have precious ink left in your brush. 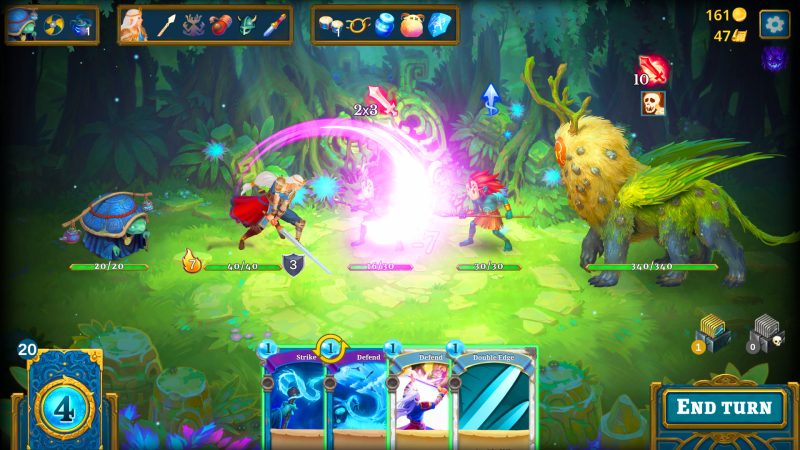 It’s perhaps this system and the fact you control a team of two characters that makes Roguebook stand out against other games of this ilk. Having two team members with character-specific cards and shifting them on the battlefield does create some fun tactical nuances and interactions with the cards, as does it garner your decisions when building your respective decks.

Garfield is well known for his card games. In fact, I recently backed a Kickstarter for Mindbug, another one of his titles, which is again a one on one battle of wits. So, Garfield certainly knows his stuff and that is certainly in full view here. If you have played Slay the Spire or any modern card game of this type you will slip straight into Roguebook’s many terms and card abilities.

What is especially rewarding is that like Spire, you can select anything in the game’s many battles and it will fully describe what it does. There are a lot of terms to get used to but at least the game keeps you posted about what is going on.

In addition, the enemies’ next moves being shown and card values changing on the fly really help to ease new players into the genre and makes decisions about what to play so much easier. 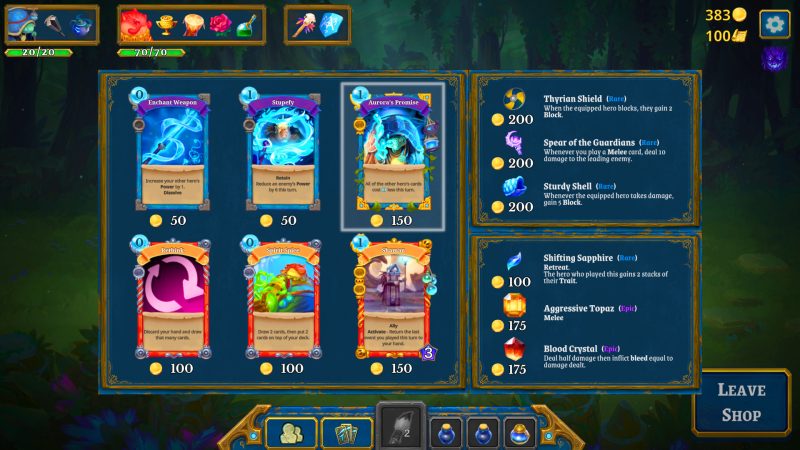 In battles, you have a certain amount of energy – mana, if you will – and you must play cards from your hand. You block enemies’ attacks, negate their powers and whittle down their health. Some cards move your character’s position, some make cards cheaper and it is how you use these cards and especially what order you use them that will decide the outcome of the battle, as will knowing your enemies moves and abilities.

The enemy variety on Roguebook and the different tactics you must use to beat them was particularly entertaining. Some enemies summoned smaller creatures, some required finesse, power or even required a test of patience and blocking skills. Each battle was entertaining, fun and did make you think about what you need to do to win.

There are a few other little tweaks to the system in Roguelike I quite like too. I enjoyed the gem and socketing system you have on your cards. Meaning you can amend, change and craft cards as you play, further tweaking your play style and creating some devastating combos.

I also really liked that the more cards you have in your deck, the more passive bonuses you can select for your team. Encouraging thicker decks rather than the normal ‘lean’ decks these games push you towards. 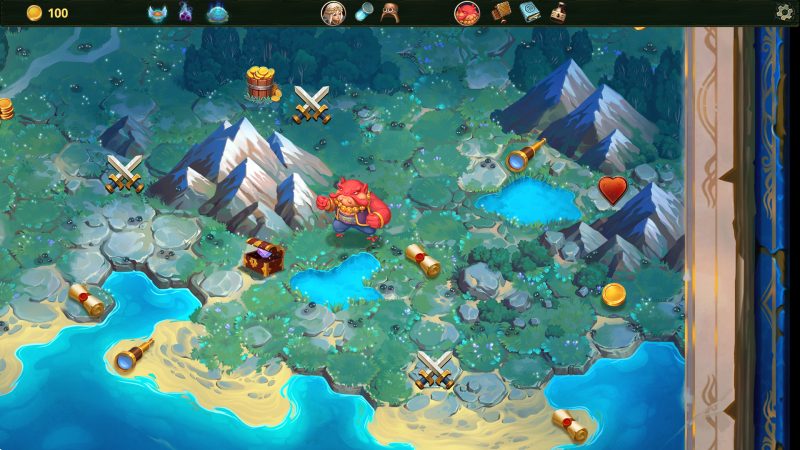 As with Slay the Spire, it’s the randomness, the building of your characters that is really addictive. Every run is different and depending on what you find between fights and what characters you take out with you, your tactics and strategy will change and Roguebook really encourages experimentation, which is never a bad thing.

I absolutely adored the art style, the characters and the design-work in Roguebook. Everything is bright, well-realized and full of character. Every enemy and every character is beautiful to look at and the designs are so unique and varied. This colourful and wondrous world is a joy to gawk at and traverse through, although the sound effects weren’t quite up to the same standards.

There’s also a couple of issues I had with the game overall. While having a bigger deck and two characters were fun and I like buying new ‘shiny’ things, it did leave a bit too much wiggle-room when forming strategies. Cards I wanted to come out together would not do so too often and managing two characters’ decks meant forming a strategy was sometimes challenging.

In addition, I had a few issues with using ink to reveal the map, as it felt off sometimes and now and again did not work correctly. I also encountered a few very minor technical difficulties when picking cards, but these were relatively inconsequential and not at all common. As such, they didn’t affect the gameplay whatsoever and never detracted from the experience. 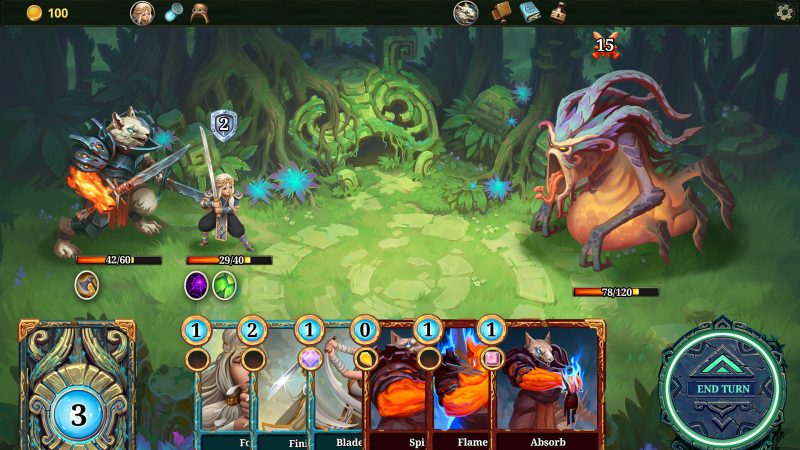 An Enjoyable, Slightly Different Take On The Genre

While Roguebook never quite strides to the heights of Slay the Spire, it does offer a few unique twists on the formula. The multiple characters are fun, as is building a team and handling two decks. Exploration is restrictive enough to garner your attention yet using your hard-earned ink can reward you heavily. It’s beautiful, fun and quite addictive.

Building a bang on strategy can be difficult with two characters, two decks and a lot of cards, but having fun and experimenting trumps that. A few niggles aside, which are never really noticeable, Roguebook should prove an enjoyable romp if you’re a fan of the genre.

While Roguebook may not be my favourite game in this genre, it does offer a lot of variation and a few interesting tweaks to the genre. It's jaw-droppingly beautiful, incredibly creative and the crucial card play is very entertaining. The exploration is a nice addition and creates a risk and reward system to proceedings, as is the card crafting. While you may not be able to create a lean, all-killing deck, what you can create is a heaving bag of frivolity and opportunities.