Sail Forth Review (PS5) – I was both unsure of what to play after getting my God of War: Ragnarok platinum, and how Sail Forth would fare after playing something so brilliant. I need not have worried though, after five minutes of tranquil sailing, I was in! Pull up your anchor and let’s Sail Forth!

Coming from Festive Vector and Quantum Astrophysicists Guild, Sail Forth is a quirky adventure come sailing game with boat-loads of charm. Will you risk it all by taking on the Skull Clan or take the chilled life by fishing and taking scenic photos? There’s loads to do while zipping around on the deep blue.

Sail Forth starts off quite cryptic and only gets slightly more apparent as you progress. There’s some investigating to do, a mad scientist and some simple fetch quests, some monster battles and loads of funny dialogue. What excels in this game though and elevates it quite significantly is its exploration and sea-based gameplay loop. 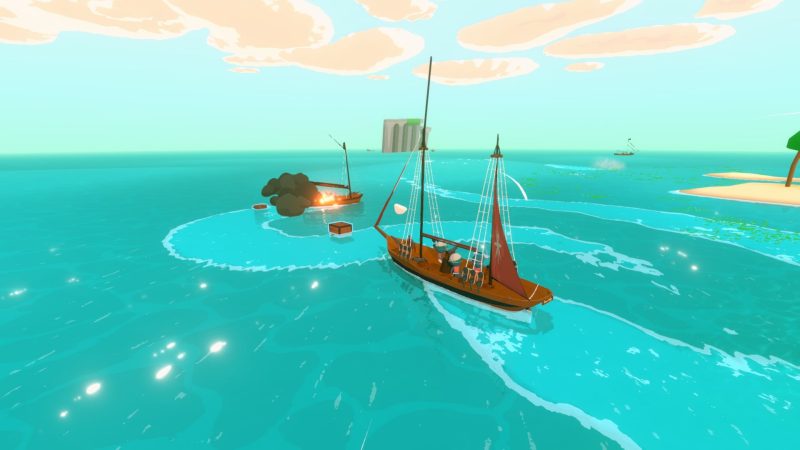 You start the game with a humble crew, a small ship and have lofty dreams of treasure and wealth. Over the course of your adventure, you upgrade and tweak a fleet of massive boats, laden with firepower and command a crew of salty sea dogs.

I love games that have that kind of journey, you start small and weak but finish tall and all-powerful. Super.

On your travels you will run into an all manner of diverse characters, I really found the dialogue and the people you meet quite uplifting, unique and rather refreshing. Some of them spoke in really uncanny ways, using strange words which gave their character depth and I found that really novel.

While you’re jetting around this vibrant world you have many tasks sprinkled amongst your main quest. There are pirates to battle, fish to catch, ancient objects to find, races to win and many, many more things to boot. I thought the variety of things to do and see, for such a small game, was superb. 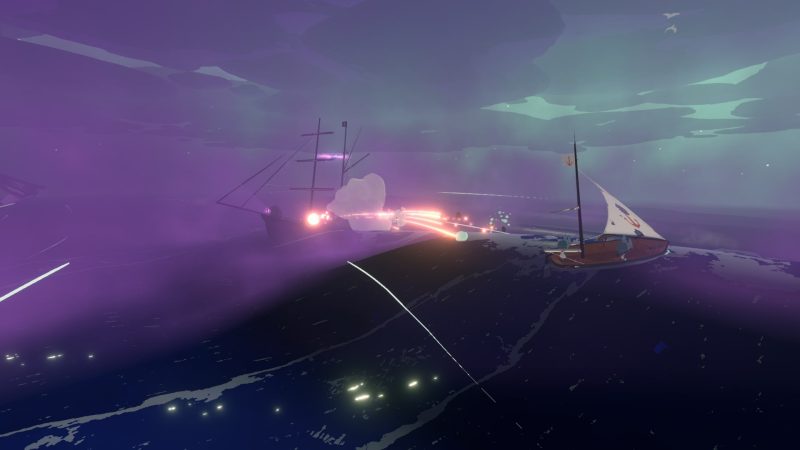 As you are filling your holds with booty, you can visit various ports to upgrade your fleet. These shops are run by an alien in a diving suit who is competing with his family to offer the lowest prices (as I said, great characters). You can build bigger boats, give yourself more guns and even equip various tools to help you on your scurvy jaunts.

Bigger vessels have more upgrade slots, can hold more items, have more guns and all the boats I bought had varying stats. I would use a different boat for sailing than I would for fighting for example. It was rewarding and very enjoyable to gradually upgrade your fleet and watch your vessels get bigger and more functional. 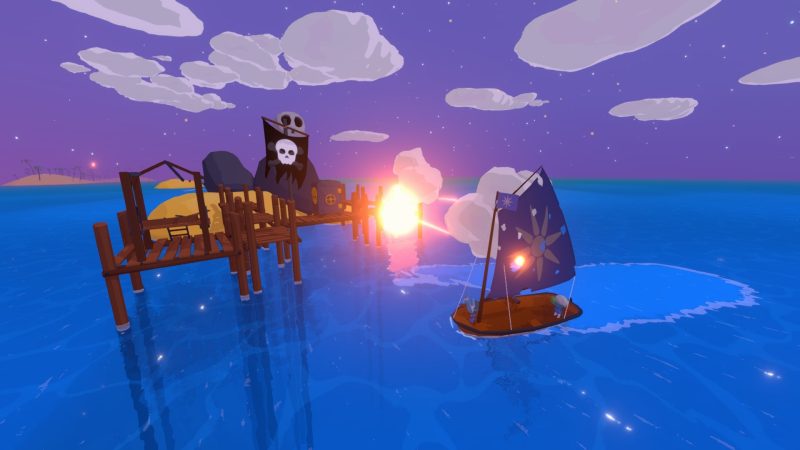 Quite often I would get stuck on small islands under the sea or my sails would get caught on structures and when I had a fleet of ships they would, sometimes, run into me and cause me damage. While this is nowhere near game-breaking, there were a few instances where I had to reset and it was slightly irksome.

Combat reminded me of a trimmed-down version of the Assassins Creed: Black Flag ship combat. Hold a shoulder button shows aiming markers and as long as your cannons are loaded. FIRE! What armaments you have equipped will determine how much damage you do and how far they reach. Battles were always entertaining and constantly amusing.

Your battles would be against the Skull Clan ships, their bases or even weird monsters you encounter. These battles often rewarded you with loot which feeds into your upgrade plans creating a simple yet satisfying gameplay loop that kept me entertained for numerous hours. I was constantly getting sidetracked with little tasks when I should have perhaps thought a bit more about the main quest.

From a visual standpoint, while being very basic to look at, Sail Forth does have a unique and charming look to it. It’s bright, bold and very clean looking. The characters are charming, so full of life and the visual style does a great job of making the world feel alive and vibrant. 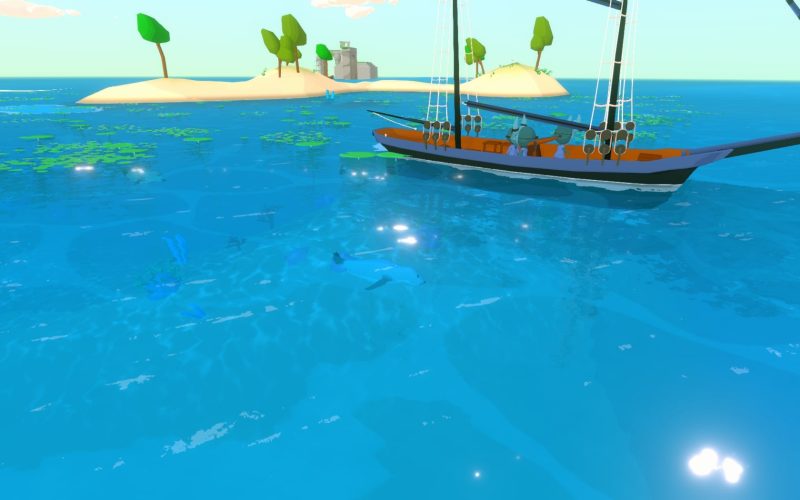 I adored the dialogue and the way each character spoke in, at times, riddles. Sound-wise they spoke in ‘Sim-ish’ nonsense but the on-screen text elevated it massively with its nonsensical wordplay. The music was very chilled and matched the tone of the game nicely, creating soothing feelings while you’re pottering around the seven seas.

All in all, while Sail Forth may not have blown me away with anything in particular, what I did get was a very well-made sailing sandbox. Its attractive world is full of quirky characters and things to do.

Sail Forth has an interesting and satisfying gameplay loop that was just what I needed after such a heavy game. Right, I have a few more things to mop up on the open seas, AARRRRR!

Sail Forth is out now for the PS5 and PS4.

Now and again you will want a game that while not being 'flashy' is warm, unique and entertaining. Sail Forth is all of these and will keep you interested for hours. There's boat-loads to do with its many activities and wacky characters. The navigation is rewarding, the combat never gets old and everything looks so wholesome.