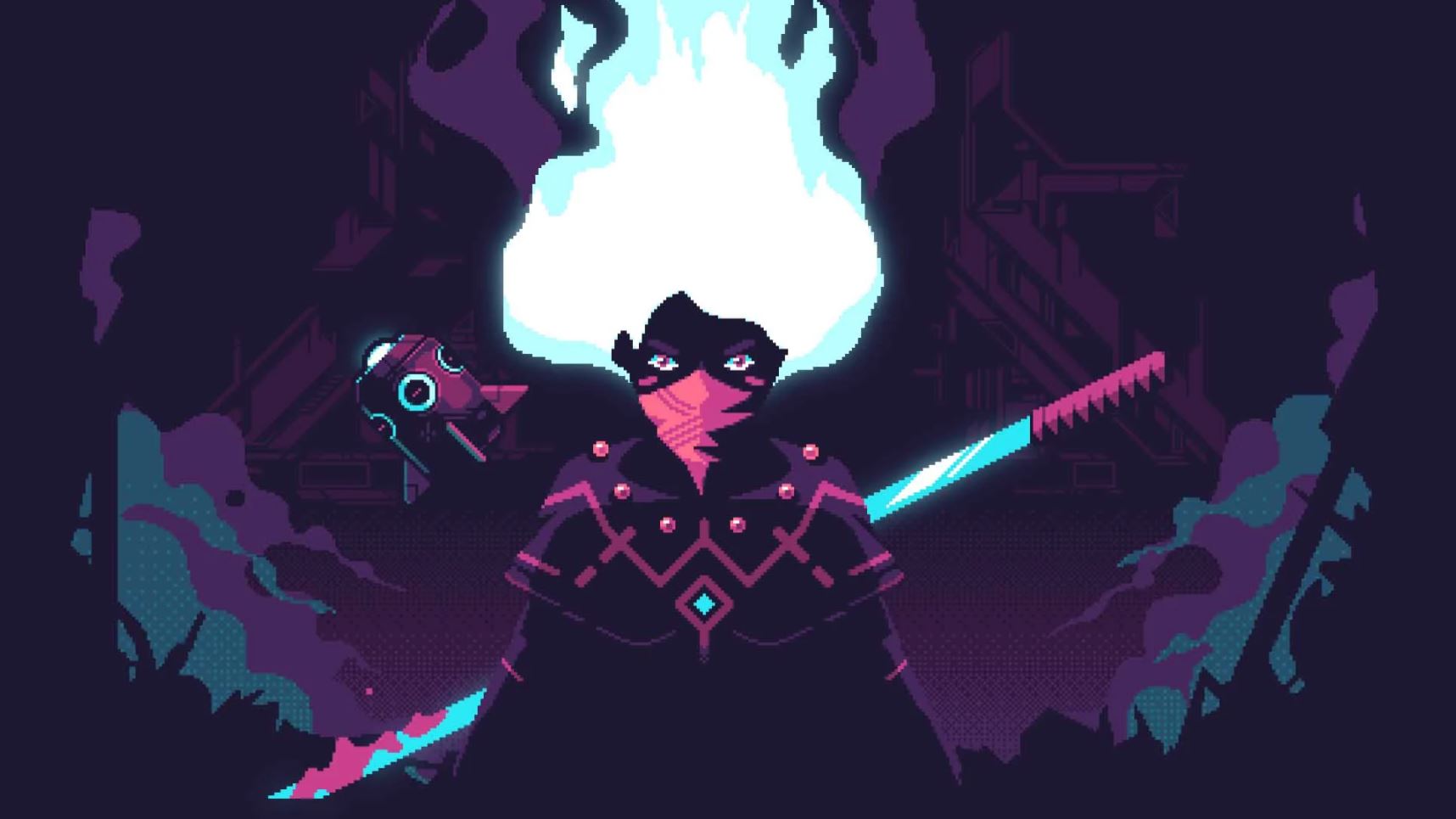 ScourgeBringer PS4 Review – Roguelikes were a once dormant, rarely seen beast. Now every other game seems to be a roguelike or at the very least have roguelike elements to it. I love these games, being able to dip in, do a few runs and experience a fresh game every time you play is brilliant.

I will be honest, ScourgeBringer kicked my ass and it’s rather distinctive compared to other roguelikes I have played recently. ScourgeBringer is an action platformer set inside a death-inducing roguelike framework. It’s like Celeste and Dead Cells had a baby and it’s hard as nails.

Roguelike Tropes You Come To Expect

ScourgeBringer is set in a mystical vessel that has descended on humankind and it is up to you, Kyhra, to delve into its depths, beat the machines, and rescue humanity. Each run is procedural and each run is different and as with all games of this ilk, it’s how you maximize your run that will decide your success or failure. There are shops, loot, blood alters and a plethora of uncanny characters that will make sure every run is slightly different. 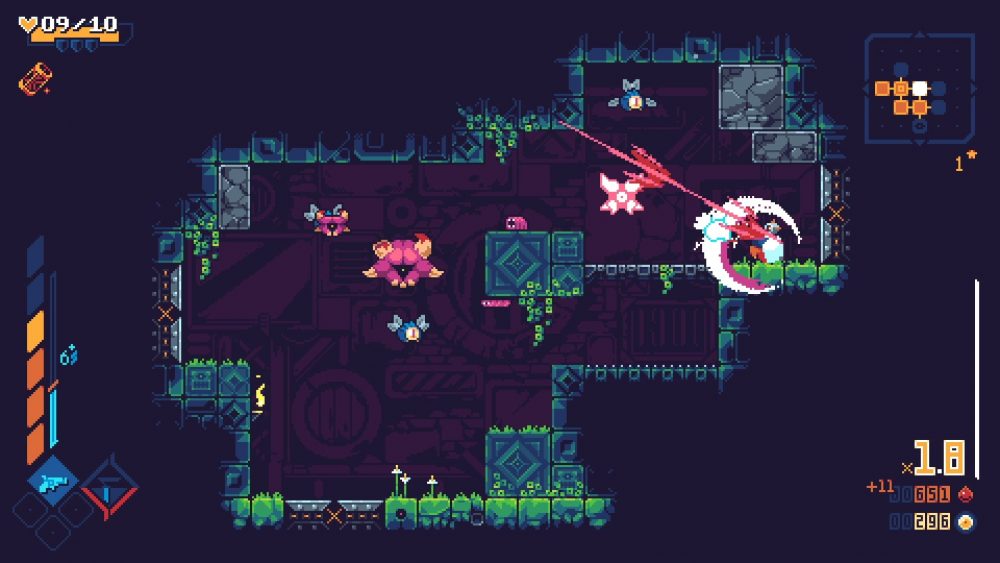 Let’s talk about the combat, boy, that sweet, sweet combat. It is utterly sublime. You can double jump, dash, slash, smash and fire your weapon. This all may sound very ordinary but it can all be tied together in the air keeping you in the air for what seems like an eternity. Combat becomes a mid-air ballet of blood and each chamber of ScourgeBringer becomes a mini-puzzle. Which enemies to target first? Which order to do each move and make each decision?

The catch to this system and what really started to make me better at the game is the order you kill things in each room and making sure you choose your attacks wisely. The dash attack stuns enemies, so my normal tactic when entering a room was to target the enemies that gave me the hardest challenge, using stun attacks, and then cleaning up the rest. You unlock other abilities like being able to parry projectiles back at enemies and a combo meter to increase your in-run blood currency and all these layers add up to something very moreish and tactile that I could not get enough of.

Your hard-earned currency can be spent in various randomly generated shops throughout each of the game’s zones. Better guns, more attack power, more health and an all manner of game-changing loot is yours to acquire if you have the blood to pay for it.

Keeping your combo high, not getting hit, and killing with style will maximize blood returns so the game is a cyclic affair. As you get better at the game you naturally acquire more blood, which you can spend on better upgrades, creating a cycle of getting better and becoming stronger. 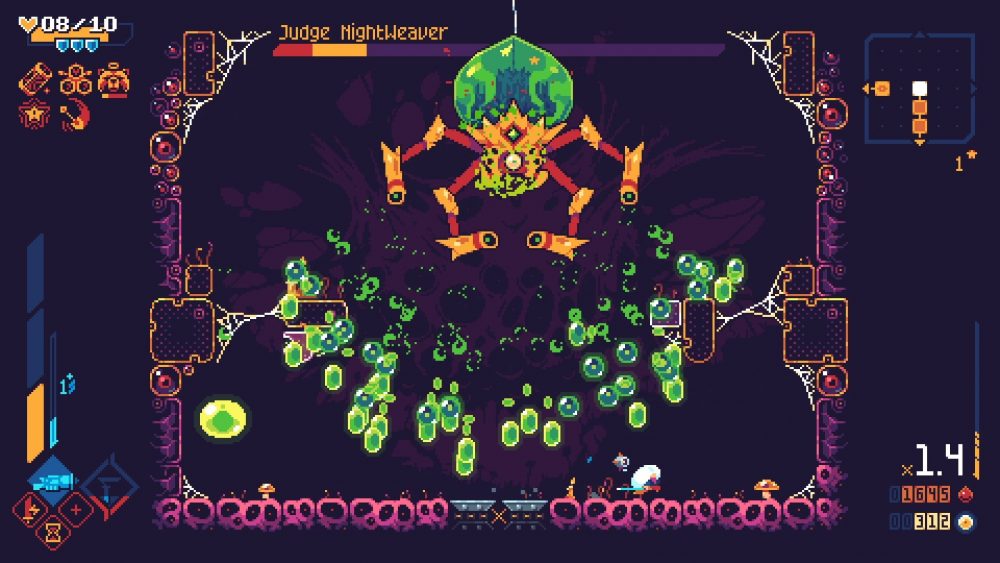 As expected, you will die in ScourgeBringer, and you will die over and over again but luckily, as with the best roguelikes, you get to permanently upgrade Kyhra to make future runs easier. Between each run, you can use your Judge Blood currency to unlock new techniques and skills at the Chiming Tree. This area is also occupied by a bloke with a beard who gives you hints on a boss who just destroyed you and other helpful in-game tidbits.

Even though ScourgeBringer is quite difficult, it’s only Dead Cells or Dark Souls difficult and what I mean by that is it only seems difficult on the surface. Once you get to grips with the game’s systems and start to learn how it all works you progress at a steady rate. If you are willing to put the time in and dare I say it, get good, then you will reap the benefits.

There’s even this weird little bloke who now and again shows up and throws you loads of upgrades. A way of the game saying, “I know you are rubbish, have some free stuff!” 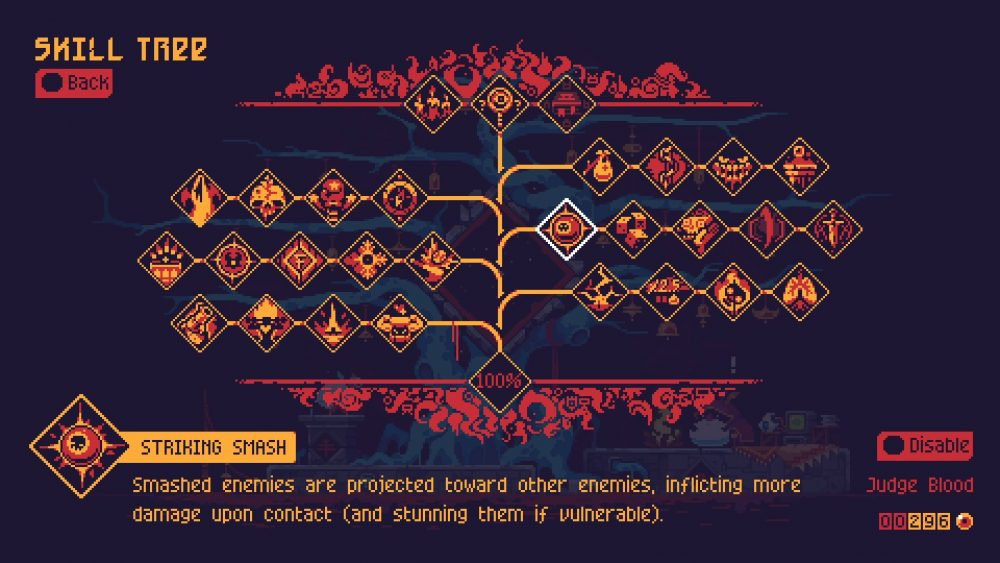 I can not say enough about the art style of this game. It’s simply stunning. I know, I know, pixel art is well overused these days but there is good pixel art and bad pixel art and this example is to die for. It reminds me of Celeste or Towerfall with the game being animated beautifully. ScourgeBringer oozes character and is a feast for the eyes.

ScourgeBringer has a beautiful array of musical tracks to accompany your death, destruction and bloodletting. Timid, eerie numbers are interwoven through thrashy, rock tracks. The music perfectly heightens the combat sections and makes the boss battles extremely tense affairs. The music and art style really stands out here. The presentation as well hits your eyes and ears and they envelop you in this fast-paced murder machine.

This game does have a few downsides, for a start, I think the difficulty may put some off. It is the same for the learning curve. A lot of players will maybe shelve it for something else before they see it blossom. ScourgeBringer takes some work to get going but it is worth it. I also think, compared to a lot of roguelikes, especially in the first few areas, there could be a bit more variety in enemy clusters. Both of these things are minor in my eyes but to others, they may way more heavily on their enjoyment. 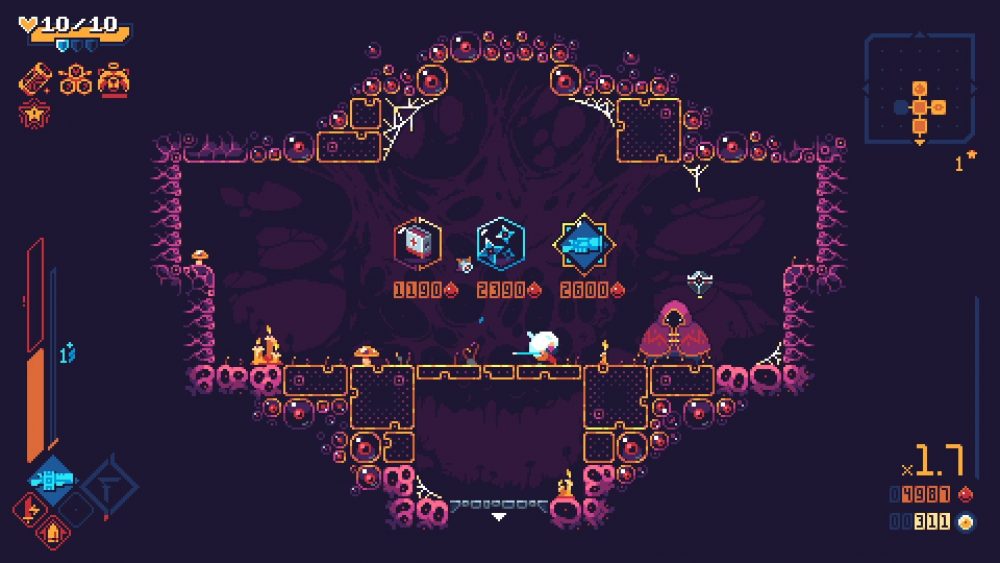 Something Special Hidden Down Under

ScourgeBringer is brilliant. It will slap you around silly with its difficulty, but if you stick with it and get used to the systems the game will blossom as you continue to play. At some point the game will just ‘click’ and when it does you will find your hands take over and you will be able to completely destroy a room of enemies in one long, mid-air combo. It’s elegant when it happens.

I highly recommend this game to anyone who likes roguelikes. It’s beautiful, runs flawlessly, and will keep you entertained for hours and hours. Just go and buy it, unless you are after something chilled and just want simple fun, then perhaps try something else. ScourgeBringer requires patience and dedication and, in my humble opinion, is well worth the effort.

Scourge Bringer is available now on PS4 and is playable on PS5 via backwards compatibility.

Hard as nails, beautiful and rewarding. ScourgeBringer may take some work to adapt to but it is well worth the time and effort required. The combat is poetry in motion and you always feel you are progressing, albeit, at times, slowly. Either by your skills improving or through the persistent upgrades you unlock you are rarely standing still. In a crowded roguelike market, ScourgeBringer is towards the top end of the list of games you should give a go.