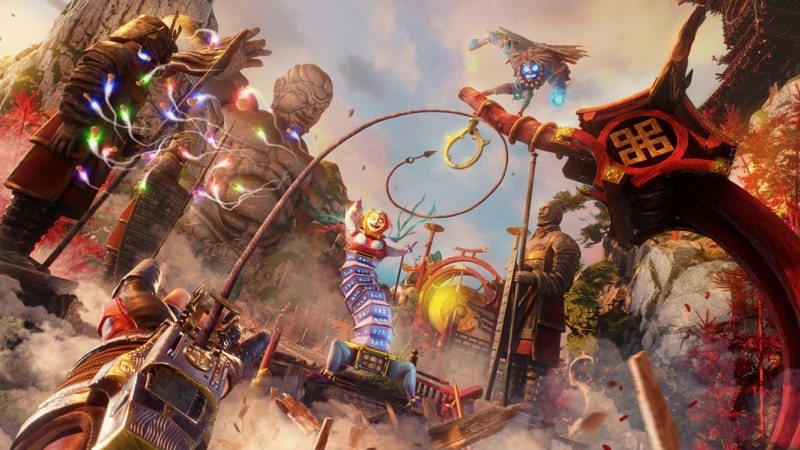 Shadow Warrior 3 PS4 review. Shadow Warrior 3 is an old-fashioned box-ticker of a shooter. It wants to please a certain crowd and goes out of its way to do so. Perhaps it should have played a little hard to get instead though.

Games have evolved in so many ways, yet there’s always the pull of big flashy games packed with nostalgia and comfort trying to pull progress back into its gaping maw of banality. There’s nothing wrong with a bit of flirtation with gaming nostalgia, maybe even a nice cuddle in its warming embrace, but you can go too far, and before you know it, you find yourself sliding through nostalgia’s slimy intestines. At least you’ll be warm.

Shadow Warrior 3 is a game that slathers on the nostalgia and comfort, and subsequently lured me towards it by saying all the right things. It gave me its come-to-bed eyes, whispered promises of fast-paced, action-packed, kerazy shooting with over-the-top weapons, splatasttic gore, and a large dollop of ridiculously puerile humour. I like these things, especially in games. I love Bulletstorm, I spent an unspeakable amount of time playing Duke Nukem 3D in my teens, I pine for more games with those qualities. But just as I was thinking about going feet first in its slobbery maw, I saw it for what it was. It was trying far too hard to impress me when I wanted it to show its natural qualities a bit more often. 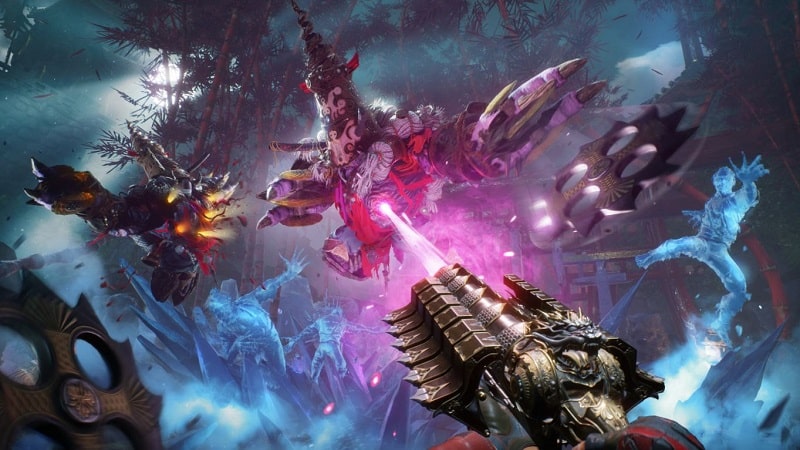 This third entry sees a disconsolate Lo Wang feeling a bit down about the impending end of the world after he messes up killing an ancient dragon. At his lowest ebb, he finds kinship with an old foe, and they set out on a mission to resurrect Wang’s dead buddy, and slay the dragon. That mission will have to go through a parade of colourful and violent demons with a selection of extra meaty weapons.

In terms of gameplay, Shadow Warrior 3 ramps up combat encounters to chaotic levels. It continuously funnels the player towards arenas where multitudes of demented hellspawn materialize in waves so Lo Wang can slice, shoot, blast, and pummel them into meat platters. It’s a sensible step back from the more open areas of Shadow Warrior 2, and a little closer to the series’ roots.

The arena shooting sometimes outstays its welcome, with a wave or two more than feels necessary thrown in before moving on. The parts in between dissolve the specter of monotony to some degree. Lo Wang can swing across chasms with a grapple hook (‘feels like everyone’s got one’ he remarks when quizzed on it), and can run across walls at set points as well. These traversal options do add some extra flavor to arena battles when they are viable strategy. It ends up as a melting pot of Doom Eternal and Titanfall 2’s best ideas, but in a slightly diluted form. 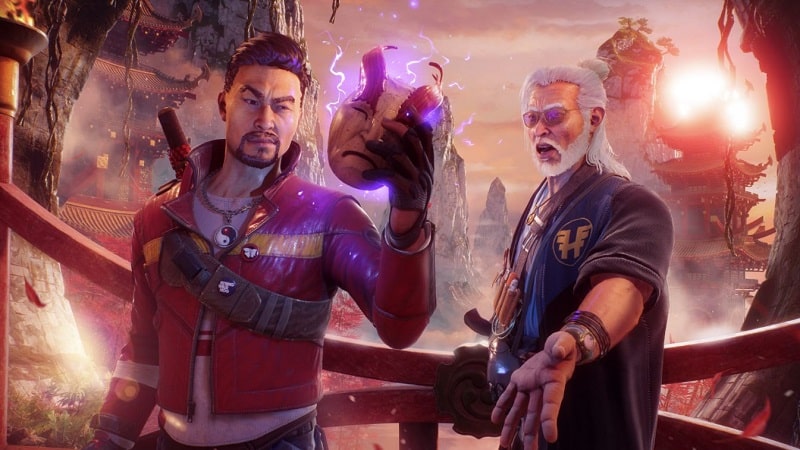 When it gets going though, oh boy does it work a treat. The weapon set grows ever more outlandish and brutal. Flying Wild Hog hand out a new death-dealing treat on a fairly regular basis, whilst Lo Wang can, when properly charged, rip out parts of enemies and use them as makeshift weapons. It’s fun to use pretty much all the weapons, and generally useful to switch between them on the fly. From buzzsaw-flinging crossbows to high powered rifles that explode enemies into bloody chunks, and finishing off a group with a swing of a katana, Shadow Warrior 3’s chaotic intensity can be an exquisite experience.

The general flow of gameplay is great when you’re directly in control, but too often control is needlessly wrangled away from the player for another juddering cutscene and a good chance of a rather lame pun or two.

You’d think that three games in, Flying Wild Hog’s Shadow Warrior series would ease off trying so hard to be stupid funny. Partly because I get it, it’s goofy and rude, they told me this two games ago. More of it isn’t really doing anything. It’s also because it’s not managed to up the hit rate on jokes. Instead, Shadow Warrior 3 throws ‘jokes’ at you with Gatling gun-like pace, and the sheer number of them being fired out ends up boring instead of perforating. 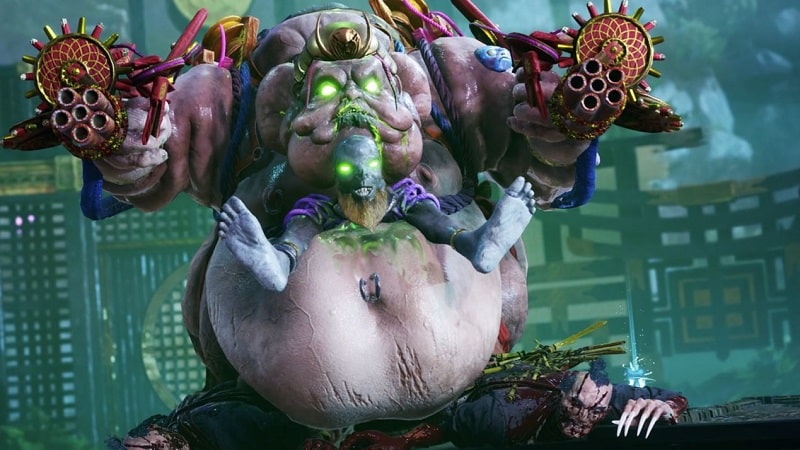 Relentless amounts of anything has a limit. You can’t do 5 hours of intense horror game chase scenes without diminishing impact, for example. Just like you can’t continuously chug Leffe Blonde for an entire evening without literally getting sick of it. Even though Shadow Warrior 3 is a very breezy game and is absolutely joyously funny in moderation, there’s simply not enough variety to sustain its effects over the handful of hours it takes to get through its story.

Despite this drawback, Shadow Warrior 3 is a good time. Largely forgettable once finished, but it works well as a palate cleanser between heavier titles. What’s admirable about that is however I might feel about the amount of each ingredient plopped into this retro-tinged soup, it’s undeniably achieving what it set out to do. It may not be the best example of what it is, but generally, it gets things right.

Shadow Warrior 3 is out now on PS4.

Shadow Warrior 3 isn’t lacking in bombastic, blood-splattered shooting or giddily puerile humour. It comes up a bit short in gameplay variety and its scattershot approach to jokes produces more than a few misses, but as a fairly relentless and compact first person shooter with its heart beating to the drum of nostalgia, it’s a pretty tasty morsel