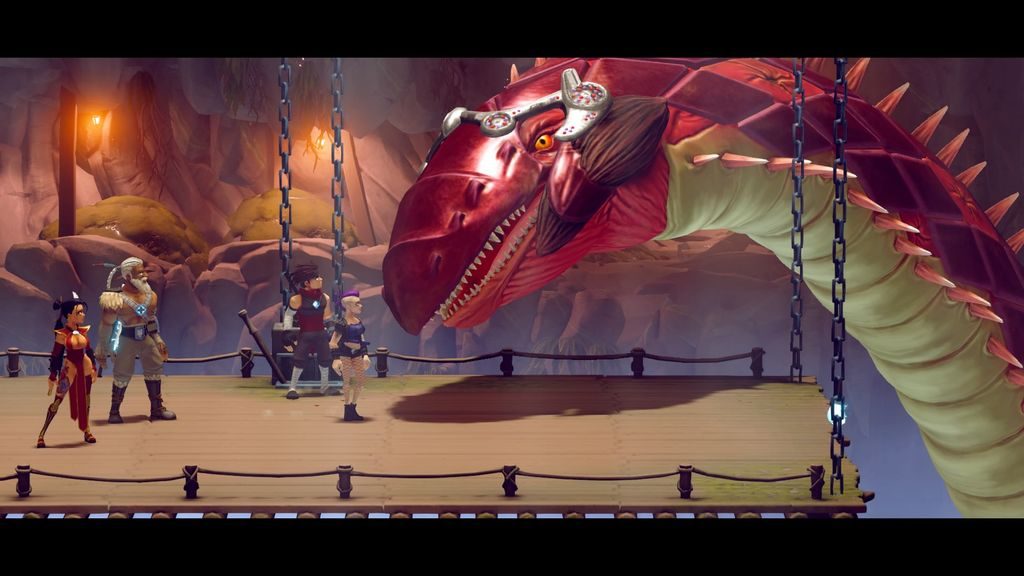 Shing! PS4 Review – Mass Creation, known for titles such as Corridor Z and Draw Slasher, have recently made their most comprehensive entry into the gaming mainstream. With Shing! the indie developers have now gracefully dipped their toes into the world of co-op beat ‘em ups made famous in the arcades by the likes of Double Dragon and Golden Axe.

However, though Shing! will prove stylistically familiar with old school gamers, the title isn’t without its modern tweaks as it demonstrates the fruits of a new creative direction for the Polish team.

The art style has an immediate charm. The overall aesthetic of the game is clearly eastern inspired although the character design is closer to a westernised anime such as Nickelodeon’s Avatar: The Last Airbender. Additionally, the backdrops feel vibrant and deep; they breathe life into the genre-typical never ending scrolling floor.

The character’s design and personality aren’t particularly original, though are nevertheless investable. The music parallels the art style and mixes traditional eastern music with modern western production. The overall style of the game is well aligned with its pumping synth-wave hybrid soundtrack.

The only sore amongst the immersive features of the game were the repetitive designs of the enemies. Whilst there is a good array of enemy models, the player faces off against the most similar ones far too often. Furthermore, I couldn’t help but feel the repetitive ogres that come at you looked slightly uncanny. The game clearly has a comic blueprint to its design but despite that I felt this particular model was a little off key.

The remarkable part of Shing! is in its core loop. Chaining different strikes and combos with the right analog stick is bizarrely satisfying. However it’s difficult to deduce whether it’s the unfamiliarity with the control scheme or the sensitivity that had me occasionally attacking the wrong way. I’ve landed on the former, since the controls seemed to mostly work well under pressure.

The game rewards you with style points and power ups to motivate you into exploring the full array of your attacking potential. However, it hardly needs to if you’re playing single player. Even on the normal difficulty you’ll find it is sink or swim in regards to grasping the move set. Indeed, juggling enemies in the air I found particularly entertaining.

Parry systems are the combat mechanic I try to master first in video games. The titular “Shing” noise gives the cue as to an enemy attack, and your timed counter makes for a worthwhile flourish. However, I couldn’t help but wish that unblockable attacks used a different sound to distinguish themselves. Despite this, the sound effects generally provide a satisfying feedback loop for your efforts.

The game throws at you a variety of enemies that require unique strategies to quell. Though the AI is mostly uninspired, you will find yourself occasionally overwhelmed by sheer volumes and variety. The challenge is often a puzzle as you have to figure out the appropriate priority of targets. These constant adjustments demanded I found to be highly engaging. Additionally, the use of power-ups (ranged and bomb attacks) further contribute to what was an addictive gameplay loop.

Unfortunately the enemy AI seemed to go “dead” on very rare occasions. Perhaps this is something that could be patched up via update.

To accompany you on this hack and slash adventure is a comically thin plot. Beginning with a classic macguffin, the tale follows a basic retrieval quest narrative. The story is really only there to heighten the sense of progression as you battle through escalating challenges. In spite of this, the humorous dialogue between an affable cast of characters really shines through. I found myself chuckling regularly during these intervals.

Small puzzles provide welcome breaks from battling the horde. Furthermore boss battles are well placed and fun to tackle, although occasionally are cheaply reused as regular enemy types. The game also includes optional mid-level challenges which further serve to teach the nuances of the game’s combat. I found these very useful but at times incurably frustrating.

The game’s difficulty or enemy amount doesn’t scale with the amount of player characters. As a result of this, some challenges don’t feel compatible with the party size. For example, a challenge I rage quitted on single player was an absolute breeze when I returned to the challenge on two player co-op.

A Fantastic Fighter For Friends

Friends playing local co-op will have no dull moments, and there are four difficulty settings to suit different party sizes. Despite mostly playing though solo, Shing! provided me with entertaining play-through and a satisfying learning curve.

However, the game is simply not as well adjusted for a lonesome play through as it is for multiplayer.

Shing! is currently available on PS4.

The art style, combat and humour make for a highly entertaining experience for anyone interested in a co-op experience with a retro brawler feel. Despite not having the same single player appeal and a couple of short comings this time round, Shing! is a promising new IP that can only improve its formula for future iterations.