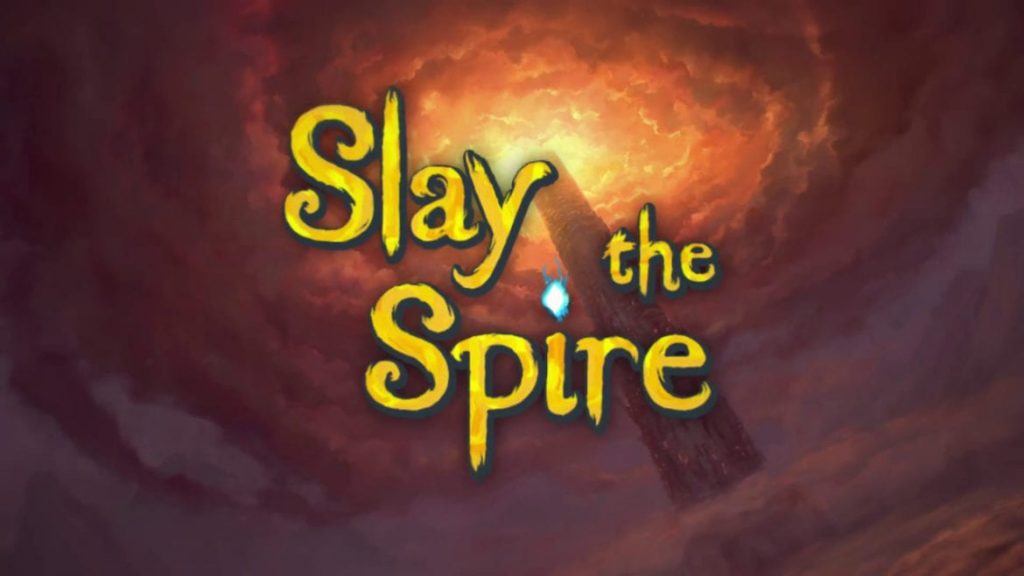 I feel like I’ve been spoilt – properly, massively spoilt. Until now, deck building games have not held much allure for me – whether it was Hearthstone, Gwent or Hand of Fate, it’s fair to say that I greeted each with the sort of excitement one might exude if they had to eat a turd sandwich for lunch (or indeed any other time of day). Therefore it would take a supremely rare offering to rally my attention, and Slay The Spire is absolute that and then some.

Slay The Spire doesn’t just raise the bar, it breaks it over the head of its genre brethren, stands atop the skyscraping pike of their corpses and places a new one – a golden, soaringly high standard that looks set to remain unbeaten for years.

Slay the Spire soars as high as it does not just because it’s a incomparable card-battler, but also on account of the fact that it blends in stellar roguelike mechanics to create an offering that far exceeds the sum of its parts.

The premise of Slay the Spire is as its name suggests – the goal is to climb up a tower and slay the titular Spire before moving onto the next act. Climbing the tower is no easy feat, with multiple paths available to you on your ascent to its peak, you’ll find yourself fighting various enemies, tackling elite level foes, taking part in surprise events and uncovering a range of intriguing secrets. Though Slay the Spire has three different characters to choose from, at the beginning of the game only one is selectable – The Ironclad, while the other two, The Silent and The Defect both remain locked until you’ve completed playthroughs with each character.

When combat kicks off in Slay the Spire, the player is presented with a deck of cards that straddle a number of different categories such as attack, defence, skill and power. In addition to the unique properties of each card, an energy rating is also assigned which means that you can only play as many cards as you have energy for (the default energy reserve is three points).

Running parallel to the cards and the manner in which players can use them is the idea of enemy intent. Floating above the heads of every foe you face is an icon that corresponds to the action that they will take next; a weapon indicates an attack will come next, a shield points towards a defensive posture and question marks mean that you won’t know what they intend to do next. As such, the key ingredient to any kind of success in Slay the Spire is playing cards that act contrary to the intent of your enemies. If an enemy is going to strike, then shore up your defences; if they are going to defend, then pummel them with as many attacks as possible.

Of course like any deck-building effort, the fortunes of the player are ultimately subject to the dreaded spectre of RNG – after all, you can only do so well with the cards you’ve got. Slay the Spire negates the effect of RNG to a great extent by simply allowing players who are prepared to stand a far better chance than those that simply aren’t. From the building of a deck, to knowing when to use what potions when and collecting relics which provide passive bonuses and effects in every fight, Slay the Spire fully equips the player to succeed, so when the wicked RNG does eventually strike against your interests, it never feels unfair.

That willingness to allow players to define their own path to victory, is prismatically represented in the three characters that you can choose from at the beginning of every playthrough. Each of the three heroes is very different from one another in terms of stats and starting boons – the Ironclad heals some health at the end of every fight, the Silent draws an additional two cards at the start of every fight and finally, the robotic Defect begins every encounter with a channeled lightning orb that inflicts damage at the end of every round. Every character is different and every one demands a unique approach be taken.

This prismatic approach is brilliantly reflected in the various enemies you’ll tangle with too. A veritable horde comprised of some deeply varied bad dudes, each enemy has its own strengths, weaknesses and idiosyncrasies that, more than often not, are built around the subversion of Slay the Spire’s base tenets. For example, you’ll get some enemies who attack you with negative status effect cards which get shuffled into your deck, eventually forcing you to play them as they flood your hand. Another example are the elite monsters, each of which possess a range of dynamic abilities that shift and change during the fight; constantly forcing you to improvise on the fly.

And then there are the Spire bosses themselves – extremely powerful, multi-faceted enemies that demand your character to be effectively developed with a mind for shifting strategies to match, once beaten not only do they yield significant material rewards in the form of money and empowering relics, but they also provide satisfaction in the form of a pure, unadulterated hit of euphoria. A true gaming moment if there ever was.

If all this sounds like it might be overwhelming, Slay the Spire’s provision of a sophisticated, fantastically well-balanced deck-builder is matched by its commitment to making it all clear and effortlessly easy to understand. After a brisk though informative tutorial sets out the basics of the mechanics and how things hang together, the easy to navigate menus coupled with bright colourful cards and a vivid UI all entail that Slay the Spire is never less than a constant, breathlessly easy offering.

Like all the best roguelikes, Slay the Spire not only knows how to reward you after each attempt, but it has an innate understanding of second guessing what the player wants to do next. Though the experience points provided for each playthrough lead to the levelling up of each character provides a range of additional, more powerful cards to use in future attempts, and in turn provides a persistent progression backbone for the game, it is in the numerous carrots that are dangled in front of the players nose where Slay the Spire truly excels.

Between fights Slay the Spire shows a progress map which shows the paths one can take to the top of the tower. Along that path, treasure chests, points of rest and card upgrade zones can be spied – allowing you to plan the best way through in order to yield the most productive and result for your character and by proxy, giving you something to look forward to.

Throwing an entertaining wrench into these proceedings are the unknown events strewn along each trail which conjure all manner of odd happenings – from goblins mugging you, to ancient traps, tombs, treasures and other such discoveries, each of them has a risk/reward component that makes you look forward to discovering the next event.

Beyond the irresistible pull of the pursuit of loot and glory in the standard campaign mode itself, Slay the Spire augments its offering with an Ascension mode which triggers once you complete the game. Essentially a riff on the New Game Plus mechanic, Ascension lets players tackle the campaign with more difficult enemies which in turn proffer much more powerful cards and rewards when vanquished. The kicker here though, is that Ascension only triggers on a per character basis, and so Slay teh Spire does a slyly grand job of making you want to play, and become accustomed with each of the trio of heroes.

Further afield, Daily Climb and custom game modes provide yet further additional length and value. Daily Climb provides daily challenges that force you to play as a specific character with a range of modifiers – such as debuffs for resting at rest sites, only certain cards being available in your deck and so on, while the custom game mode allows you to completely tweak and tinker a playthrough to your own liking. In short, Slay the Spire offers potentially hundreds of hours of play and in a game as great as this, that is quite the reason for celebration indeed.

For someone who has previously found the mere notion of a deck-building game exhausting, let alone entertaining the act of actually playing one, Slay the Spire is nothing less than a revelation. Betwixt its superior melding of deck-building with roguelike beats and the effortless, deeply welcoming fashion which acclimates even the most obstinate opposers of the genre, Slay the Spire feels akin to an old friend whose seemingly limitless depths are only matched by the warm generosity of its embrace.

So look, put down the controller, stop typing, don’t worry about anything else you have to do and clear that social calendar – Slay The Spire beckons and if you heed its call, you’ll discover one of the finest games the PS4 has ever produced. I used to hate deck-building games, but Slay the Spire has made me a believer and i’m not sure I’ll ever stop playing it.

As far as a score goes – was there ever really any doubt?

A sublime, impeccably crafted roguelike card-battler that is absolutely without peer, Slay the Spire cements its place as one of the best games of this console generation. This. Is. Essential.