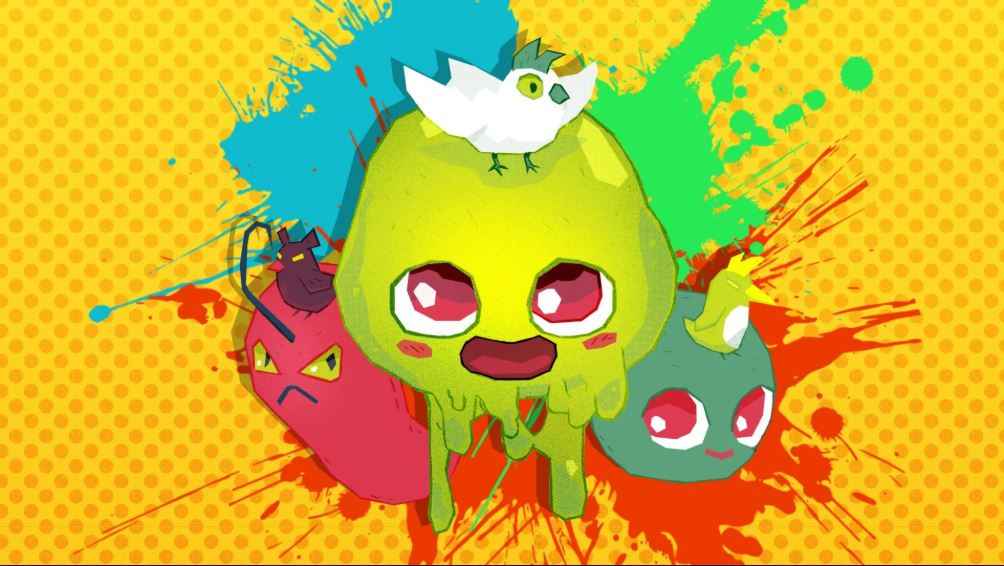 Before we get started, there is one thing you need to know about Slime-san; it’s utterly and totally balls to the wall crazy. I mean, take the premise for example – as a sentient lump of slime (don’t ask) that finds itself consumed by a massive worm, the goal is to escape from the innards of the burrowing invertebrate by way of jumping, slipping and sliding your way outta there.

With it’s wacky premise and strangely endearing ZX Spectrum aesthetic, Slime-san is an odd duck to say the least, but peer behind its raft of idiosyncrasies and you’ll spy a ruthlessly entertaining platformer overflowing with value and charm that soon reveals itself as an essential prospect for fans of the genre.

For those who have found themselves accustomed to the likes of the aforementioned Super Meat Boy and 10 Second Ninja X, Slime-san makes a similar impression; doling out screen based stages borne out of platforming nightmare which must be exited before proceeding onto the next. Boasting an arguably gentler difficulty curve than those titles that serve as its inspiration, Slime-san starts the player off slowly, encouraging them to stretch their platforming muscles and educating them on what they can and can’t do as it relates to the parameters of every level.

Throughout the majority of Slime-san’s challenging chambers one thing remains consistent, the need to avoid the color red and the equal need to phase through the color green by pressing the correct button the controller. Built almost entirely around this central concept, Slime-san plays with creating all sorts of obstacles, moving platforms, pushable blocks and more in these two colors to challenge the player in numerous ways and the result is well over 100 levels that boast as much challenge as they do satisfaction for completing them.

Neatly complimenting the increasing sophistication of Slime-san’s levels is the fact that the titular character is blissfully simple to control. Blessed with the sort of pixel-perfect platforming seen in other comparable titles of this ilk, our gelatinous hero is wonderfully responsive, with sensitive depressions of the jump button causing him to immediately jump as high or as far as you need him to. Throw in the ability to dash, air-dash, climb up walls and stick on surfaces alongside a range of other tricks, it soon becomes clear that Slime-san’s protagonist is every bit as agile and capable as you want him, and more importantly, need him to be.

Beyond the imperative to get the heck outta dodge on every level, there is also an irresistible need to collect the various apples that are tactically dotted around the place too, not least because they can be parlayed at the local shop (however it got there) to buy modifiers that affect your play style. Caution must be taken here however, as these modifiers almost always buff something at the expense of something else. Enabling a longer jump for example, might give the side effect of preventing Slime-san from jumping quite so high, so it always behooves you to know exactly what you’re getting when you dish out your hard earned apples.

In addition to a series of different play style enablers, the apples that you collect in each of Slime-san’s levels can also be used to unlock different color shaders (Slime-san has a very handy colorblindness mode to aid visually impaired folks), and a range of outfits too – all of which can be obtained in Slumptown; an aptly named dour hub of sorts that you’ll be spending most of your time when you’re not beating Slime-san’s fiendishly array of well-designed levels.

And you’ll need Slime-san to be capable too, because in addition to the unique wealth of hazards that you’ll have to navigate on each and every level, there is also a soft time-limit to deal with. Not finishing any given level quickly enough will cause a veritable wall/lake of stomach acid to quickly flood the screen which (lest we forget you are inside a massive stomach), as you may have guessed, is totally fatal should you even dip a single pixel into it. Though thankfully restarting a screen is both instant and easy to do.

As such, with its obvious designs on efficient platforming and high speed completion, it should come as little surprise that Slime-san lends itself extremely well too speed-running activities, and with this in mind, I fully expect a PS4 speed-running community to form around Slime-san in earnest. Further bolstering Slime-san’s already muscular offering on PS4 is the fact that this is Suplerslime Edition version of the game which packs in a total of no less than 160 levels, new game plus mode, speed running modes, boss rush modes and a trio of sizable campaign expansions for players to get stuck into.

Providing yet further value still are the new mini games that have been generously stuffed into this version of the game. Able to be played by collecting coins which are dished out throughout the main campaign, this edition of Slime-san lets players play a range of classically inspired mini-games which not only stand up pretty well in their own right, but can also be played with friends too. Krazy Karting for instance is a direct and loving nod to Nintendo’s Mario Kart series, whereas GLOOM is, well, a toweringly odd take on id Software’s magnum opus, DOOM.

In short, Slime-san: Superslime Edition gives you more than enough bang for your buck and then some, and then some more for kicks.

Ultimately, as with any high-speed platformer worth its salt, Slime-san is a dab hand and making you swear and wish you could inflict some fairly hefty violence on your controller and the environment around you. As a result, Slime-san will struggle to appeal to those whose tempers have ensured that they typically shy away from such games, but for those willing to plumb the depths of its wonderfully substantial offering, Slime-san: Superslime Edition makes a compelling case for one of the most pleasant surprises of the year so far.

If you enjoyed this Slime-san: Superslime Edition review, why not take a peek at some of the cracking indie games you can get for your PS4 in our handy feature.

Overlowing with challenge, value and charm, Slime-san: Superslime Edition effortlessly cements its place as one of the premier 2D platformers on PS4.