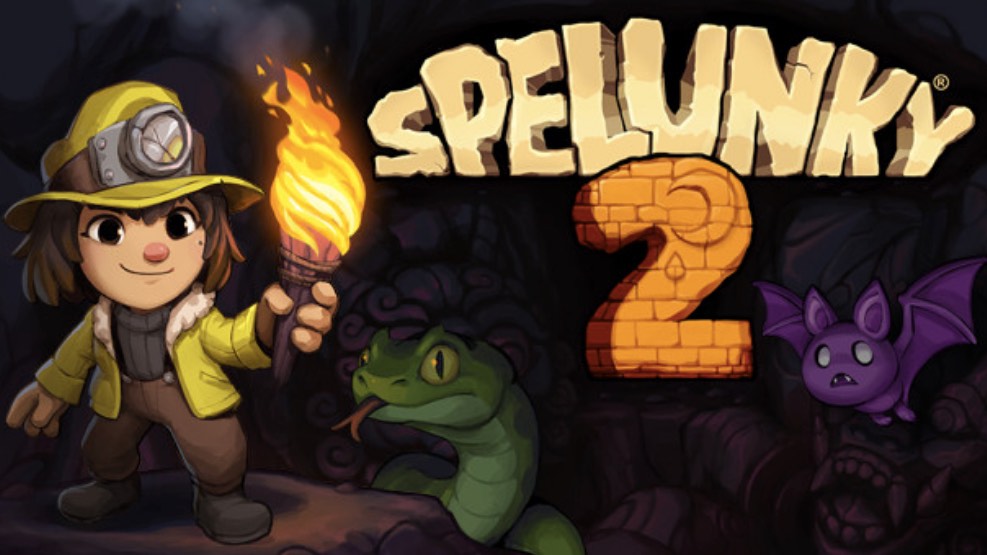 Spelunky 2 PS4 Review – At the time of writing this review I have died in Spelunky 2 847 times (I counted). Whether by rock, shock, fire, impalings, explosions or a myriad of other ways, it’s no exaggeration that I’ve become quite adept at shuffling off of my mortal coil a fair bit in Spelunky 2. Despite such wanton death and the failure that invariably follows, each death in Spelunky 2 isn’t a cause for anger or pad-grip slackening listlessness but instead a lesson whose import is gleefully learned.

Simply put, dying in Spelunky 2 is almost welcomed because it brings with it the promise of enlightenment, of precious knowledge about the cruel array of monsters, traps and other quirks that the game throws at you. This, among many other reasons, is why Spelunky 2 is one of the greatest roguelikes ever made.

For casual players of the original Spelunky and those who have lost hundreds of hours to Mossmouth’s ruthlessly entertaining roguelike, Spelunky 2 will appear reassuringly familiar at first – akin to slipping into a warm bath that gives you a sharp pang of heat as you settle into it.

Sure enough, Spelunky 2 doesn’t seek to alter the pixel-perfect platforming mandate and ultra-responsive controls of the first game, thus opening the door to muscle memory to take over for veteran players in lieu of actual experience with the game. And for a while, this works. With increasing bravado and vigor, practised hands will find themselves bopping snakes on the head, dropping bombs to blast free gems and throwing up ropes like its 2013 again. It’s at this point then (or a bit before, if you were never that good at the game in the first place), that Spelunky 2 pulls back its size 16 boot and swings it forward up into a vicious arc between your legs.

Spelunky 2 then is painfully difficult – and certainly much more challenging than the first, but with that increased difficultly comes a renewed and endlessly rewarding sense of discovery. Perhaps nowhere is this sense of discovery and wonder better embodied than in the new denizens that you’ll encounter during your spelunking activities.

Whether it’s the terrifying new mole with its sunken eyes and ‘spades for teeth’ that burrows its way through the level, only to spring up and out of the ground in a frenzy when you least expect it, or the horned lizards which come barrelling towards you like a yellow skinned Sonic the Hedgehog on krokodil, Spelunky 2’s new cast of fiends are certainly something to behold and develop strategies for in earnest.

Of course, this wouldn’t be Spelunky without traps and boy oh boy, developer Mossmouth has absolutely doubled down here. Though the spike pits and arrow spitting traps from the original game make their ignominious return, they find themselves in equally fiendish company. From tiki-towers that throw retractable fists at you through to Egyptian block traps which can crush you against the ceiling or floor, Spelunky 2 has an alarming number of ways to see you to your end without ever having you come afoul of an enemy.

So enemy and traps, right? That’s basically Spelunky just turned up to eleven? Not quite. In addition to fearsomely expanding its roster of villainous moon-based baddies and traps that would give Indiana Jones fits, where Spelunky 2 really excels is in how it blends the two into something of a twisted, living, breathing and often, dying world that presents something of a macabre playground for players to witness.

Be ready to look on in a mixture of horror and giddy delight as moles burrow their way through the level only to impale their stupid mole faces on spikes, or when a caveman charges at you, but falls down the pit in front of them (because they’re cavemen) only to trigger a bunch of traps on the way down.

Though hilarious then, these sorts of interactions hint at a broader spectrum of creative possibilities that are available to the player. See an arrow trigger trap but don’t know how to get it past it? Simple, just pick up the stunned body/corpse of a nearby a mole and fling it at the trap to set it off. There’s almost no end to how creative you can get in Spelunky 2’s almost peerless sandbox of nihilistic thrills and for that fact alone, Spelunky 2 feels like a true sequel that bountifully expands upon the premise of its predecessor.

Speaking of expansion, Spelunky 2 brings an absolute avalanche of worthy additions to the table, too. Players can now find themselves poisoned, a state of being which drains health from stage to the next, while the inclusion of newly engineered water physics provides ample mayhem to occur with deep watery caverns and, of course, lava flows and pools of acid.

Beyond such additions, Spelunky 2 also boasts a far wider range of NPCs now too. More than just the usual conclave of cantankerous, shotgun-toting shopkeepers that were such an iconic staple of the first game, players can expect to run into distressed turkey keepers (yes, you can ride turkeys in Spelunky 2) and enraged turban wearing warriors that will bludgeon your enemies to death with a random skull, to name just a couple.

There have also been some pretty wide-ranging changes to the level design now also. In Spelunky 2, many levels unfurl in a non-linear fashion, allowing players to duck out into side doors and hidden entrances which in turn reveal parts of the level which would have lay undiscovered. Sure enough, each playthrough results in procedurally generated, tile-based levels, but the way that each level is put together seems hand crafted in a way that far exceeds the much less elegant, procedural mechanics that are used for their generation.

Arguably, despite such massive additions to the game, Spelunky 2’s essence remains blissfully intact. At its heart, Spelunky has always been risk and reward – the art of knowing when you’ve taken enough from a level and then heading off to the exit, or, pushing yourself that little bit further in pursuit of further riches. In Spelunky 2, that sense of risk and reward is amplified further – do you bust your ass to save the pug and gain a heart, or, do you leave the dog behind and attempt to save your skin and plough through the level as quickly as possible.

Elsewhere, at it’s heart narrative heart (yes, Spelunky 2 does have a plot of sorts), Spelunky 2 is all about family. With a plot that has the offspring of the adventurers from the first game searching for their family on the moon, Spelunky 2’s hub sections aren’t just a neat place to practice your moves (and pat some good doggos), but also a charming way to watch the characters interact with each other in a way that is both twee and immediately endearing.

This theme of family stretches far beyond the constraints of the story too. Spelunky 2 is also by design very much a game that is to be enjoyed by the community, in the same way that From Software’s Dark Souls manages to achieve. There’s always some neat trick, such as using the corpses of your enemies as shields against traps or cooking turkey mounts for health for example, which take on a larger life when shared among the larger community.

Throw in daily challenges, seeded modes and a raft of online multiplayer modes and it becomes clear that Spelunky 2 has legs for days, months and perhaps even years. As such then, it’s only fitting then that as the first Spelunky ushered in an era of indie greatness at the beginning of the PS4 lifecycle, that its sequel closes out this current generation in an even more emphatic fashion.

Spelunky 2 releases for PS4 on September 15.

A thunderous sequel that surpasses its already incredible predecessor in every way that counts, Spelunky 2 is the ultimate roguelike and ruthlessly inventive platformer that never stops surprising and delighting those who pick up the controller. There are perhaps far fewer better ways to close out a console generation than this.