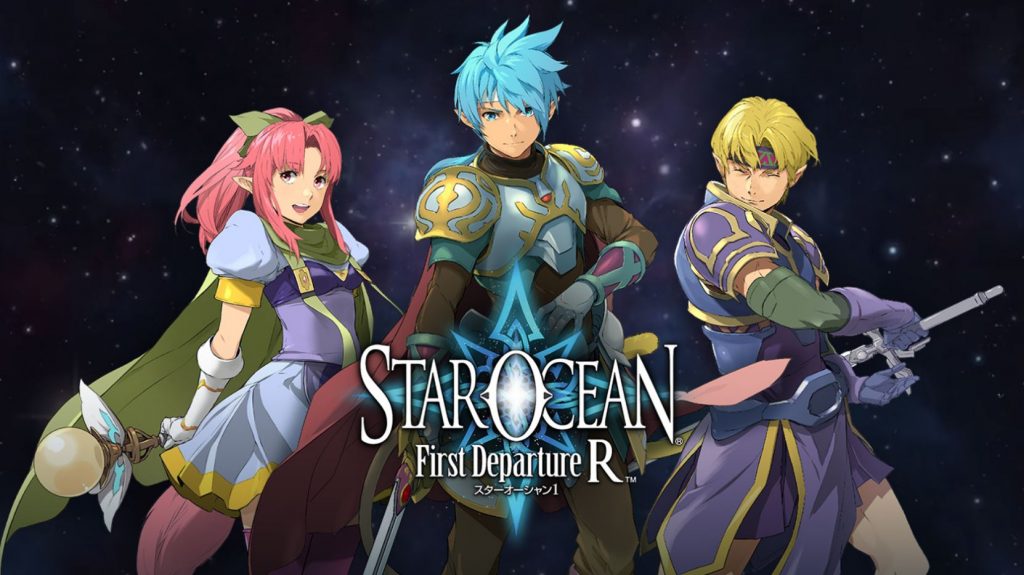 One must remember that Star Ocean: First Departure R is a re-release of a PSP game that released eleven years ago, which was then a remake of a Super Famicom title made in 1996. As such, you cannot expect a game like this to be on the cutting edge of innovation. At the same time, nostalgia cannot wash away all modern-day expectations either. The true question for Star Ocean: First Departure R is where does it stand between nostalgia and expectation?

Main characters Roddick, Millie, and Dorne find themselves in the midst of an epidemic that causes inhabitants of their home town to turn into stone statues. While searching for a remedy, they happen across two mysterious people, Ronyx and Ilia, who reveal to the would-be rescuers that their looming epidemic is currently out of their hands to cure. In the same breath, Ronyx and Ilia offer the trio an opportunity to leave their previous lives in order to find a way to stop the stone plague.

One of the best appeals of First Departure comes in its visual presentation. Many retro titles offer up limited, yet charming visual styles and animations, but First Departure goes beyond that. While running around in the world, characters have many extra details, from the way hair and clothes move to the different angles that sprites are animated from. This attention to detail goes a long way in helping folks to appreciate the game.

The narrative to First Departure R is far from unique. We have characters leaving home for uncontrollable reasons, gathering allies to aid in their journey, and defeating a massive threat to the universe. The down side to this is not necessarily the repetitious nature of storytelling but rather that nothing really puts this narrative over the top. Writing is fine and its ideas are fine as well, but even with its origin occurring literal decades ago, its limited presentation diminishes its potential audience almost strictly to Star Ocean fans.

One very important factor to consider with First Departure R is how simplistic its formula is. Combat is filled with spamming the same two abilities over and over or spamming Cross for repeated three-hit combos. Combat has a bit of depth beyond that, as you can quickly jump between your attackers by pressing Circle, but that option simply provides more abilities to use. Depending on what you might want from an RPG, difficulty may not be one of those things.

At the same time, the lack of depth in both combat and preparation for combat leaves a lot to be desired. Skills, which you can unlock through purchased skillbooks, provide you with increased stats, but they offer little else. Stat-wise, unlocking skills is essential to bettering your characters, but those skills offer very little to the formula outside of greater numbers.

The Give And Take Of Remake Updates

Character art does receive an update in First Departure R. New character thumbnails and Status screen models include brand new, updated art, which all look absolutely fantastic, even though the same updated art style didn’t find its way into the old anime cut scenes. Gameplay-wise, all visuals have been upscaled from standard definition to high definition. While the presentation doesn’t look high end or anything, the retro style keeps a clean and refined aesthetic, which makes for a great look.

Battle difficulty has been adjusted from the PSP version as well. What I experienced is actually something more like increased difficulty spikes. Much like the PSP version, nothing is innately hard in First Departure R, but moving from area to area requires leveling up more, creating a less streamlined flow. Granted, RPGs used to have this kind of difficulty where farming experience was needed to continue, but adjusting an old game in this way doesn’t do the source material any favors in a modern light.

Repetition rears its head early and often in Star Ocean: First Departure R, showing its roots as well as its true colors. Nothing really gets in its way in terms of succeeding, but the game doesn’t necessarily offer up much more than the bare minimum either. Simplistic combat, limited presentation, and nominal updates reduce the potential of this game to the fans of the franchise who missed out on the first remake, or those who want to relive the old game again. RPG aficionados looking for something simple could find something in First Departure, but don’t expect much more than a slightly polished remake of a remake.