I have to wonder the extent of focus testing that StarBlood Arena has had prior to release. You see, I fancy myself somewhat immune to the usual motion sickness maladies that are often associated with VR experiences. Resident Evil 7? Zero chunder. Driveclub VR? Puke free. VR Luge? My lunch resisted the temptation to take a holiday up through my gullet. Just ten minutes with StarBlood Arena however, and it felt like my stomach had swallowed a deep fat fryer, washed it down with absinthe and tossed the whole thing around in a roller coaster corkscrew.


If the surprising disappointment of my stomach rebelling against me wasn’t enough, it was the fact that disappointment could be found elsewhere in StarBlood Arena’s otherwise attractive seeming offering. A six degrees of freedom shooter (think Descent, or more recently, Sublevel Zero Redux), StarBlood Arena is simply too unremarkable to recommend to folks whom have already been spoiled by the superior offerings of RIGS and Battlezone VR.


Set in a sci-fi death arena populated by robots, aliens and your garden variety homo-sapiens, StarBlood Arena’s maxim is simple; strap yourself into a ship, get points to win and then use those points to upgrade your craft. It’s a simple enough premise all told, but the fact that the whole thing takes place in a full six degrees of freedom means that StarBlood Arena is a little different from other similar PSVR titles already on the shelves.

Because you are able to swoop, strafe, spin and loop, often doing each of those things simultaneously, enemies can be found everywhere around you and so the challenge lay in being able to consistently orient yourself, whilst avoiding enemy fire and returning some of your own in return. If moving about in all directions wasn’t enough to contend with, StarBlood Arena’s aiming system is predominantly tied to PSVR’s head tracking which means that, unless you fancy spending your time as a turret (this will get you killed and quickly), you need to effectively synchronise your targeting reticule with the furious movements of your ship in order to pull off a successful kill.

When coupled with the fact that you’ll be spending a lot of the time trying to prevent your lunch from re-emerging after the ten minute mark, you can begin to appreciate why combat in StarBlood Arena is actually, somewhat sadly, quite the chore to master and effectively practice at, leaving me less than convinced that six degrees of freedom style movement is suitable for PSVR gaming at this point in time.

Compounding these issues is the fact that the design of the twelve maps that you’ll be doing all of this swooping and shooting about in, is somewhat lacking to say the least. Much smaller than they need to be and bereft of any real environmental hazards or anything of the sort to make them stand out from one another, the dozen or so levels feel trite and uninspired with each one differing from the last in seemingly cosmetic terms only rather than in something meaningful in design and purpose.


Able to be played in either single-player or online multiplayer, StarBlood Arena lets players go at it in Standard Carnage (deathmatch), Team Carnage (team deathmatch), Invasion (a co-op mode where you fight off waves of enemies) or Gridiron game modes. Of the lot, Gridiron is the most refreshing as participants are divided into two teams with the objective of nabbing the ball and firing it into the goal of the opposing side; providing a nice counterpoint to the somewhat formulaic adversarial game types, since proceedings then revolve around control of the ball, rather than the typical kill-focused objectives of the Carnage modes.


Whether you’re playing Gridiron or regular Carnage game types, StarBlood Arena can yield moments of legitimate elation as you snatch victory from the jaws of defeat in close contests, or, finally do away with an adversary who had been getting the better of you for the whole game. Equally, StarBlood Arena does a commendable job of keeping players invested for the long-term with a progression system that lets the player buy gear upgrades (through randomised loot boxes no less), paint jobs and even new ships altogether with the hard won credits that they have earned. Medals are also awarded for particular feats, such as destroying a certain number of enemy craft for example, and tie directly into Trophies that are associated with them; providing yet further reasons to stick with StarBlood Arena beyond the first few hours of play. 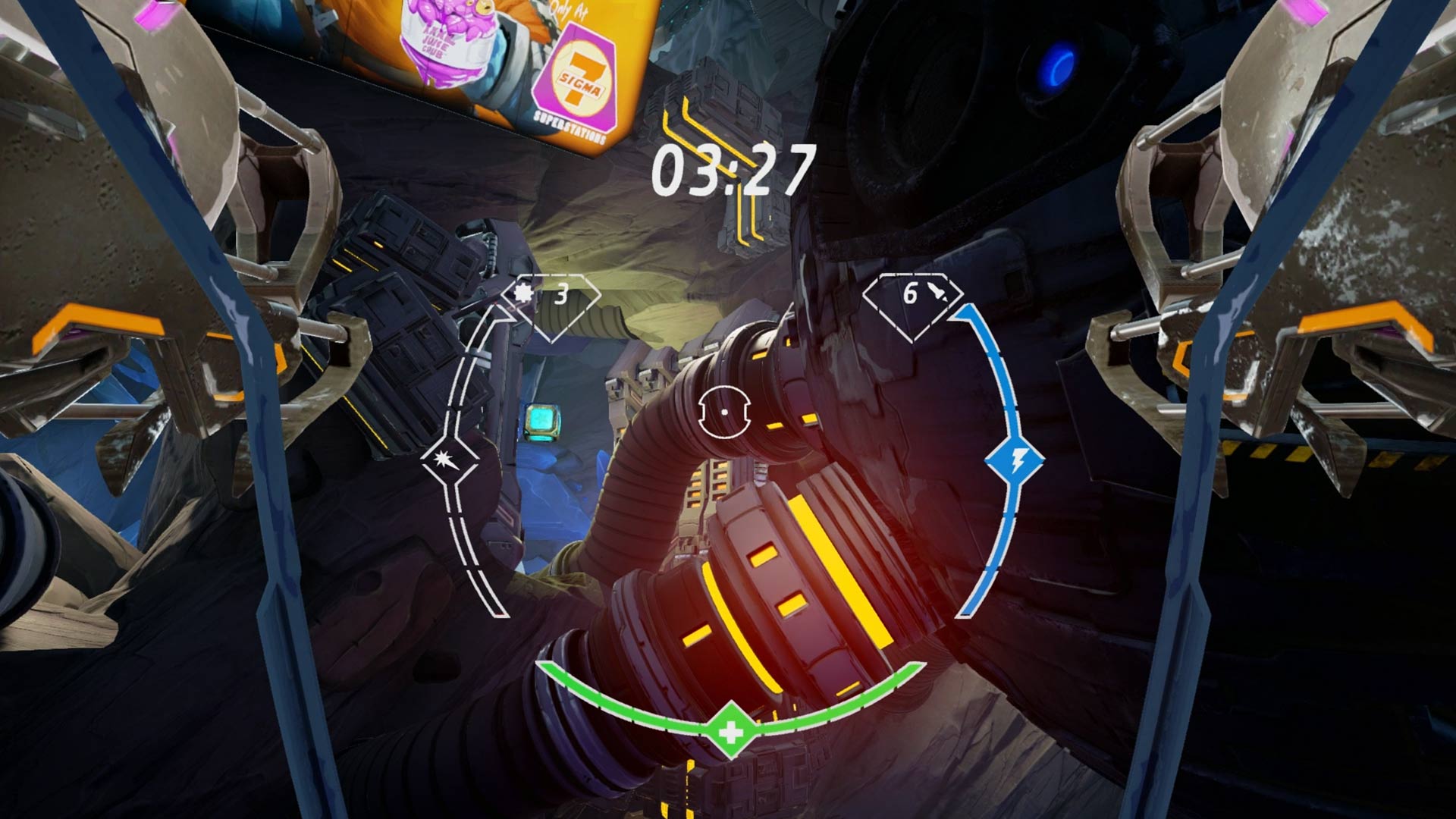 Where StarBlood Arena does boast a surprising amount of depth however, is in the class-based system that exists. With a selection of characters to choose from, and each with their own strengths and weaknesses which in turn can be augmented by gear upgrades, StarBlood Arena boasts a fair amount of creative latitude for the player to engineer their own playstyle and combine that with other players on their team. It’s no Overwatch certainly, but such depth is arguably welcome all the same.


Unfortunately when it comes to the visuals, StarBlood Arena isn’t much to write home about. With the best reserved for its tutorial and menu screens where decent visuals have been brought to bear on StarBlood’s wise-cracking robot/alien show host duo, the actual game itself looks like a early generation PS3 title, with low detail textures, poor effects and a general lack of ocular bombast that makes you question just how much of the PS4’s grunt is being used here.


An intriguing six degrees of freedom shooter, StarBlood Arena has its share of moments while a decent, if traditionally crafted progression system makes a fair attempt at securing the attention of the player for a longer term.


Unfortunately, severe motion sickness, overly fiddly controls, constrictive play areas and simplistic visuals will do little to appeal to players who have already been spoiled with RIGS and Battlezone VR’s more refined thrills.

Though the premise is intriguing, and the game does have its moments from time to time, StarBlood Arena isn’t quite in the same league as PSVR’s launch effort, RIGS.