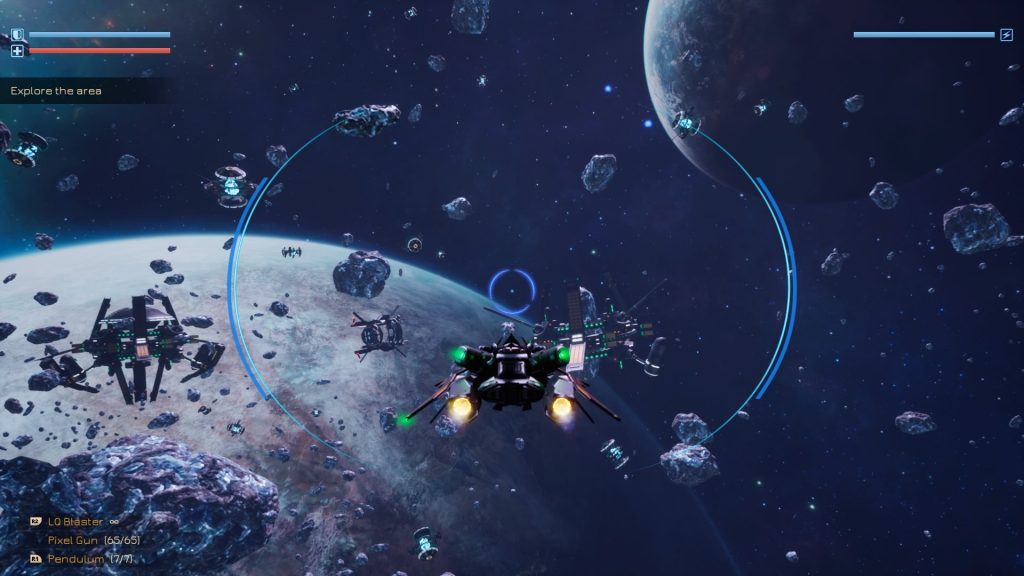 Imagine a journey into space…accompanied only by your mother. Would those long cosmic nights just fly by, or would the claustrophobic maternal nurturing drive you to the very edge of insanity inside your celestial prison? Unfortunately, your mother is not on board for the duration of this space shooter, but would it possibly be more enjoyable if she were?

Subdivision Infinity DX has graduated from its mobile origins onto the consoles, the main visible legacies being the simplistic but charming storytelling style and bite-sized pick-up and play mission levels. Otherwise, this appears to be a fully-fledged console reboot at a budget price, which has scrubbed-up pretty nicely.

After booting up and starting the story (no multiplayer alas), your Ryan Gosling lookalike, Rebel 1, is coaxed by his robot buddy to investigate some dark and potentially dangerous happenings at an outpost. The preliminary briefings are presented in a rudimentary way, with no voice acting and static images with speech bubbles appearing in turn. This is fine, as the generic nature of the story borders on ironic, so it’s hardly essential in order to enjoy the action that follows.

Your basic ship has two weapons, which can be upgraded as you progress through each level, earning credits and the necessary ingredients to ‘evolve’ your ship, craft a new one, or simply purchase better ones in the ‘hangar,’ which bookends each level. New weapons, scanners, and mining tools can also be bought, the latter for the ten bonus ‘exploration’ missions where your primary focus is to search for precious stones and upgrades for crafting new ships.

Darling, I need some space

Out in space, your agile but sluggish ship spends most of its time shooting down small fry enemies in groups of three or five, with left shoulder buttons controlling thrust and right shoulder buttons firing both weapons. Strangely, the ‘roll’ controls are mapped to the D-Pad, which never felt instinctive. Unfortunately, the controls can’t be remapped either.

Most of the 25 levels involve some brief reconnaissance followed by a fair amount of shooting, with the small ships easily dispatched and anything larger requiring more stealth and patience. Space mines are abundant on later levels, so you’ll need to keep an eye out for those as well as the enemy ships. Longer levels are broken up with dialogue, which progresses the plot and helps to explain your next target. However, checkpoints are strangely absent, meaning your death results in a lot of retreading of the same mission which can become tedious.

After four increasingly demanding levels on each of the five main missions, you’ll come to the ‘boss’ level. Ideally by then, you will have kitted your ship out with enough firepower to save you from enduring a long and drawn out battle as you pick off the mothership’s energy bar.

The gameplay is generally quite simplistic compared to other space games like Everspace or No Man’s Sky, but Subdivision Infinity DX succeeds on its own terms as a stylish, shallow, but fun space blaster that becomes quite challenging towards the end.

Featuring zero loading times, the presentation is impressive with a great sense of scale and excellent detail and lighting effects. Aside from the strange ‘lock and load’ weapon sound, which sounds like a redneck readying his shotgun in his car-hole, the SFX do a decent job of reinforcing the visuals.

Colony Warts (and all)

Overall, there are some fun times to be had here, providing your expectations are kept relatively low and you are happy blasting increasingly large spacecraft with large weapons for the three or four hours it takes to complete the main missions. There’s a fair amount of repetition with very little replay value, and you really won’t give a hoot about the story line. For the price, it’s hard not to recommend the game if you have a penchant for shooting spaceships.

It’s just a shame there aren’t any multiplayer options – either a ‘last man standing’ 8-player battle or even just some challenge leaderboards would have sufficed. Unfortunately once you’ve whipped through the single-player game, you aren’t likely to load this game up again.

Subdivision Infinity DX is out now on PS4.

A shallow but stylish and challenging single-player space blaster, which despite the forgettable storyline, offers a good few hours of alien ass-kicking at a budget price.