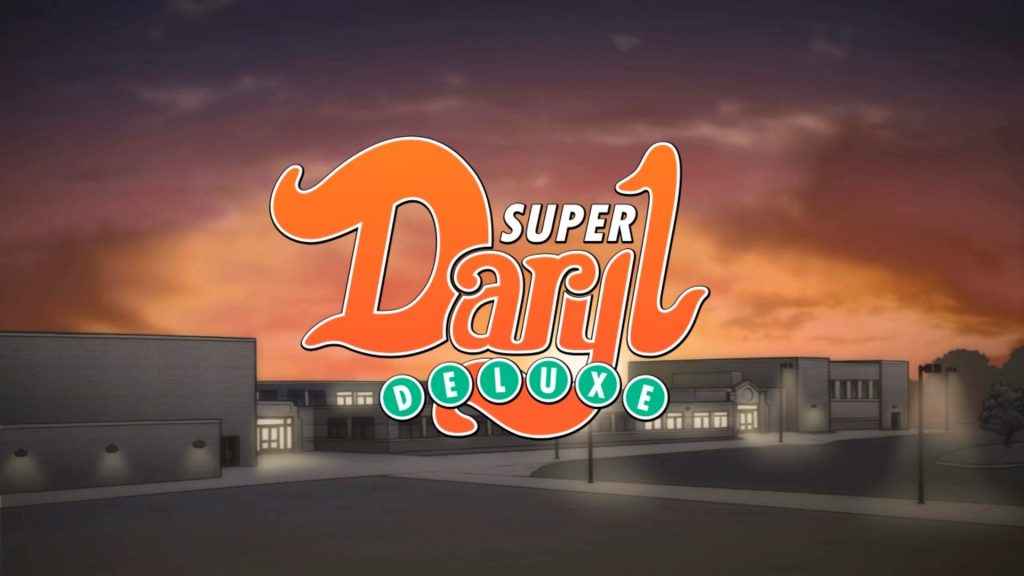 The first outing by new developers Dan and Gary Games, Super Daryl Deluxe is a smorgasbord of wacky adventures, strange and comical enemies, and a storyline bordering on the brink of insanity.

Like many other great indies before it, a plethora of hilarious characters, unique situations, and colorful locales await you in this sordid and death-defying tale. You take on the role of Daryl, a mouth-breather with a mullet and orange bell bottoms.

Unremarkable in every way, this unassuming teenager has just transferred to Water Falls Highschool, the very same school that graduated two individuals that brought about world peace.

The game takes place years after world peace has indeed failed, and odd happenings, such as student and faculty disappearances, classroom lockdowns, and mysterious inter-dimensional portals have appeared in WFHS.

As Daryl, and during the week of World Wake Up Day, you will uncover the mystery behind this 40 year old tragedy, and just may get to be the hero and save the girl in the end. That One Time I Took Acid in High School

To say that Super Daryl Deluxe is a “trippy” game would be the most severe of understatements.

It is wild. It is wacky. It’s honestly like a mind bending journey through every Highschool class if you had overdosed on hallucinogens just enough to function but have your imagination set to overdrive.

I experienced music, art, and history as only a video game could deliver, bending the fabric of reality and presenting history’s greatest figures interacting with each other in over-the-top scenarios, presented in what I can only describe as full-throttle farcical story-telling. I repaid a debt from Leonardo Da Vinci to an alcoholic Beethoven. I assisted Julius Caesar, Genghis Khan, and Napoleon in a joint tactical raid on evil forces. I fought a world champion heavyweight boxing caveman in a janitor’s closet. I have never had more fun while not actually being on drugs since I saw Half-Baked for the 10th time.

Nearly every line of dialogue, expertly written and delivered, had me laughing. Every character has their own goofy personality, from a bear that can only be understood by one other student, to a group of Dwarves & Druids players that teach you about how your questing, combat, and journals work, to the mysterious Honor Roll Students and their diabolical evil scheme which only Daryl for some reason can stop.

The entire game you’ll be left wondering if this is actually happening, or if it really is just the overactive imagination of a bored highschool student. The story plays perfectly into how the game operates. As a Metroidvania style RPG, you will explore the school and its various classrooms, quad, and ventilation systems and alternate dimensions.

Through some new friends that gladly hire you as their errand boy, you acquire the last remaining copy of the book that changed the world. Each page teaches you a special skill, that you can assign to one of five buttons to use during combat. This system seems a little odd at first, as it feels very MMOish with each skill having a cooldown after being used. This means careful planning and timing is essential to build combos properly upon each other.

The beauty of this system will make itself apparent after you have collected more pages and have access to more skills, as it allows you to completely customize your combos to your playstyle.

I myself was fond of the skills with a shorter cooldown time but dealt less damage, as this allowed me to rapidly combo enemies. You acquire new skills by finding or buying textbooks (a rare commodity in this school) and then using EXP to level them up, increasing their damage or shortening their cooldown time.

Enemies will typically attack you anytime you make your first venture through a new area, but on subsequent visits you can usually run by them without fighting. Only certain areas will have enemies that will attack everytime.

With just a little extra work, it is easy enough to level up and buy better equipment without taking away the fun of challenging enemies and epic boss fights later in the game. Be aware though, there is no autosaving in the game, so you must manually save from one of the many restrooms located throughout the highschool, which are often just outhouses leading to an alternate bathroom dimension.

There is also enough puzzley goodness and exploration to keep you busy for hours, finding new items and gaining new abilities to access old areas later in the game. It never gets old and allows you to proceed through the story at your own pace like any expertly crafted RPGVania game should. Super Daryl Deluxe is an experience worth every penny. Dan and Gary Games have expertly crafted an engaging world filled to the brim with deep characters, parody upon glorious parody of pop-culture references, both new and old, and all the while never forcing the game to take itself too seriously.

You go in knowing you are in for a wild and goofy ride, and will come out with a new appreciation for the human experience, and an ability to laugh at life and Death itself. The artstyle and animation is simple but extremely well done, and the music as absolutely fantastic. The custom soundtrack is both chill and upbeat, often singing about Daryl himself as he explores the offbeat world he finds himself in.

If you are in the mood for a new sidescrolling Metroidvania beat-em up, with a story that will bring a smile to your face, don’t miss out on this epic journey.

I cannot overstate the hilarity in this game. The combat is fun, if a bit tedious at times, but it never drops the ball on consistently delivering humor in oddball situations, built around a cast of lovable characters. With a little luck, you just might learn something you were never taught in highscool.