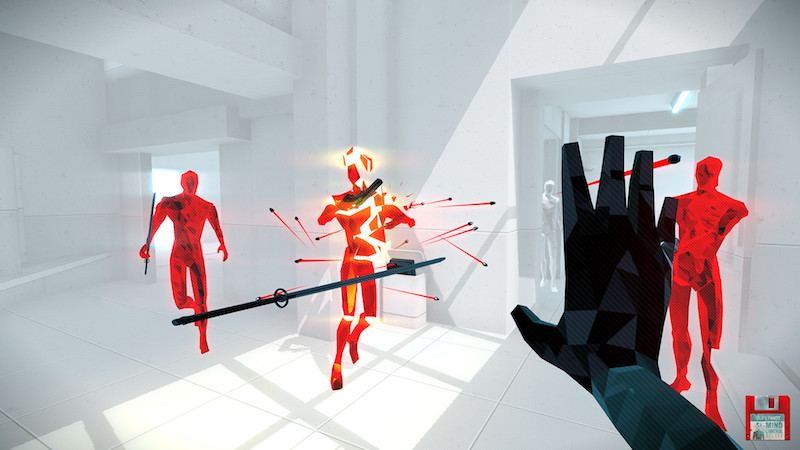 Superhot: Mind Control Delete PS4 Review – A previously unheard of hybrid of first person shooter gameplay and puzzle solving anchored by a innovative time mechanic, it’s fair to say that when Superhot was released on the PS4 back in July 2017, there was nothing quite like it. Fast forward three years and Superhot: Mind Control Delete, a new standalone entry in the series is now in our hands and while it’s not a full sequel, it nonetheless enacts enough significant changes to the formula to make it a supremely worthwhile prospect.

For those not familiar with Superhot’s esoteric charm, the core tenet is this – as a individual trapped within a VR simulation, you must murder your way through a series of red-hued foes in order to progress from level to another with a view to eventually escaping your digital prison. Where things get funky however, is in the fact that time only moves when you do and it’s this central mechanic which has lent Superhot much of its enduring appeal.

Beyond the time manipulation mechanic, Superhot’s levels were also something of a violence sandbox. Sure enough, while the main objective never changes, how you go about accomplishing the destruction of your enemies in entirely up to you. Whether that’s you flinging an ashtray into the face of an onrushing foe before taking their gun, shooting them in the head and then flinging the gun into the gut of another before uppercutting their head clean off, the sheer scope and creative latitude for violent innovation was both substantial and ruthlessly compelling.

Whereas the first Superhot (and also by proxy the superb Superhot VR), felt much more like puzzle solving endeavours whereupon each level felt like a specific situation with only a limited number of permitted methods to solve them, Superhot: Mind Control Delete instead feels much more like a freeform first-person shooter by comparison.

In previous Superhot games each level felt bespoke and unique thanks to the individualised map design, but in Superhot: Mind Control Delete the maps find themselves randomised and recycled, resulting in the player encountering the same maps over and over. The lack of individuality that each level possesses in Superhot: Mind Control Delete is also underscored by the structure of those levels, where enemies keep on piling towards you until you kill enough of them to get through the level.

Personally, I see this as something of a step back design wise, not least because I felt that Superhot was at its best when it functioned as a thoughtful (if admittedly much more linear) puzzle solving affair, rather than a much more freeform shooter. That said, I can also see why others might think the opposite too – the shift towards a much more freeform and non-linear framework is certainly appealing and makes the difficulty curve much more skewed based on your reaction time and skill, than your puzzle solving capabilities, allowing Superhot to appeal to an almost entirely different audience in the process.

Developer SUPERHOT Team have also built in a number of new tweaks and additions to the base concept to keep this new approach interesting too. Enemies in later levels now come at you with weapons that cannot be disarmed from them, while some foes will have specific weak spots that must be hit in order to vanquish them and others will shatter into a shower of ricocheting bullets when killed.

Combined with a steeper late game difficulty curve underlined by some super fiendish enemy placement, Superhot: Mind Control Delete certainly becomes something of a staunchly challenging prospect that newcomers would do well to duly mitigate by playing the earlier Superhot games first.

Beyond the perhaps controversial shift to a much more non-linear, shooter design bedrock, Superhot: Mind Control Delete also brings some other, more transformative changes to the core formula, and chief among these is shift towards something resembling a roguelike shooter. Part of this approach is the notion of skills and core abilities that’s entirely new to the Superhot series.

Here, players can swap out various core abilities which are used throughout the game, such as extra health or the ability to rush towards a foe and punch their skulls off their shoulders. Further developing the roguelike design within the game is that between each level additional temporary skills such as bullets that penetrate multiple enemies, or beginning with a firearm, can also be chosen, allowing players to really customise their build in a way that just wasn’t possible in the previous games.

Away from the core moment-to-moment shooter gameplay, Superhot: Mind Control Delete also leans a little deeper into the psychological horror, existential and meta themes that were touched upon in the previous games, helping to ensure that the whole experience is grounded in something a little more solid story-wise. It works for the most part too – inflicting a level of dread, foreboding and helplessness that feels utterly appropriate to the setting.

When the player is in full flow, there is still nothing quite like Superhot. In Superhot: Mind Control Delete, while each level feels less like a conundrum that must be solved and more like a pressure cooker FPS dictated by a ballet of violence, SUPERHOT Team have nonetheless meaningfully iterated upon the original experience in surprising and compelling ways. At roughly four times the size of the first Superhot, if you’ve craved more of one of the most innovative shooters ever made, Superhot: Mind Control Delete has your back.

Superhot: Mind Control Delete releases for PS4 on July 16, 2020. It is free to anyone who owns Superhot.

Superhot: Mind Control Delete represents an innovative and meaningfully iterative take on the Superhot formula, swapping out some of its more cerebral design for a much larger, roguelike effort that proves once again that the series is one of the most innovative shooters on the market today.