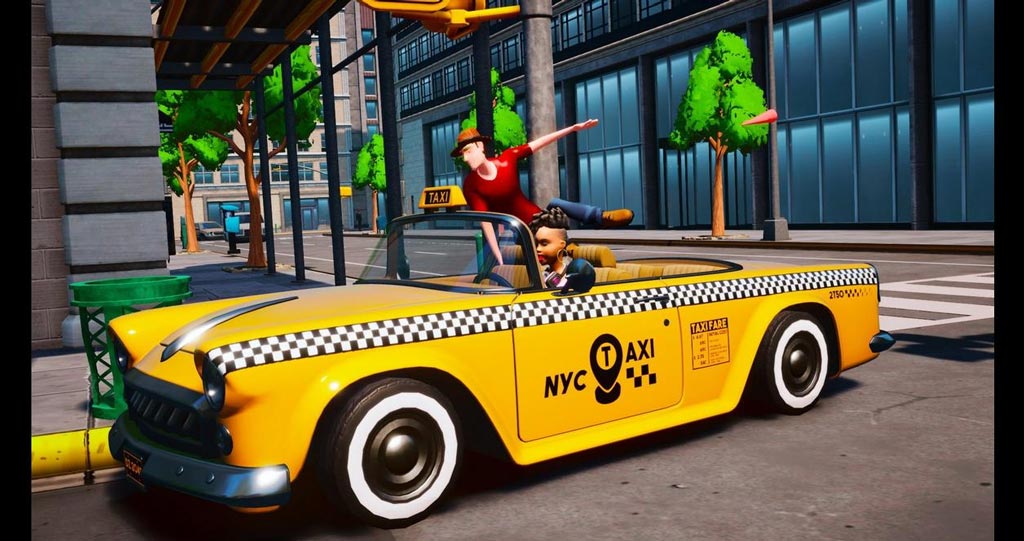 Taxi Chaos PS4 Review. Film and game remakes can be pointless affairs which are a waste of everyone’s time, and display a surfeit of original thought in the pursuit of easy financial gain. Four of the most egregious include Gus van Sant’s shot by shot remake of Psycho, Tim Burton’s soulless Charlie and the Chocolate Factory, Joss Stone’s note perfect a cappella remake of Trout Mask Replica, and now Taxi Chaos, a Crazy Taxi clone which actually removes key elements from a classic arcade game already available on PS Now.

I was really looking forward to this spiritual successor to the original Crazy Taxi, as the SEGA arcade classic combined a gloriously bright and sunny aesthetic with an instantly playable original concept. Like many arcade games, there was precious little in the way of depth or much more to see after the first ten minutes of play but playing it as intended in short bursts, it succeeded.

For the uninitiated, you drive a taxi around a sun drenched American city, picking up customers at the roadside and ferrying them to their destination in order to add time to the game clock and to rack up scores and combos. Higher scoring customers are denominated by their colours and their destinations are further away or more difficult to reach, so if the time is about to run out, you’re best sticking to the green customers.

In theory, an up to date remake seems like a good idea, with the opportunity to combine the original fun but shallow arcade experience with the depth of city driving antics found in more modern games such as Grand Theft Auto V, Burnout Paradise, Driver San Francisco and The Crew. Local and online multiplayer seems like a shoe-in, as even without too much in the way of new additions to the basic formula, the inclusion of a competitive element against something other than the timer would add a huge amount of replay value. 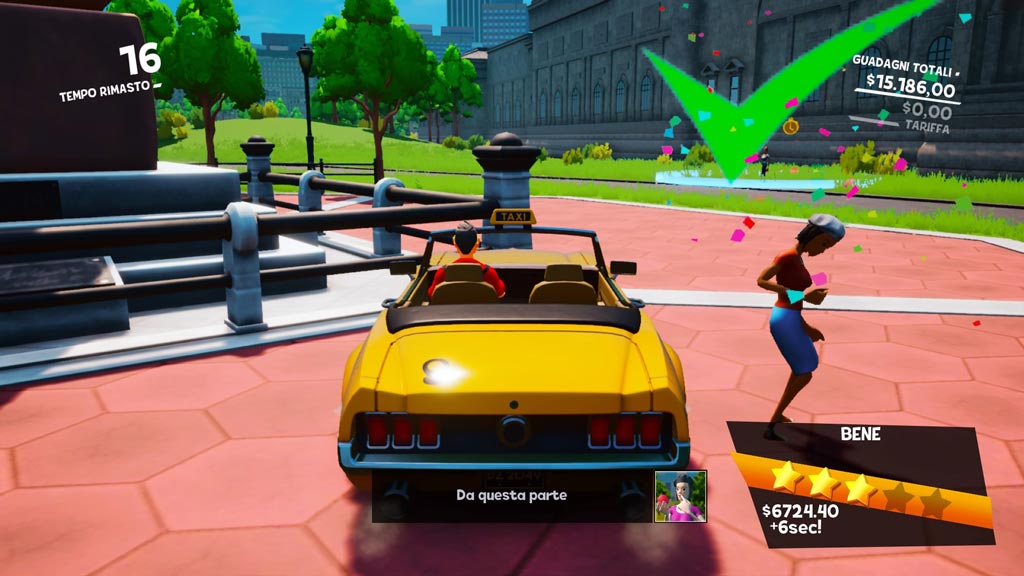 From the off, Taxi Chaos seems content with no such improvements, with menu options, character design and gameplay pretty much identical to a game which is now 22 years old. Granted the graphics are a bit more polished, but the dated gameplay hasn’t been touched and the opportunity to populate a more expansive city with more people, vehicles and stunts has been ignored in favour of a shockingly uninspired remake.

‘New Yellow City’ is a pint-sized replica of New York, so it’s pretty much flat and Team6 Studios have thus removed a key element of Crazy Taxi which made the repetitive driving that much more compelling; namely the rolling hills that so well defined that SEGA arcade original. They’ve chucked in a small area with jumps down by the harbour, all of which offer nothing in the way of thrills or rewards for attempting to use them, particularly when they’ve added a jump button which launches you far higher at random.

The city also appears to me mirroring the current pandemic, in that it seems like most of the population are sat at home and you’ll often be driving down empty streets – hardly the busy metropolis featured in the SEGA classic. 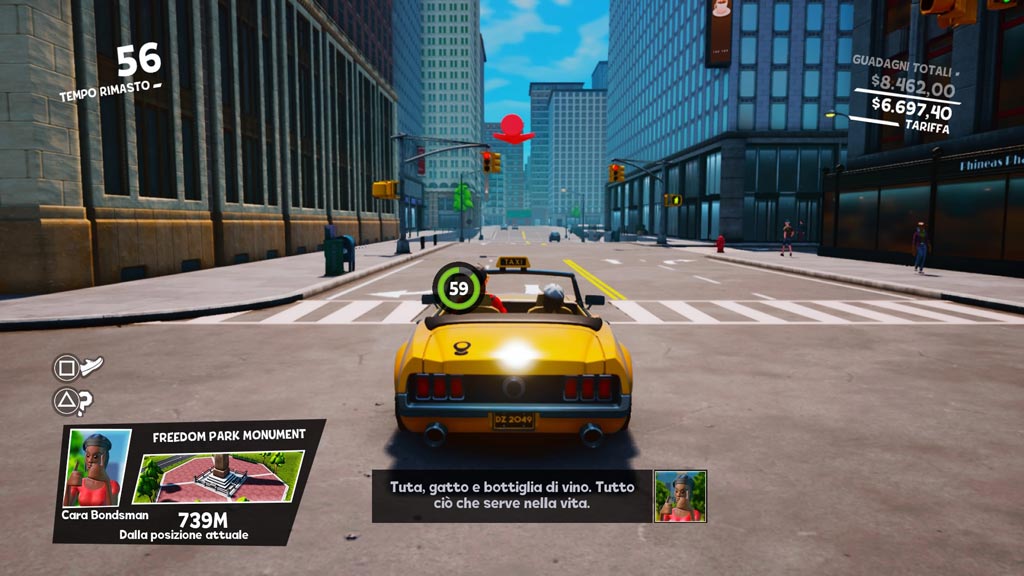 The only original control additions are the ability to charge up a boost of acceleration from a standing start, and the aforementioned and ludicrous jump which enables you to launch yourself skyward over other vehicles and to reach roof short cuts through the city. Both of these are virtually pointless and seldom used during normal play. At least the overly twitchy driving controls in Crazy Taxi have been replaced for something which feels fractionally more realistic and responsive, although a drift option seemed like another obvious addition which isn’t present.

An unlockable ‘Pro’ option enables you to play the game without direction indicators, but the city is so bland and unmemorable, you’re unlikely to ever memorise it well enough to make this mode enjoyable. Similarly pointless is the ‘Free roam’ option which removes the timer, and therefore the only element of the game which is motivates you to continue playing, as driving around a city which is severely lacking in character just isn’t compelling enough to make you want to explore. 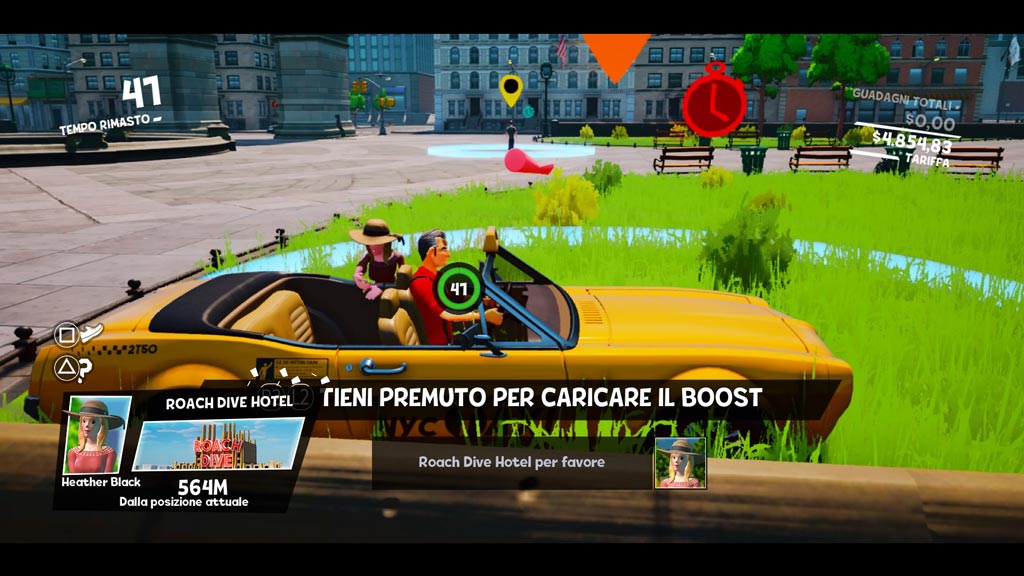 Graphically, the game manages to be as colourful and bright as the original, and your taxis are nicely rendered but the city, its inhabitants and the other vehicles are so basic, I get the impression that either the developers couldn’t be bothered to improve these elements or it’s supposed to be ‘retro’ but more likely the former.

The soundtrack is functional and uninspiring and the customer conversations manage to become irritating and repetitive within five minutes of play. I ended up switching to Italian text just to give myself a bit of practice with some verbs and nouns while I tried to stave off the boredom and my incredulity at how half-arsed the production values were. 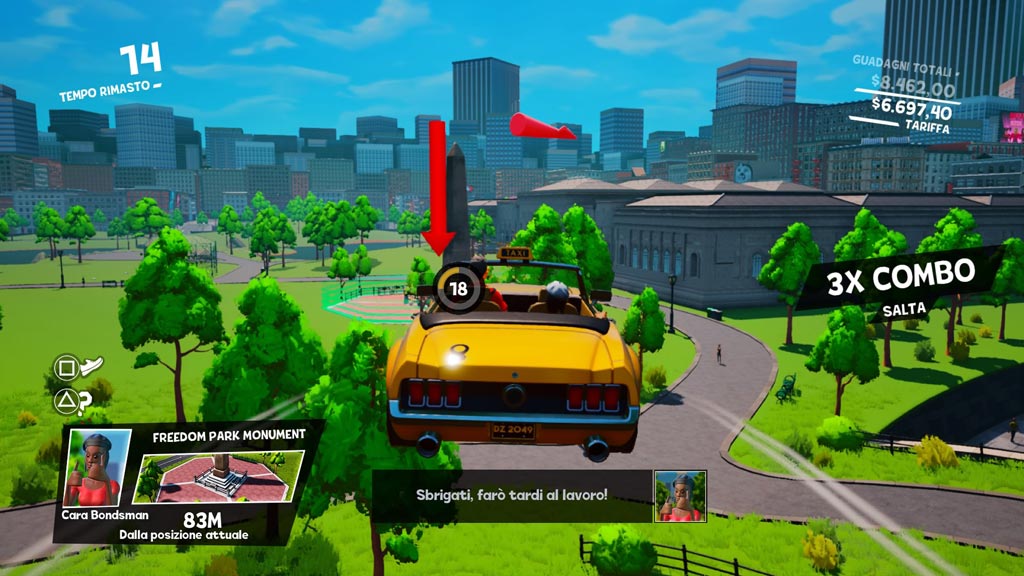 Patch In A New Game

Unless the developers patch in some new cities, improved graphics, a multiplayer option and some originality, it’s pretty much essential that any fans of Crazy Taxi give this uninspired rip-off a wide berth. The missed opportunity of failing to add a whole bunch of fun and depth to an ageing arcade game whilst simultaneously removing elements which made it enjoyable in the first place is egregious to say the least.

I can’t fathom why Team6 Studios felt the urge to make this at all when I’m the sure the people involved could have spent their time far better creating something original and fun, rather than a totally uninspired remake. If you want to be reminded of the joys and also the lack of depth of Crazy Taxi, play it for half an hour on PS Now or your mobile and don’t waste your money on this.

Taxi Chaos is out now on PS4.

An utterly pointless spiritual successor to Crazy Taxi which adds nothing new to an ageing arcade game and somehow manages to remove what made the original so playable in the first place. A missed opportunity to improve or update the gameplay renders this instantly moribund.