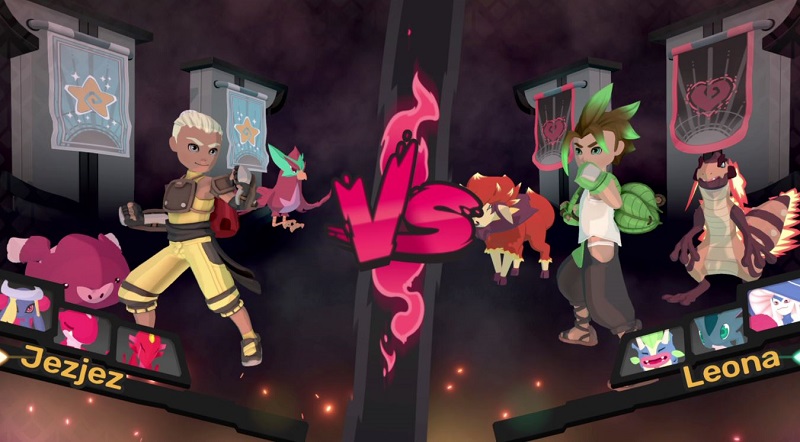 Temtem Early Access PS5 Review. For a good while now it’s fair to say that PlayStation gamers of a certain vintage (and perhaps even outside of those parameters) have looked upon Nintendo’s Pokemon franchise with envious eyes. And they’d be right to, as Nintendo’s erstwhile money earner has managed to nail a combination of bright and colorful characters, addictive RPG trappings and the sort of playground style play and trade mentality that nobody had ever really seen before in the industry.

Well now PlayStation 5 owners can get in on the action on with Temtem, a long in development offering that you could generously say has been wholly inspired by Nintendo’s juggernaut, monster battling IP. However, much like the various monsters that form the core of its collect and battle design sensibilities, Temtem’s PlayStation 5 early access debut none too subtly hints at the greatness that the Crema developed effort will eventually evolve into.

After you’ve created your very own twee looking character from a range of colorful body parts and clothes you’re then whisked off to the starting village of Zadar where you begin your life as a rookie Temtem tamer (not trainer). Viewed from the same slanted, top-down three dimensional perspective that Nintendo has leveraged in its latest Pokemon titles for Nintendo Switch, wannabe Temtem tamers can wander around the six islands of the Airborne Archipelago, speaking to NPCs, discovering secrets, taming Temtem and, of course, battling them too.

Despite being in early access Temtem certainly looks the part with a color and charm steeped visual presentation that takes in all manner of clear blue rivers, sandy beaches, richly green jungles that are bursting with vegetation and much more besides. With its bright, colorful and bouncy anime style characters and presentation Temtem not only does a grand job of emulating the look of the Pokemon games but adds a level of technical sheen that Nintendo’s own hardware would struggle to match.

Indeed, Temtem is no slouch technically speaking either, with detailed environments, charming looking characters and a mostly rock solid 60 frames per second screen update that is only compromised just after battles when the game world is brought back into focus. In short, even though it’s an early access game, Temtem is already looking highly polished and can certainly be compared to many full releases in this regard even at this relatively early juncture.

While the environments in Temtem are certainly easy on the eye, there sadly really isn’t a whole lot to do in them. Sure, you can talk to various NPCs, vendors, collect items and so forth, but the interiors of the many buildings you can enter don’t have any real points of interaction and serve only to house the NPCs and so on that are supposed to be there. A shame.

Then there is the traversal gating. Despite your plucky tamer being able to run about the place like an Olympic sprinter and battle Temtem, they cannot seemingly see their way to stepping over a wall that comes up to their knees (though they can quite happily step off said wall when coming from the other direction). As such, exploration in Temtem at this early point at least doesn’t feel quite as engaging as it otherwise should in such a beautiful world rife with all manner of flora and fauna.

Once you get into the nitty gritty of Temtem’s offering, a familiar beast soon reveals itself. To say that Temtem follows a comparable rhythm to its classical inspiration would be something of an understatement. To this end, anyone who has played even the earlier Pokemon games will recognize what developer Crema has wrought here. Essentially, you wander around the environment, using TemCards to capture Temtem once they have been weakened in battle and then redeploy those Temtem in battles against other Temtem tamers, advancing the story as you go.

Naturally once the battles kick off Temtem becomes even more familiar, albeit warmly so. Battles unfold in a three-dimensional arena space that resembles the part of the world in which the battle was joined. Once started, Temtem’s turn-based combat unfurls duly, allowing players to take control of each Temtem in turn, using abilities which consume precious action points against enemy Temtem, employing supporting items and more besides in order to keep the battle going in a favorable direction.

Much like Pokemon, Temtem also embraces the same sort of tactical, strength/weakness based mechanics that have made Nintendo’s money-gobbling franchise so popular over the years, where each Temtem has strengths and weaknesses against different elements and types of attack that can be exploited for maximum effect during battle. To aid players in this, the Tempedia is effectively Temtem’s version of the Pokedex – a comprehensive digest of all the Temtem that you’ve encountered on your journey that chronicles their strengths, weaknesses and bespoke quirks.

The battles themselves can actually be pretty dynamic too outside of the usual armchair general strategizing you’re expected to employ. Helping to keep things fresh, you can not only find yourself fighting tamers that boast a variety of Temtem, but you can also end up fighting multiple trainers at once too, each boasting their own tactics and special attacks.

Where things can get a little annoying in Temtem, is in the number of ‘ambush’ battles that can occur during the game. Essentially Temtem’s equivalent of random battles, you can have a random tamer rush up to you (thankfully level tuned to the area that they exist in) much too often, essentially draining you off previous Balm to heal your Temtem in battle after battle. Hopefully, this is one area of the game that is tamed, if you’ll excuse the pun, in a future update.

Beyond all the capturing and battling that arguably serves as the center of Temtem’s offering, there’s also a fair amount of JRPG style fetch and battle side quests to be done too in a bid to keep things refreshing. These side quests work well in this way too, as they not only provide you with an additional items and experience as a loot incentive but they also help along your exploration of the six islands encompassed by the Airborne Archipelago, too.

Where Temtem seeks to separate itself from its classic inspiration however, is in the persistent online nature of the game which through the miracle of crossplay, allows PlayStation 5 Temtem to not only join in and play with and against PC players, but also Xbox Series X folks too. And here’s the thing, with a larger pool of players afforded by crossplay, there’s always someone to pit your Temtem against or another player to bring along with you in co-op to tackle the main story.

Encouragingly, Temtem developer developer Crema looks set to continue bringing new features to the game over the coming weeks, months and even years as players can enjoy customizing their own house, taking on new quests and of course taming new Temtem. As something of a cheeky, but extremely well executed nod to one of the giants of the industry, Temtem’s early access foray on PlayStation 5 is a resoundingly successful debut for the monster catch battling RPG genre on Sony’s shiny new lump of gaming silicon.

Already highly polished and nailing the essence of the monster catch battler RPG subgenre, Temtem looks set to go from strength to strength on PlayStation 5 if the surprisingly robust state of its early access debut is any indication.