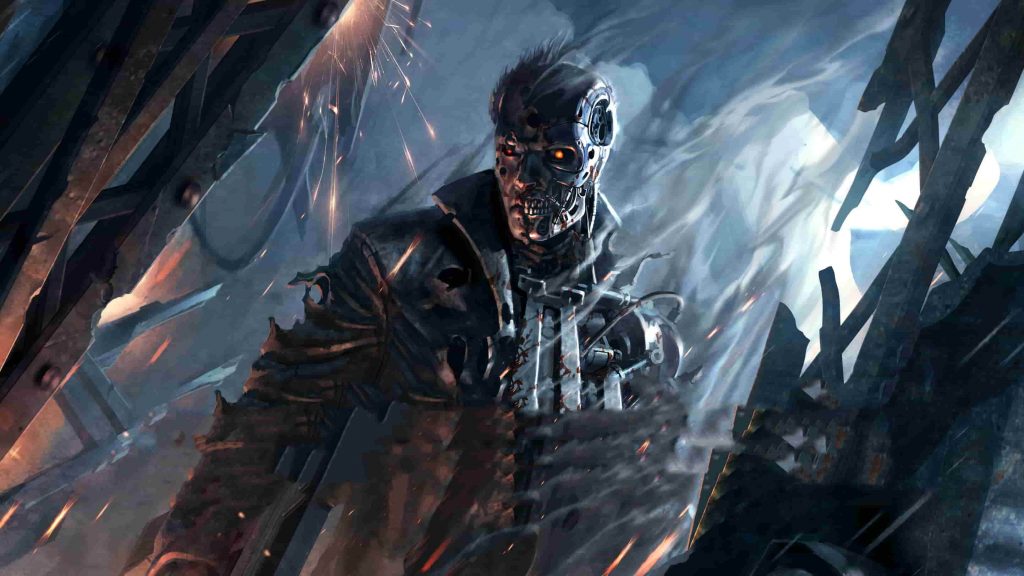 It has been an age since the last Terminator game landed on a PlayStation console, and even longer still since the least great one arrived (spoiler – there has never been a great Terminator game for a PlayStation console). So it is then that Terminator: Resistance was approached with some degree of trepidation – a feeling that is exacerbated by the fact that developer of the game, Teyon, brought us the risible Rambo game for PS3, which was, well, truly terrible.

Imagine my surprise then, to discover that as a first-person shooter, Terminator: Resistance actually acquits itself as a fairly decent take on the license, albeit one that veers quite deeply into ‘guilty pleasure’ territory at times.

Developer Teyon Has Nailed The Atmosphere Of The Terminator Universe

From the start, Teyon wastes no time in tapping into those nostalgic Terminator feels with a title screen soundtrack that features an ear-strokingly guitar heavy mix of the score that was heard in the 1984 original movie. Likewise, Teyon ram the point of authenticity home in the game’s opening moments; a frenzied escape from a Skynet ambush that takes in a throughly ruined, post apocalyptic California, a place of burning car chassis, rough brush, rocky outcroppings and of course, that iconic Terminator laser blast sound. Terminator: Resistance looks and sounds the part then, and as first impressions go, you could certainly do worse.

As Jacob Rivers, a wayward member of the Pacific arm of the human Resistance that Skynet has marked for termination, Terminator: Resistance has you wandering the Californian wasteland as you help out the motley band of humans that have saved you from a dark fate (sorry). More than just storyline dressing, the folks that help you along in your journey to discover why Skynet hates you so very much can actually be talked to, offering up a whole bunch of non-linear dialogue for you to get stuck into as numerous side plots unfurl alongside the main narrative.

Terminator: Resistance Is A Little More Sophisticated Than You Might Think

Again, surprises abound here, not least because I didn’t expect a Terminator game from the folks who brought us the on-rails Rambo shooter to offer up non-linear dialogue, and yet, here we are. The multiple choice mechanism of Terminator Resistance’s conversations have a point too, as some characters will offer you side missions, whilst the decisions you make in some conversations, can actually affect the narrative and the end of the game, resulting in a different endings. Once again, it’s a surprising amount of depth from what I previously assumed might have been a throwaway type affair.

The availability of side quests should also tip you off to something else; Terminator: Resistance is a fairly open, non-linear shooter that has more in common with the likes of Far Cry and Deus Ex than it does any other title, presenting a semi-open world that permits players to tackle objectives in any order they fit, in addition to leveraging the various ventilation tunnels, destroyable walls and more as handy shortcuts. Additionally, various notes and diaries left behind from folks both before and during the apocalypse provide a nice bit of lore, while some neatly hidden easter eggs will delight fans of the first two movies for those willing to explore.

Sure, we’re not talking Far Cry 5 levels of open world scope here, but what is present certainly helps to make Terminator: Resistance feel like a much more meaty offering than it otherwise would.

Fattening out the game somewhat further is the crafting system that Terminator: Resistance employs. Here, Jacob can fashion all manner of ammunition, medical supplies, explosives, chemical boosters and more from materials scavenged from both the ruined husks of former cityscapes but also from his fallen machine enemies, as well. Again, it’s nothing especially groundbreaking, and certainly not as deep as crafting systems seen in other games, but it does add yet another level of sophistication to a game that many will assume has none.

Progression too, is very much a thing in Terminator: Resistance, though it is, by turns, very basic. You have a number of skill categories, survival, combat and so on into which a number of different skull trees exist, allowing you to invest precious skill points that you receive for gaining a level (with XP earned from completing missions, destroying enemies and completing tasks), or from the skill books that you can occasionally find lying around the place. Elsewhere, Plasma weapons can be augmented with chips salvaged from destroyed machines, resulting in higher damage, fire rate and so on, but it’s nothing to get too excited about, quite honestly.

And so we come to the combat side of things, and it’s here that Terminator: Resistance is something of a mixed offering. For a start the guns all sound convincingly meaty and feel great to use – whether it’s the throaty rattle of the assault rifle, the thundering boom of the Remington shotgun (the lack of a swing reload mechanism has been duly noted) or the iconic zapping sound of the Skynet plasma cannons, unleashing your arsenal in Terminator: Resistance proves to be hugely satisfying.

The enemies that you’ll fight early on are a mixture of airborne robot scouts, giant android insects and massive spider robots that have miniguns for arms – hardly inventive, but sticking with the mythos nonetheless. Luckily, the array of traditional weapons that you’ll have access to early on, such as pistols, shotguns and assault rifles are all up to the task of destroying these foes with relative ease. What they can’t kill, or even damage however, are the Terminators themselves.

As is befitting the stuff of James Cameron’s nightmares, the Terminators are an unstoppable force in the early part of the game and must instead be evaded, or, destroyed by hacking a Skynet plasma turret to get the job done. Indeed, it’s in this early part of the game that evasion is of the essence and a handy detection indicator tells you how close you are to being spotted – it’s pretty much stealth 101 quite honestly.

The main drawback to the combat in Terminator: Resistance is that the enemies are, for the most part, absolutely dumb as rocks. Sure, I get the fact they are machines and do not feel threatened by the humans (to an extent), but just having the various T-800s and so forth slowly stalk towards you later on in the game as you destroy them one by one with a Skynet plasma rifle feels a touch underwhelming to say the least.

Terminator: Resistance Might Be This Year’s Best Guilty Pleasure

If you wanted to be especially cruel to Terminator: Resistance you might say that it’s a discount hybrid of Fallout and Far Cry, with a Terminator veneer just stuck on top – and you wouldn’t be completely wrong. However it’s really in the atmosphere and the audiovisual presentation that the game soars the farthest, with a beautifully grim depiction of the Californian wasteland in which rebar impaled cars sit atop some kind of pyre and where abandoned shops provide glimpses of the world that existed before.

And again, the music is timed perfectly – chiming in with that iconic, portentous riff whenever a Terminator is close by and otherwise sticking closely to riffs from Brad Fiedel’s superbly melancholic score in the very first Terminator movie in other parts of the game.

Now of course, given the reduced budget that Teyon had to work with, Terminator: Resistance certainly creaks in a few places. The framerate takes a very seldom steep dive in some areas on PS4 Pro (though the option does exist to switch between an unlocked framerate and a solid 30 FPS), while occasionally some of the larger character models get stuck in the environment, and so on.

Quite unlike the first two movies then, Terminator Resistance hardly seems set to set the world on fire. Nonetheless, what we do have here is a well made, solidly enjoyable and atmospheric Terminator title that does justice to the license – and that’s more, much more, than I would have expected from a licensed game like this which pretty much just dropped out of the blue a little over two months ago.

Terminator: Resistance releases for PS4, Xbox One and PC in November 15, 2019 in Europe and Australia, and on December 10, 2019 in North America.