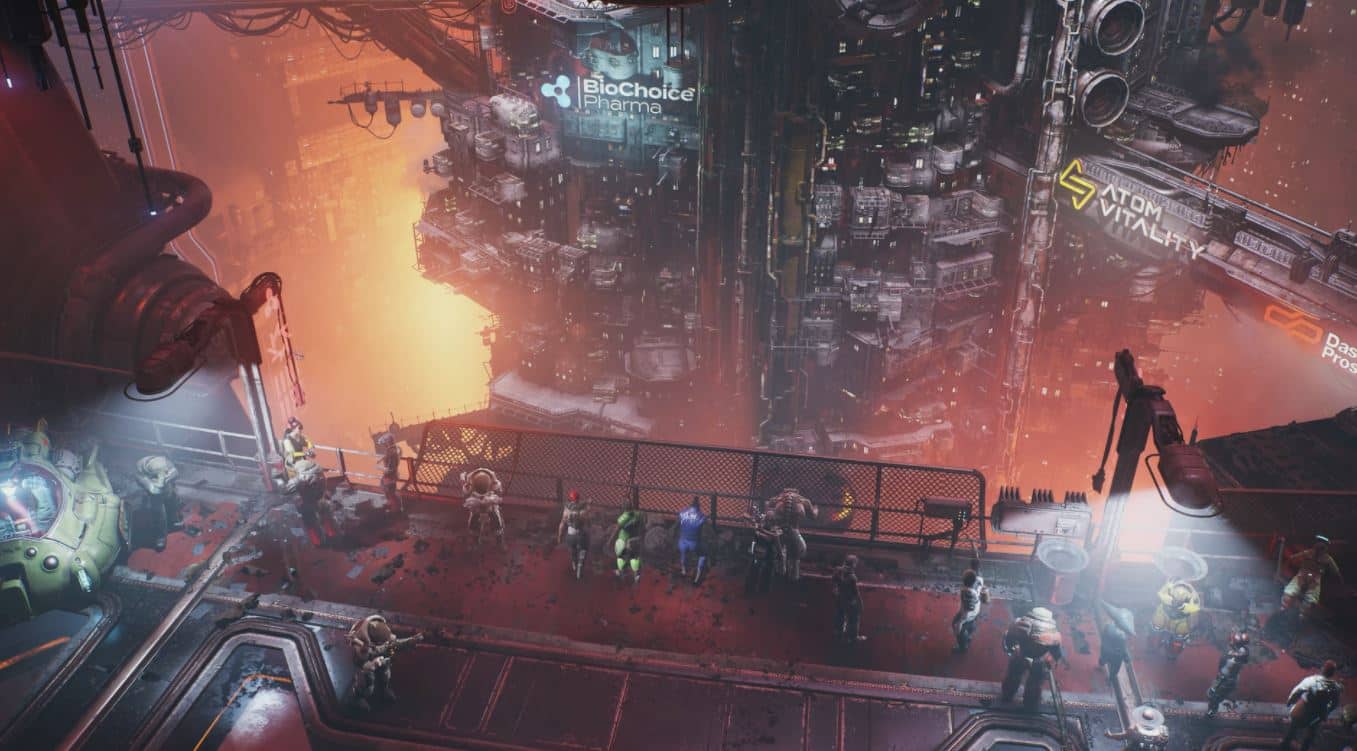 The Ascent PS5 review. Blade Runner meets Diablo with a dash of Cyberpunk 2077’s pre-release promise – could there be a more intoxicating mixture than that? Well, I’m sure there probably is for some of you but for this humble author at least, the very notion of blasting and looting around a neon-lit cyberpunk hellscape that lovingly taps into the best examples of the genre in film and other media, is one that appeals greatly and in The Ascent that marriage has never looked (or sounded) better. Brought to life by Neon Giant, an extraordinarily talented team of just twelve developers, The Ascent looks and plays like a full sugar, full fat, triple A dungeon crawler in a way that similar efforts from bigger developers simply do not.

Blade Runner Meets Cyberpunk 2077 Meets Diablo – What’s Not To Like?

Eking out a paltry existence in the bowls of The Ascent Group arcology, a sprawling, corporate-run cityscape that touches the sky and is inhabited by all manner of creatures from across the galaxy, you and everyone around you belong to a monolithic company which runs and owns everything. The proverbial brown stuff hits the fan however when the Ascent Group goes dark suddenly, cutting off the many slums, districts and other residential areas that depend on the corporation for their survival and creating a power vacuum in the process which is quickly filled by the many opportunists and cutthroat gangs of the lower levels of the arcology. 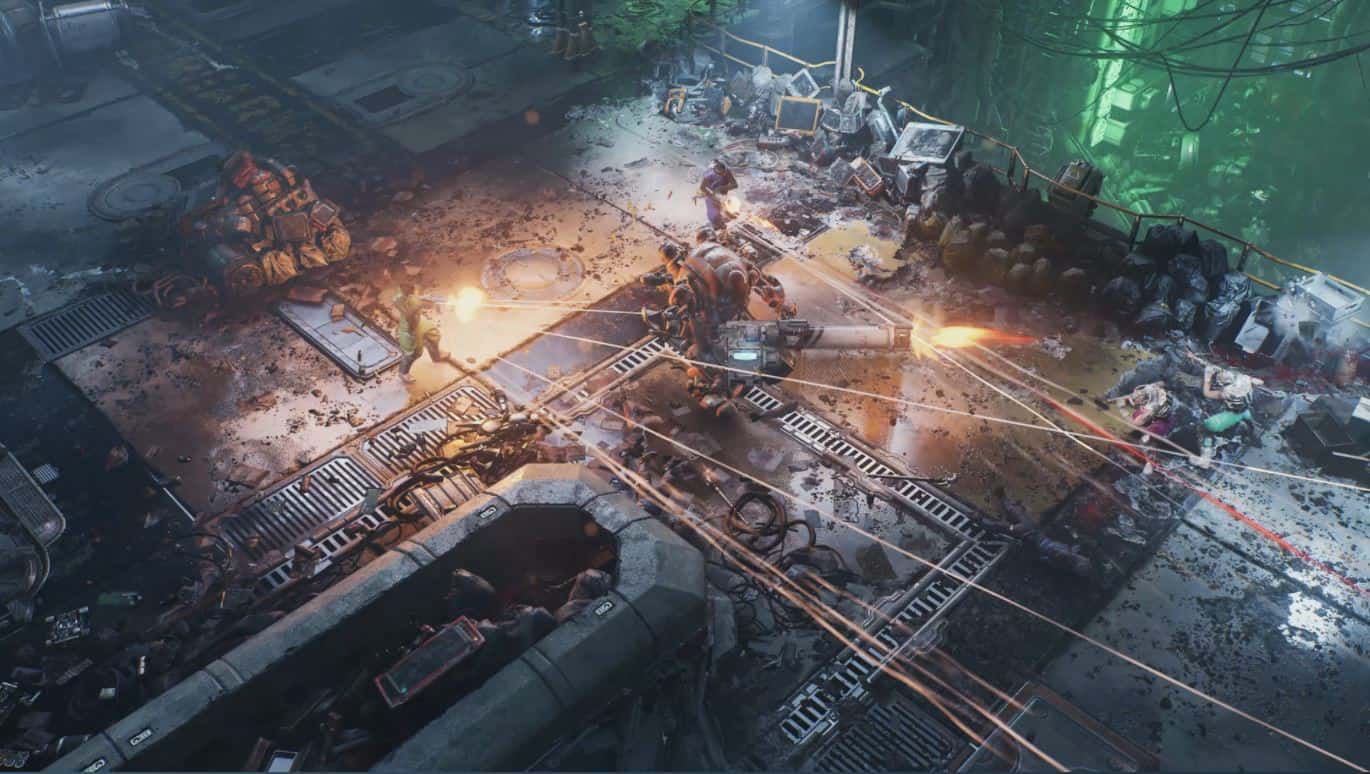 Your job then, as you may have guessed, is to strap up, make some alliances and blast your way upward through The Ascent in order to secure your own survival and uncover the mystery behind the sudden collapse of the corporation behind the arcology. After learning of the story that serves as the bedrock for The Ascent’s twin-stick shooter shenanigans, it’s onto the character creation suite. Here though, as there are no classes in The Ascent, character creation solely exists for cosmetic purposes and while the lack of classes is something of an omission to a degree, the character creation system nonetheless lets you craft some badass looking characters all the same.

Once into the game proper, you’ll spend your time wandering around the arcology from an elevated isometric perspective, blasting fools, taking on side missions, collecting ‘Ucreds’ to upgrade and purchase new gear and, of course, looting increasingly better weapons and armour from the corpses of your progressively stronger fallen foes.

Though there is no class structure in The Ascent, there is nonetheless a robust, if perhaps overly familiar progression system which allows you to level up and plough experience points into such categories as additional hit points, better critical damage chance and more besides, while the ability to augment your character with a variety of passive and active skills (such as the ability to fire a swarm of Iron Man style rockets from your shoulders into the midst of your enemies), provides yet further scope for meaningful progression and character improvement. 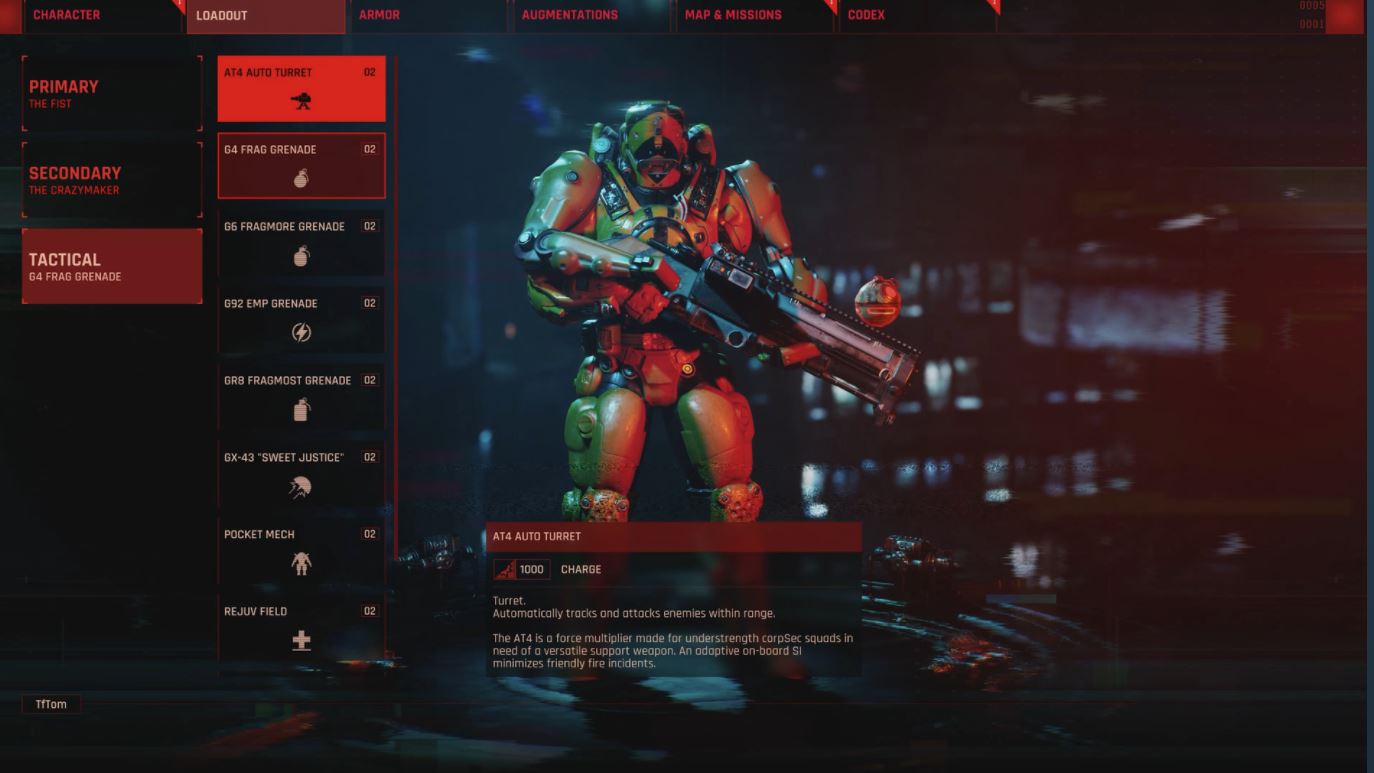 Much more than just a pretty face (more on that in a bit) the moment to moment combat of The Ascent is extraordinarily satisfying to say the least. Starting with the gunplay, from pistols to shotguns to energy weapons and just about everything else in between, every gun that you’ll fire in the Ascent simply sounds and feels incredible. Honestly, the gun sounds are so good that I’ll occasionally fire my weapon at absolutely nothing – just to hear the thrum and roar of my chosen firearm doing its murder rattle, while the haptic feedback of the DualSense controller kicks back with the appropriate feedback depending on the gun currently being discharged. It’s thoroughly great stuff.

Beyond the superficial layer of the combat, The Ascent plays out in a familiar manner, with your character able to deploy a number of skills (see the Iron Man style rockets example from earlier) in addition to your choice of firearms, to get the job done against increasingly more difficult enemies. While an expected evasion mechanic features – allowing you to leap out of harm’s way at a moments notice – The Ascent also boasts a cover mechanic that allows you to hide behind objects in the world to both prevent incoming damage and return fire from cover simultaneously.

Where The Ascent lets itself down somewhat in this regard, is in the rhythm of its action, or in some cases, the lack thereof. When tackling the various enemies, some of which that appear in the game world as you enter new areas, or others that are sometimes literally dropped in next to you by a passing vehicle overhead, it soon becomes clear that the enemies just aren’t that smart for the most part; with many of them just blindly charging toward you and rarely making use of cover or flanking opportunities in the environment. 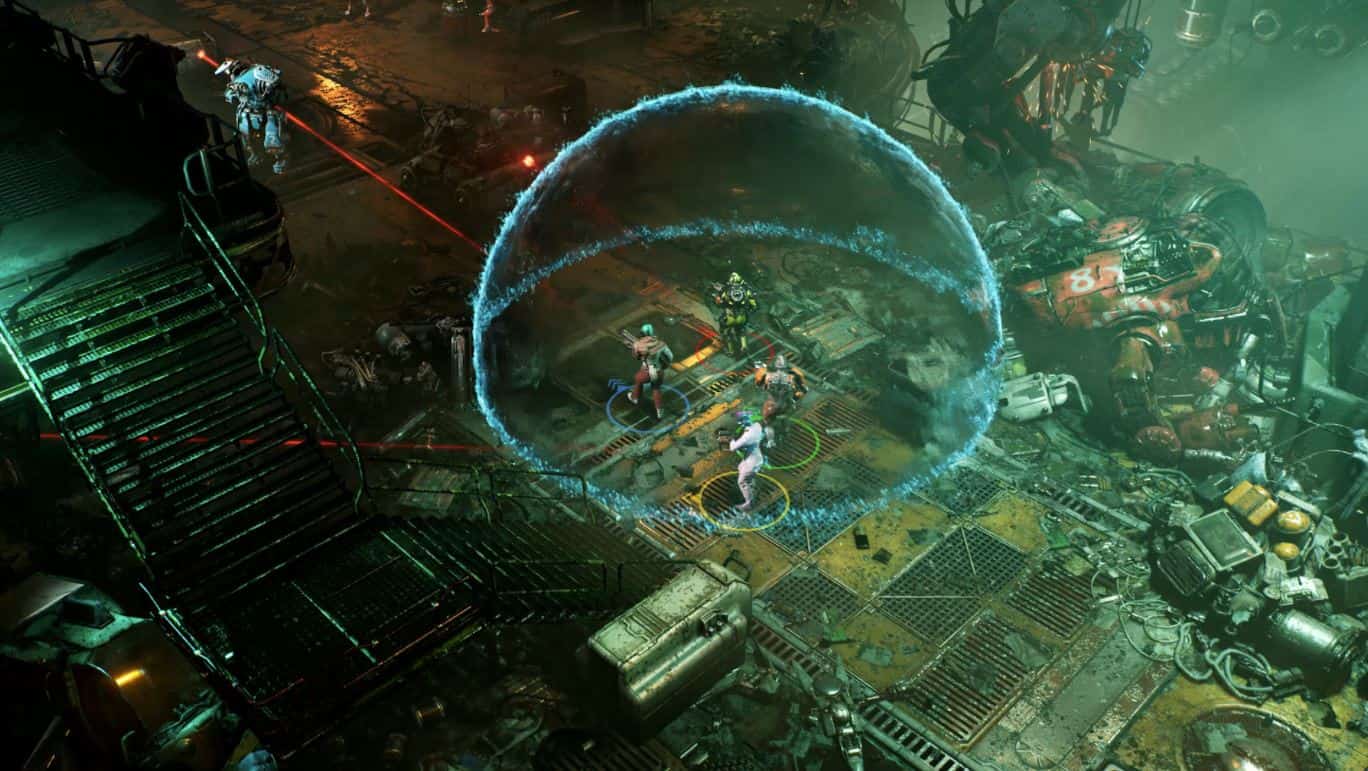 Another issue is the way health is handled. Because your health doesn’t regenerate during battle (outside of one or two special skills that can be temporarily activated in combat), you’ll need to collect health pickups that can be looted from the broken forms of your defeated foes, while nearby item terminals also allow players to trade precious Ucreds for similar health replenishing items.

Annoyingly though and quite unlike other genre efforts like Diablo, when you pick up a health kit it is automatically consumed if you are injured, but if you’re at full health, you cannot pick up the kit and elect to use it later. This essentially disrupts the rhythm of combat in The Ascent, as you can very often find yourself spending precious time scavenging for health kits during an especially challenging encounter, rather than being able to plan ahead and store medical kits for later use during such battles.

A bigger problem though, is the sheer amount of plodding around you’ll do in between blasting enemies apart and completing mission objectives. Though you’ll spend a chunk of time chatting to NPCs and taking on various main story missions and sub-missions, The Ascent is really much closer to something like Diablo than a fully fledged RPG like Cyberpunk 2077. The problem is that despite boasting a somewhat limited fast travel system that lets you quickly transport to a reduced set of specific locations, there are still extended periods of downtime in which you won’t really be doing anything other than running from one point to another with none of the wanton carnage in-between that The Ascent does so well. 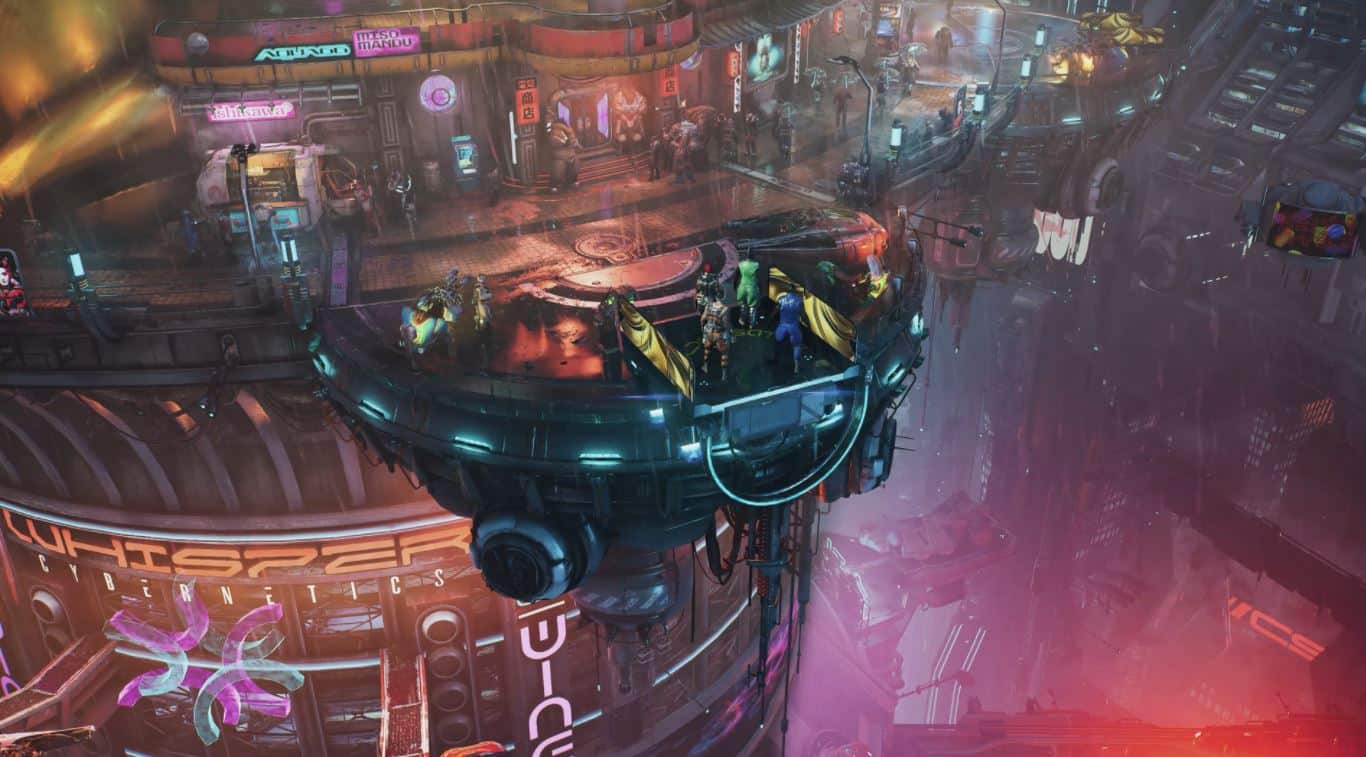 Of course much like every other dungeon crawler since the dawn of time, though The Ascent’s campaign can be tackled solo, it’s really in the local and online multiplayer modes that the lion’s share of the enjoyment resides. Whether you’re taking down a whole gang of Ferals together, double-teaming a screen-filling boss or just stood there, collective jaws agape at the absolutely stunning scenery, The Ascent certainly remains a contender for your next favourite co-op game of the moment.

Ostensibly though, the single most striking aspect of The Ascent is the stellar audiovisual presentation that underpins the creation of a stunningly realised cyberpunk setting. Leveraging Unreal Engine 4, The Ascent is absolutely cluttered with all manner of glossy lighting, detailed shadows and other tremendous effects that all underscore the polish which oozes out of every pore of its insanely detailed cyberpunk setting.

Cables jut out from the wall like a mass of listless tentacles while all manner of fans, terminals and automatons go about their existence. Elsewhere, fans cycle light and shadow into the environment in a way that evokes Blade Runner while steam bellows out of holes in the wall – the bleeding wounds of a cyberpunk colossus whose ungainly form scrapes the heavens. Honestly, there is so much constantly going on in the environment at any one time that you can’t help but stop and stare at what Neon Giant, this team of just twelve talented individuals, has managed to create here. 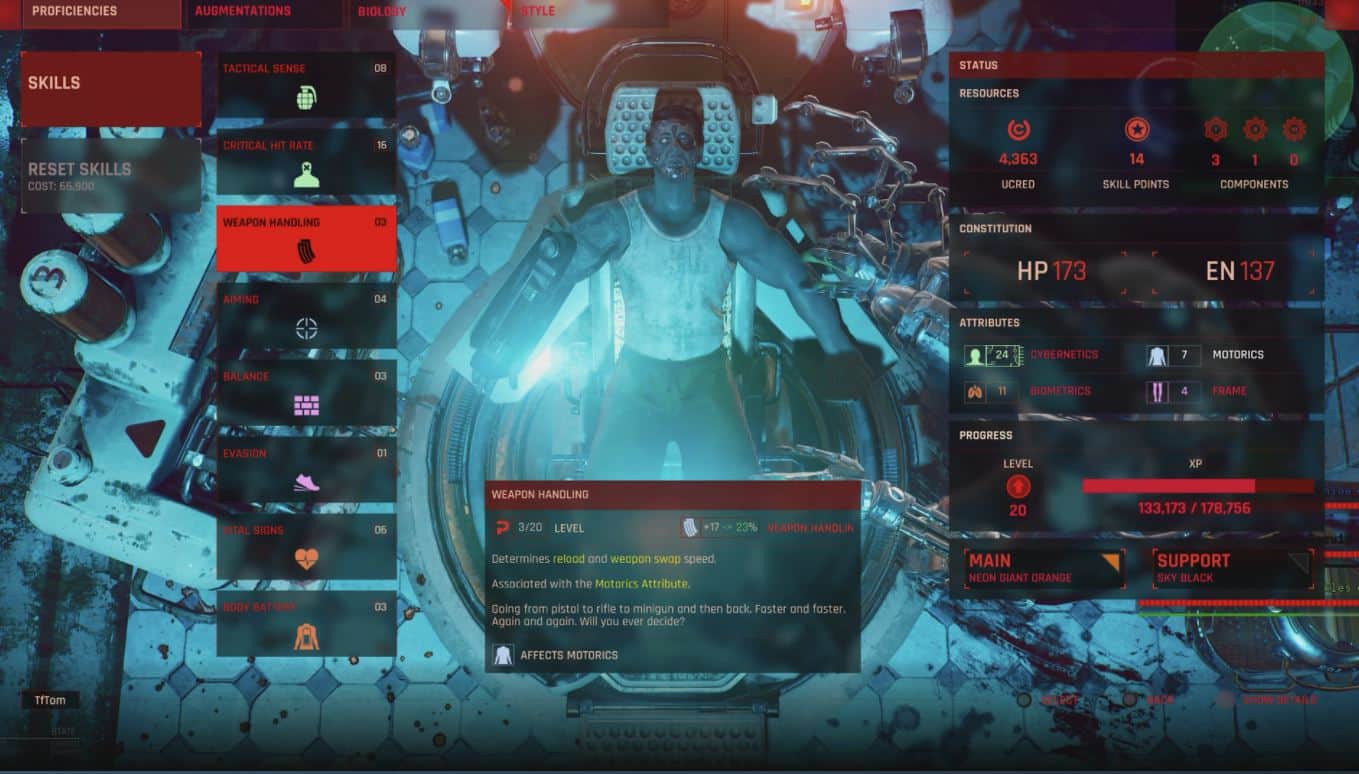 Away from the visuals, The Ascent’s audio calibre is also deeply impressive. Not only does the soundtrack deeply evoke the haunting melancholia of Ridley Scott’s Blade Runner during its more relaxed and explorative moments, but it also oscillates to much more pulse pounding beats that really get your blood running when the bullets start flying. On a related note, the DualSense controller is used to immersive effect here too as the closer you wander to a nightclub with thumping music, so too will you feel the beats of the music through the controller. It’s properly engaging stuff that really succeeds in pulling you into The Ascent’s grimy, neon-stained world.

Again and I cannot say this enough, The Ascent is easily one of the most polished games, from any genre, that I’ve played in a while. Of course, a more cynical mind would say that The Ascent is a freewheeling triumph of style over substance but that would seem harsh. Though Neon Giant’s inaugural effort is the sort of audiovisual treat one would readily expect from much more resource heavy triple A studios, the fundamental dungeon crawling and twin-stick shooter beats that underpin the core experience are actually resoundingly solid – while the mainlining of its massively crunchy and satisfying combat helps to sustain The Ascent far beyond what it’s modest genre fundamentals might otherwise suggest.

A robustly entertaining cyberpunk dungeon crawler wrapped up in some of the most sublime audiovisual presentation and thoroughly satisfying combat to come along in a good while, though it isn’t quite as ambitious as I would like it to be, the Ascent is nonetheless a fantastically entertaining offering that will appeal to genre fans of cyberpunk settings and dungeon crawlers alike. I cannot *wait* to see what Neon Giant comes up with next, because as far as first efforts go, The Ascent is an absolute knockout.

The Ascent is out now on PS4 and PS5.

A robustly entertaining cyberpunk dungeon crawler wrapped up in some of the most sublime audiovisual presentation and thoroughly satisfying combat to come along in a good while, though it isn't quite as ambitious as I would like it to be, the Ascent is nonetheless a fantastically entertaining offering that will appeal to genre fans of cyberpunk settings and dungeon crawlers alike.