Given how face-meltingly strong the first Banner Saga ended up being, it seems almost silly to think that developer Stoic would allow the wheels come off the wagon with the second instalment in the series. Thankfully, those talented folks have only gone and crafted the Empire Strikes Back of trilogy middle acts; one that not only honours those founding principles of its predecessor but also meaningfully improves upon on that pioneering first instalment in just about every way. 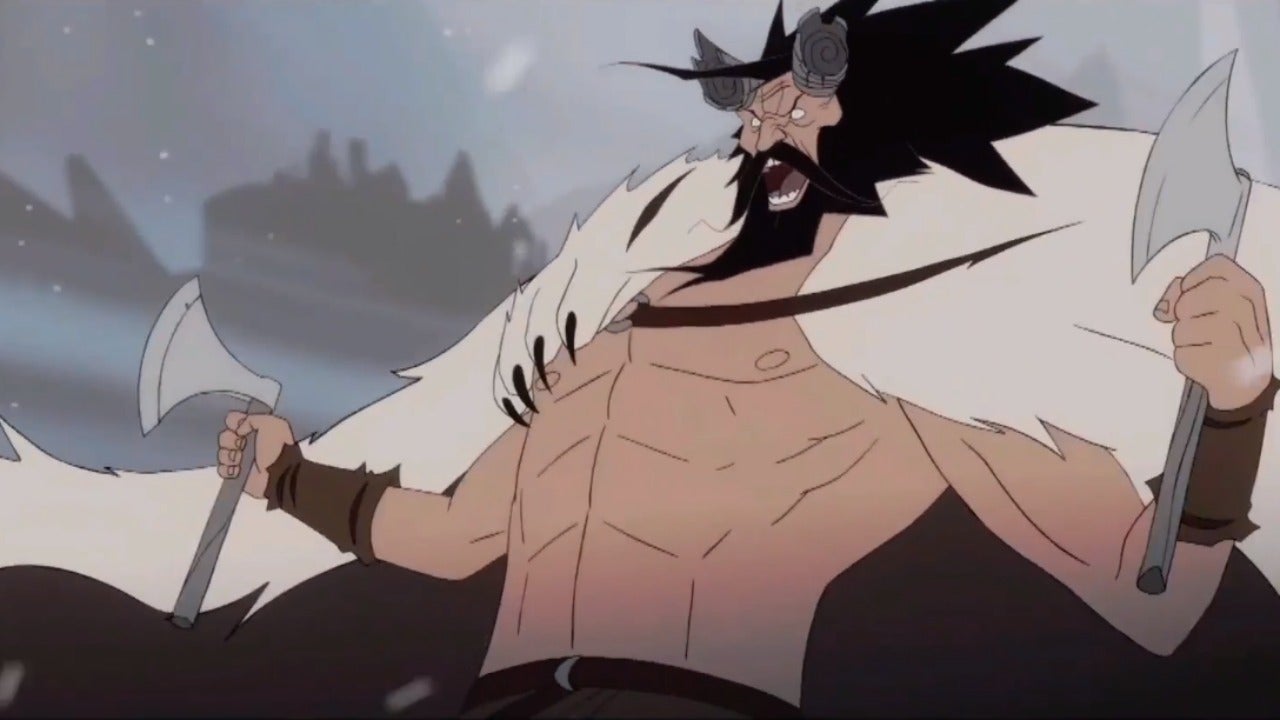 Right off the bat/club/mace, The Banner Saga 2 embraces its place in the trilogy by doing that great old thing of allowing you to import your save state from the previous game, bringing all your characters, items, and narrative histories over to the middle instalment in the trilogy without any fuss whatsoever. Luckily, for those of you who haven’t played the first Banner Saga (you really, really should), its sequel allows players to start the game with a pre-written story and cast of characters, while a handy recap function lets you take stock of what transpired previously.

Speaking of the plot and by proxy some unavoidable spoilers, The Banner Saga 2 kicks off more or less straight after the fall of the powerful big bad known as ‘Bellower,’ and sees our motley crew of heroes picking themselves up after the loss of one of their numbers as they proceed, weary and battle-worn, through the frigid tundra in flight from the evil Dredge horde.

Aside from this initial narrative gambit, The Banner Saga 2 replicates the same trick that its predecessor pulled, splitting the narrative between two different groups and liberally hopping between the two at various intervals in the story. What we get as a result is a fresh and dynamic narrative that evenly paces itself between the trials and tribulations of the main caravan that we journeyed with in the previous Banner Saga instalment and the newly introduced mercenary group, The Ravens, led by the volatile, dual axe-wielding giant known as Bolverk.

In addition to playing differently than each other (The Ravens arguably favour a bolder, more brute force approach to their Viking violence), each group also feels properly separate from one another in both tone and attitude, with the main caravan feeling much more like a perpetual struggle for survival while The Ravens come across much more like an organised group of opportunists and thugs by contrast. Beyond such changes, the overarching story hook of taking a bunch of Vikings on what is essentially an extended road trip against the backdrop of the end of the world remains both wonderfully intact and hugely compelling here, arguably continuing to state its case as one of the Banner Saga’s best and most distinguishable narrative features.

The Art of War Redefined If the changes wrought on the narrative side of the equation seem substantial than more considerable still are the alterations made to the Banner Saga’s bread and butter – the combat system. First of all, morale plays a significant role now, with a lack of rest, food, and general fortune impinging on your fighting performance by resulting in penalties to your ability-enabling willpower points. Thusly, it’s impressed early upon players that a well-fed, rested, and motivated caravan is one that also fights effectively too, so be prepared to set up camp early and often to take care of your troops.

Something else that the Banner Saga 2 now does which its predecessor did not, is that it forces players to consider the balance of fighters and regular clansmen (non-fighters, essentially) that exist in their camp. Rather than being dead weight as before clansmen actually serve a purpose now as they can go off and forage for food to top up your caravans precious supply reserves. Further afield an in-camp trainer allows you to turn clansmen into fighters to bolster your ranks, raising the important notion that a balance must be struck; do you train clansmen to become fighters, thus lowering your foraging capacity but increasing protection of the caravan should you find yourself under siege? It’s these sorts of macro-tactical questions that the Banner Saga 2 constantly forces upon players and as such, its take on strategy feels all the more sophisticated and frankly better as a result.

While the heralded Fire Emblem series ultimately remains as a key touchstone for the battles in the Banner Saga, they too have also been improved upon. In addition to the many new non-human creatures that can be tangled with such as the noble Horseborn, towering bears (which can be tamed), and the grotesque looking Skulkers that look like they failed an audition for the upcoming Alien: Covenant movie, the Banner Saga 2 also brings with it obstacles that can be leveraged strategically, enabling players to put them between your forces and those of your enemy for maximum tactical advantage.

Another neat touch is that, quite unlike the first Banner Saga, combat and narrative now feel much more cohesive and inextricably linked. One example is a fiercely pitched battle against an army of encroaching Dredge early on, where a pair of Menders are trying to forge a magical bridge to spirit the caravan across a chasm, all the while the obsidian, abyssal Dredge horde presses forward aggressively in an attempt to sandwich your beleaguered forces in between. Furthermore, the additional dialogue and cinematic flair employed in abundance makes the transition from dialogue to battle practically seamless and much less like the seemingly isolated skirmishes of the Banner Saga 2’s predecessor.

Perhaps most intriguing of all is that battles aren’t always resolved by max-murdering the other side, but rather by completing one or a number of primary objectives, such as incapacitating a particular foe or waiting out for a particular amount of time. Once more this just confirms that the developer’s approach to future instalments of the Banner Saga—careful iteration instead of wholesale change—arguably results in an effort that simultaneously retains its strengths whilst also expounding on them with aplomb.

Ostensibly, the largest influencer to battles is the narrative choice system that has been brought back for the Banner Saga 2. Here, much like the first game, the choices that players make in the story directly affect not just the conditions of each battle, but whether or not those battles even take place at all. A wrecked caravan discovered on the trail, for example, might conceal hidden treasures or an ambush that will test your tactical acumen to its limit; in either case, the Banner Saga 2 continually invites players to shape their own journey and fortunes, placing a bespoke premium on the virtue of risk versus reward.

As was the case with the first instalment in the Banner Saga trilogy, the Banner Saga 2 presents a sumptuous audiovisual offering that once again proves to be a real treat for the senses. The 80’s style, Don Bluth cartoon aesthetic that made the Banner Saga stand out when it debuted on crowdfunding platform Kickstarter all those years ago has been emboldened yet further with an increased frequency of gorgeously animated cutscenes, more sophisticated environments and a range of new and beautifully detailed character models.

Elsewhere, the audio side of things fares just as well with Austin Wintory’s stunning orchestral score doing a grand job of capturing the Nordic myth and culture with the sort of vigour and affection that few other soundtracks could possibly match. The insistence on having a largely Nordic voice cast also continues to pay dividends from an atmospheric point of view too; their husky tones proving indispensable to the convincing immersion wrought by the game’s presentation.

Chinks in the Armour

As was the case in the first Banner Saga, Renown is effectively currency for both levelling up your characters and purchasing new items for them to use during battle, and in the Banner Saga 2 the developers have added an extra way for you to accrue it. Battle-based challenges can now be attempted in your training tent, which upon successful completion of all their stated objectives, allows players to scoop up some extra Renown.

Sadly however, these challenges fall short because the objectives which must be fulfilled often rely on the enemy being in very particular formations in order to be completed (Hakon’s heavy impact attack for example needs three enemies in a line to work) and by being so wholly dependent on the whims of the AI, you can see how frustration might set in and cause your controller to be the ball in an impromptu room-scale pinball table. Referring to the Banner Saga as “Fire Emblem of Viking Thrones” might seem both horrifically reductive and monumentally clumsy, but yet such a ham-fisted comparison ultimately rings true. A comfortably deft hybrid of evolved strategy, narrative and adventure elements, this sophomoric instalment in the Banner Saga feels like a genuine improvement in just about every way that matters and, perhaps more enticingly, sets the stage for a grand finale to cap off one of the greatest videogame trilogies of recent years.

An ambitious and yet more elegant evolution over the first Banner Saga, The Banner Saga 2 fires on all cylinders and provides one of the newest and most enthralling strategy series money can buy with an absolutely belting middle act. Much like the horned, Norse warriors that make up the rank and file of its cast, The Banner Saga trilogy is shaping up to be a fearsome entity indeed; its place in the pantheon of great strategy games already comfortably established.