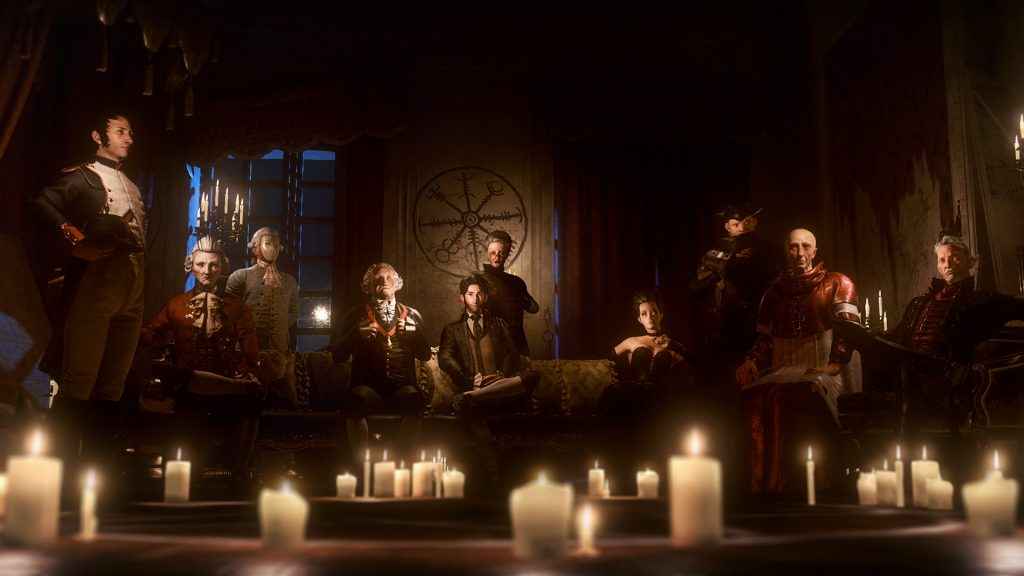 The Council Episode One review code supplied by the publisher.

Between the reliable rhythm of Telltale Games output and the occasional episodic saga which emerges from elsewhere in the form of Life is Strange, though the narratives differ from one to another, it’s fair to say that none of them have sought to delve under the hood and change the fundamental cornerstones of the genre in any sort of meaningful way. The Council, from freshly minted French studio Big Bad Wolf, looks to change the status quo by injecting RPG class, skill and progression systems into the traditional point and click-lite template that has defined the genre for years, and you know what – it actually works.

The Council Episode One – A Deep, Fresh Take On Adventuring

Taking place in 1793, The Council casts players as the wondrously named Louis de Richet, a member of a secret society that has for the longest time sought to seek out and nullify the corrupting and destabilising elements in the world to allow mankind to ascend to a new era of peace and prosperity. Events take a decidedly sinister turn however when Louis receives a communiqué from the mysterious Lord Mortimer, informing him that his mother, who is also the head of the secret order that he belongs to, has gone missing while attending a function at his private island.

Spurred on to uncover the fate of his mother while also seeking to satiate his curiosity regarding the mercurial Lord Mortimer, Louis accepts the invitation and it isn’t long before he arrives at the island and ends up sharing company with some highly noteworthy guests such as President of the newly-formed United States of America, George Washington and infamous French military leader, Napoleon Bonaparte.

Although The Council seemingly subscribes to the same third-person narrative adventure template that has been pioneered by the likes of Telltale Games and DONTNOD Entertainment, it is actually a much more mechanically deeper and different affair than the efforts which have been birthed by either of those developers.

When you start up the first episode of The Council for the first time, immediately the thing which hits you in the face like a big brick on big brick steroids is the fact that the game asks you to pick a class – that’s right, an apparently linear narrative adventure is asking you to choose an RPG-style class and you’d be quite right to be curious as to why. Well, as it turns out, The Council employs a sophisticated Social Influence System whereupon your background and skills will directly affect the outcome of every interaction you have.

You see, in addition to the three starting classes of Diplomat, Detective and Occultist, each of those classes also boast skills that you can acquire. Picking subterfuge for instance, will allow you to have a chance at picking locks and accessing the goodies that lay within, whereas other disciplines such as politics and diversion unlock unique dialogue opportunities and actions that can in turn open up whole new avenues for Louis to progress through his adventure.

What really makes the skill system in The Council feel so sophisticated and unique is the fact that each person you speak to will have vulnerabilities and immunities for the various skills that you might have. Take Napoleon for example; as a seasoned tactician who has dealt with his share of politicking, he will likely prove immune to any political overtures that you might make, thus rendering that line of inquiry to be utterly useless. On the other hand, his somewhat fragile ego might mean that he’s prone to a line of questioning that would only be enabled by Louis possessing a background in psychology, and thus, Louis could gain some valuable insight that he might not have been privy to by using those skills.

Another brilliant example of The Council’s superb Social Influence System at work was when, after a casual conversation went awry with a soldiering brute, I received a savage right hook that put me on the ground and knocked my lights out. Fast forward minutes later, and I found myself attending a social function with the same aforementioned thug, however, because I had skill points in etiquette, I was able to embarrass him in front of his peers as he struggled with the order in which he should use his cutlery. Delicious revenge, it seemed, was mine.

And this is the thing, no other game on the market quite manages to make the art of conversation and negotiating social strata quite as compelling, satisfying or as deep as The Council manages to, and for that alone, what developer Big Bad Wolf has accomplished here is nothing less than commendable; an achievement which is magnified when you consider how mechanically stagnant the narrative adventure genre has been of late. Furthermore, the much wider variety of playthroughs that the Social Influence System enables also means that The Council offers much more replayability than any other of its genre contemporaries.

As grandly entertaining and effectual as the Social Influence System is in The Council, it has a number of organic limitations built into it which both serve to prevent player abuse and keep things fairly balanced. To use each skill that Louis has at his disposal, the player must spend the effort points which the skill requires, with the amount needed depending entirely on how many experience points have been put into them.

Fortunately, those experience points that you’ll be lusting after can be obtained by collecting clues, succeeding in exploiting a character’s vulnerabilities and discovering secrets, while you can also collect a number of books and tomes, which when equipped at the beginning of each new act, grants Louis certain permanent bonuses in a number of different skill areas.

Likewise, a variety of consumable objects can be used to restore your effort points, or negate your effort point cost on your next skill use for example, but an over consumption of these items can make you intoxicated, and thus unable to see the dialogue timer among other maladies. As such, it soon becomes crucial that you carefully consider what you use and when you use it. It’s quite a different sensation to be experience point hunting and managing your skills and abilities in a game like this, rather than just allowing the linear pull of the narrative to sweep you along with nary a concern for anything else.

Beyond the Social Influence System that serves as the unmistakeable core of The Council, one of the other most intriguing things about the game is that it lets you fail and makes you live with the consequences. In one example, I had to reveal secret writing in a book using a special solution; the problem was, I tried all the wrong methods first and by the time I got to the correct one, I had done so much damage to the book that only half of it was legible – but yet I was able to proceed on all the same.

As stellar an impression as this inaugural episode of The Council makes, there are a few shortcomings which tarnish its overall offering. For a start, genre fans raised on the Telltale rhythmic diet of conversation-QTE-conversation-QTE, will be disappointed to discover that The Council features hardly any cinematic action whatsoever as instead the developer has clearly placed a bespoke focus on a much more cerebral and dialogue centric affair. Equally it’s also clear that, in this first episode anyway, that The Council could do with a little extra polish. From an inconsistently accomplished team of voice actors (Louis VA is hugely cringeworthy early on), to occasionally flickering textures and poor lip-synching on some character models, it’s obvious that The Council could have done with some extra dollop of polish or two.

All the same, and a handful of mild shortcomings aside, The Council succeeds in putting both the brains and consequence back into point and click adventuring, and if it can keep this sort of momentum and innovation going in future episodes, Big Bad Wolf could have something very special indeed on their hands. You don’t want to sleep on The Council.

The Council Episode One is a thunderously promising start for this fresh, sophisticated and intelligent take on the narrative adventure.

The Council Episode One – The Mad Ones