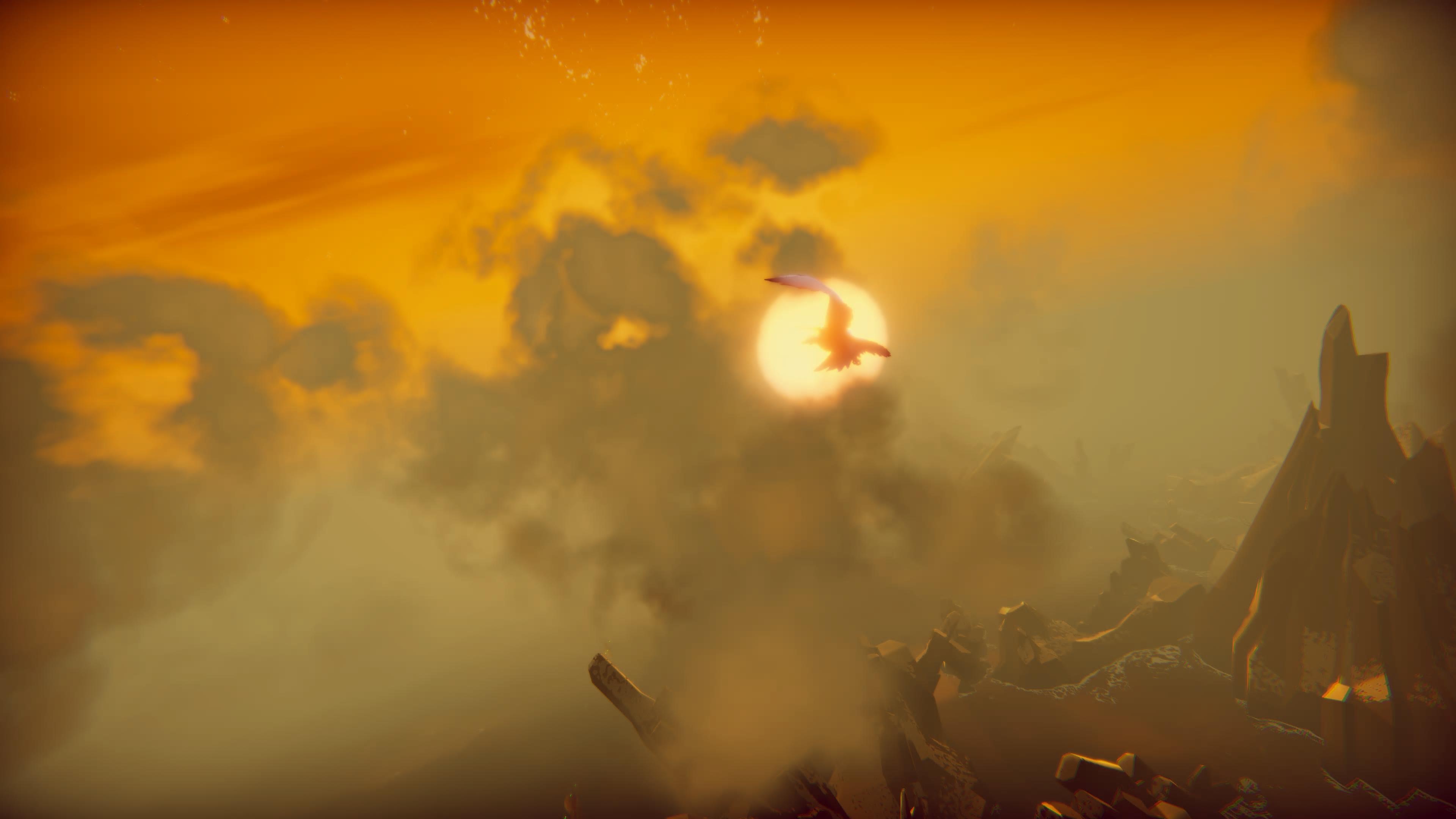 The Falconeer PS5 Review – The Falconeer, developed by Tomas Sala, originally released with the Xbox Series X/S as a launch title, and is only now making its PlayStation debut. I played it on an Xbox One S when it first launched, and despite some minor issues, I thoroughly enjoyed it. However, the PS5 version, known as The Falconeer: Warrior Edition, is what I would call the definitive way to play, with a level of immersion that sends The Falconeer soaring to new heights.

A Narrative From Multiple Sides

You might not expect the narrative to be the thing that compels you to keep returning to The Falconeer, but it just well might be. The story is told over four chapters, six including the prologue and epilogue. Each chapter has you flying for a different house or family as the narrative’s events unfold, something I enjoyed quite a lot due to the variety in characters you met and how your actions in one chapter would then be dealt with in the next.

It also helped that the cast of voice actors are incredible, and do an excellent job creating memorable characters and expanding the world of The Falconeer. The story isn’t exactly a happy one, and neither is the ending, though by the end of it I felt an immense connection to each of the houses having seen and heard things from all sides. The people of the Ursee and their story are tragic, but they’re also inspiring as survivors, doing whatever they can to protect those they care about.

I’ll not delve further into story specifics as to avoid spoiling it for anyone, though what I will say is that the narrative only scratches the surface of what you realise is a lore-rich world. The people of the Ursee and their ancient histories are so interesting to uncover, even a second time around.

What also helped to flesh out the world this time however were the addition of three mini campaigns added with this release and the expansion Edge Of The World. Each of the three campaigns grounded the Ursee and its people further, and introduced what was by far my favourite campaign with the brewers of Casetllus, voiced by the incredibly talented Christopher Gee.

A Gameplay Loop That Ebbs And Flows

As much as I love the story it would have been a bore to try and muddle through it if the gameplay didn’t back it up, though thankfully it does. There’s a natural flow you fall into within the gameplay loop of The Falconeer, where one moment you’ll be peacefully and tranquilly flying through the skies, with a gorgeous sunset ahead of you. The next, the clouds darken, lightning strikes and rain falls as you’re caught in the middle of a massive firefight with all manner of creatures flying through the air.

Overall, the core loop works like a charm. When the action is done, it was always a relief to move back to a more relaxed, calm pace and I always felt ready for another fight when it rolled around. It also helps that you can essentially just spend your whole time in the game flying around, exploring the land.

You discover locations across the map rather than revealing multiple points of interest via a single tower – a common Ubisoft trope for the past decade or so now – and though it may sound small, it was far more interesting to me to all of a sudden learn I’ve flown over a new location rather than just having the map revealed to me after four trips to different towers.

The flying mechanics really start to shine when you’re in combat. You can weave sharply around enemies, and maneuver as quickly as you need to. It just takes a little practice, but you can eventually fly circles around your enemies by the end of the game, especially with an upgraded warbird like the new arbiter class.

As far as what you take into battle with you, my personal choice the whole game was the upgraded version of the standard blaster you start with.

The other weapons can add incredible variety to the game, mainly because they each dictate how you’ll want to be approaching battles, but I never felt the need to switch things up no matter the situation. In fact, there are many aspects about your gear and in-game mechanics that I found easy to ignore, but we’ll get to that later. Case and point: when it comes to fundamental gameplay mechanics, The Falconeer couldn’t be more solid.

It Feels Great And Looks Great

Besides the added content from the Warrior Edition of the game, everything I’ve already discussed is in the game that is already available on other platforms. What makes the PS5 version the definitive way to play as I mentioned earlier, is, unsurprisingly the DualSense controller.

Haptic feedback and the adaptive triggers are implemented wonderfully throughout the game, and were part of the reason I forged a stronger connection to The Falconeer while playing than I did before. It also helps that I’m playing it at a solid 60 FPS with 4K resolution on PS5, but the DualSense makes it come full circle.

Sony’s new controller makes the world of the Ursee feel a little bit more immersive thanks to each vibration. While the difference to some players might be small, it wasn’t for me, and the DualSense functionality greatly contributed to me enjoying the game my second time more than I did the first.

Also, while I just briefly mentioned the resolution and frame rate, they do need another shoutout because it truly is a spectacle just to fly around. I never got tired of seeing a sunset, or the stars up in the night sky as I soared casually through the air.

The game does include a Photo Mode, which I utilised greatly, though I do wish the legend was provided for you while it’s active, rather than having to pause the game and check the settings for the controls.

It’s a minor annoyance, but I commonly found myself pressing the wrong button by mistake while trying to centre my shot, and I can’t help but think that would happen less if I had a legend, or more ways to control the camera as we’ve seen in other games that have very robust Photo Modes.

The Landing Isn’t Exactly Smooth Though

As much as I adore The Falconeer, there are some issues to highlight. There are problems that plagued the original version and this PS5 edition, and while my added enjoyment this time around definitely made these issues easier to manage, they were still frustrating to experience.

You have a home base in every chapter, though that’s only important for remembering which faction you’re apart of. Once there, you have no ability to store warbirds or weapons, and you really don’t have any way of customizing your bird at all.

Not being able to store my warbirds but having to permanently switch to whichever one I just bought meant that I just flew around until I found the bird with the best stats, and kept it for as long as I could. This brings me to my next point: while your items and collectibles transfer with you from one chapter to the next, your warbird does not.

This is due to the fact the game makes you pick a new class at the beginning of each chapter. It’s definitely interesting to hear about the various upbringings people of the Ursee had, but it’s more annoying for me to have to re-purchase the bird I loved using just to progress in the story, or worse, be unable to buy that particular bird because the place that would sell it to me is now my enemy.

On top of that, the UI couldn’t help but feel confusing, even after 15+ hours of play. You have to find a place to perch if you want a look at your items, and while your weapon does transfer with you into the next chapter, buying a new weapon works just like purchasing a new bird in that you are permanently switching unless you fork out for the weapon you just had back.

The UI and purchasing rules are the two main factors as to why I didn’t pay close attention to many of the different items and single-use upgrades, or spend as much time with other weapons and strategies.

These issues definitely hold back The Falconeer from being the near-flawless experience it could be, but the truth is that everything else about the game is so intriguing and feels so good that any missteps are far from egregious.

Once You’re In The Air, You Won’t Want To Come Down

If you’ve ever wanted to feel like a bird and just fly away, then you might be a Nelly Furtado fan, but you’ll also be a huge fan of The Falconeer. It truly is able to perfectly capture the serene feeling of flying above the clouds, clear of the world with a front row seat to some beautiful sights, and the intense, heart-pounding moment to moment action in a dogfight.

It may be rough around some edges, but those issues are inconsequential in what is an otherwise outstanding experience.

The Falconeer: Warrior Edition is available on PS5 and PS4 on August 5, 2021.

The Falconeer: Warrior Edition is largely the same game that I already enjoyed when it first launched, but experiencing it on PS5 has made all the difference. The DualSense's features are well implemented, and the gameplay flows in such a way that you never want to put the controller down. Despite issues with the UI, and how certain aspects of how the game works, you can just get around them, and can avoid them altogether once you've moved into the endgame.