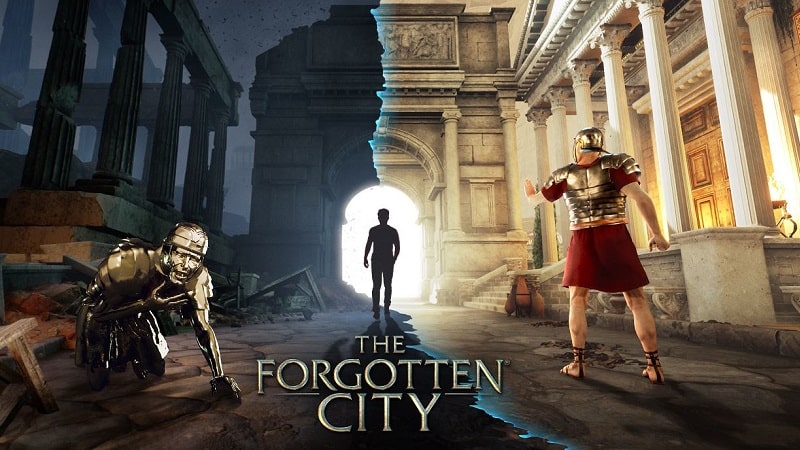 The Forgotten City PS5 review. As an amalgamation of concepts go, The Forgotten City is absolutely up there in terms of freshness that outstrips the sum of its parts, and well, you have to marvel at just the sheer ballsy ambition of what a primary development team of just three folks was able to achieve over a four year period. A time-travelling, time loop trapping detective adventure that takes place in a forgotten ancient Roman city, it’s certainly fair to say that very few games feel quite as conceptually stacked as The Forgotten City does.

Yet despite its lofty ambitions and occasional instances of visible technical creak, developers Modern Storyteller have managed to pull off a beautiful and often beguiling adventure, riven with twists, ever evolving mysteries and unique idiosyncrasies that will make you want to play it again and again.

A first-person perspective adventure that actually began life as a PC mod for The Elder Scrolls V: Skyrim many moons ago, The Forgotten City is a thoughtfully ambitious detective yarn that places an emphasis on conversation and deduction, rather than combat and insta-thrills. And yet, for just this approach alone, The Forgotten City feels like a tonic to the overabundance of twitch-based action titles that has come along as of late. 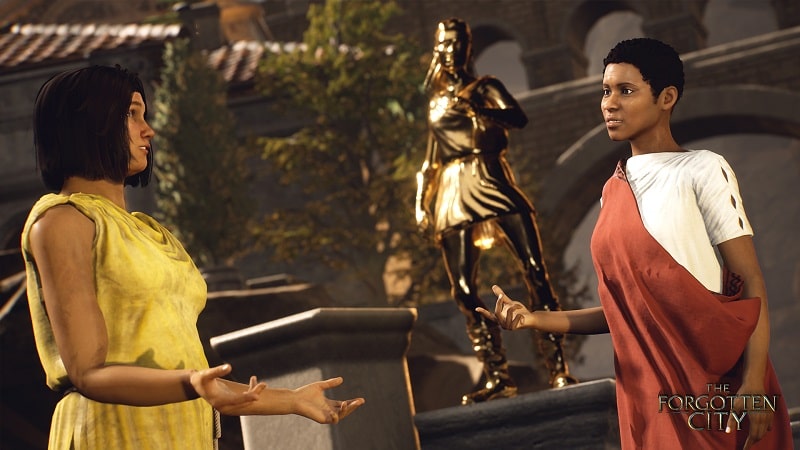 After awakening from a deep slumber on the banks of River Tiber more than 2,000 years ago, you stumble through brush and local fauna under a blanket of stars before a hooded figure greets you. Seemingly responsible for saving you from a watery grave, your saviour directs you to nearby a temple under which a chasm drops you into the bowels of the world and more pressingly, the titular Forgotten City.

An Ancient Roman metropolis that has been cut off from the rest of the empire, this subterranean city represents an evocative microcosm of Ancient Roman society from that time. From the shining finery of the villas of Roman nobility that are generously filled with marbled floors, lavish bathing areas, ornate stone pillars and an overabundance of food and wine, through to the dank, water sodden paved streets and tawdry stone structures of the slums where poverty and grief exist as a physical manifestation of the class divide, the Forgotten City does a tremendous job of bringing the spectacle of Ancient Rome to life to say the least.

Beyond being thrown back in time some 2,000 years, The Forgotten City offers up a pair of additional extraordinary circumstances for players to deal with. The first being that the faceless god in charge of the titular lost city has instituted the ‘Golden Rule’, a morality defining commandment which results in the mass annihilation of the entire city by way of golden gilding (hence the rule name, I guess) if just one person commits a sin. While the second circumstance, and most significant of the two, is that when the Golden Rule is broken, if you’re able to retreat to a special portal in time, you can start the day anew, but with all of the knowledge and items you’ve accumulated previously. 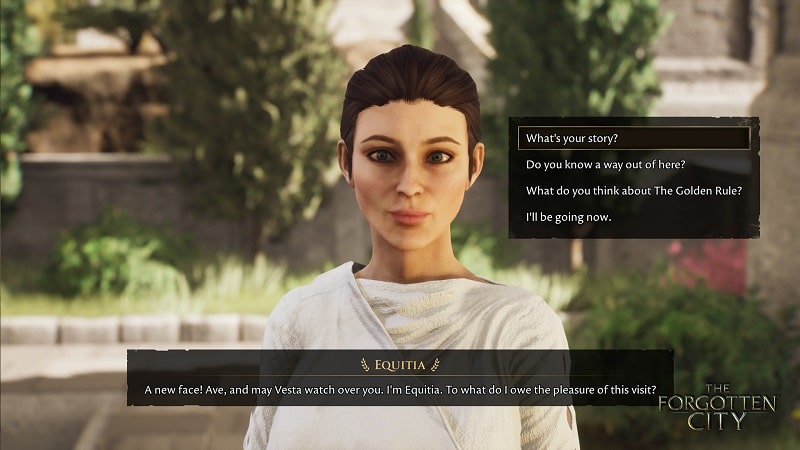 Ultimately, the goal is to break the cycle and escape the Forgotten City which you’ll do by speaking to each of the denizens of the city, understanding their plight, motivations and uncovering who might be planning to break the Golden Rule, whether that’s for purely emotional, or coldly rational reasons. There are layers to what you can achieve here too. With four very different endings and a multitude of branching paths that weave in and out of the main narrative, you’ll also be presented with ample opportunity to help each character resolve their own personal demons and conflicts, making The Forgotten City’s story feel much more dense and compelling than it’s otherwise lofty heady focus may have initially suggested.

Somewhat wonderfully, the dialogue spouted forth by the various characters of The Forgotten City is extremely varied and runs the full gamut of everyday chit-chat, through to deep musings and meditation on religion, politics, history and morality in ways that make you feel highly cultured by just taking part. Quite simply, if you have any sort of interest in those topics, then you’ll be pleasantly surprised with just how deftly and expertly each subject is both handled and intertwined with the main narrative; not to mention how the various debates that spring up throughout the game as it pertains to contemporary belief systems versus those from thousands of years ago.

There’s also something of a streak of sly humour running through the writing too, as The Forgotten City is clearly also very much a product of current times, referencing everything from the coronavirus pandemic to the failure of print media (trust me, it makes sense when you get there), among other topics which help to give it the sort of welcome edge that a more po-faced script might have lacked. 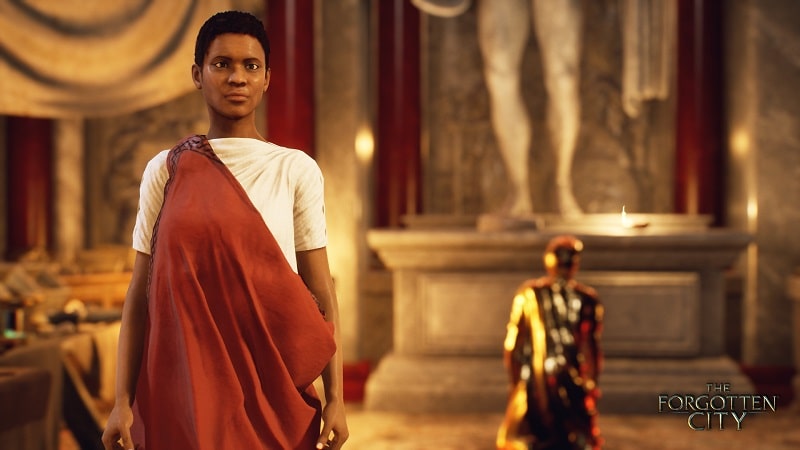 Conversation then is by far the primary mechanic through which progress is achieved in The Forgotten City. In your various chats and chinwags with the inhabitants of the Forgotten City, you’ll find yourself resolving conflicts, seeking out items and helping out folks escape from sticky situations. While this might seem trite in any other game, it’s the very notion of the Golden Rule combined with The Forgotten City’s Groundhog Day shenanigans that make all of this feel so much fresher than it otherwise would.

You see, in your various dialogues with the good (and not so good) folk of the Forgotten City, it’s entirely possible to put your foot squarely in your own pie hole by insulting someone and not actually realising it. For instance, a sly barmaid might seem to be something of an opportunist, coming onto you and generally flirting. If you respond in kind, she’ll shut you down for being arrogant and then will refuse to speak to you. However, the next time you relive that day, you’ll be much more acutely aware of what sort of person she is and direct your dialogue choices accordingly, opening up previously inaccessible talking points and new opportunities as a result.

This concept is manipulated in some excellently thoughtful ways in regards to the quest design of The Forgotten City, too. In one example, there is a woman that you need to speak to in order to gain some incriminating information on a magisterial candidate. However, the first time you meet her, she’s on the cusp of dying thanks to a poison she ingested in a suicide pact with her equally doomed lover. Once you’ve obtained the reagent required to heal her condition after her death, you loop to the next day and provide her with the medicine, healing her condition and then opening up a number of different story paths as a result – including a quest path to reconcile her lover which in turn affects other parts of the story. 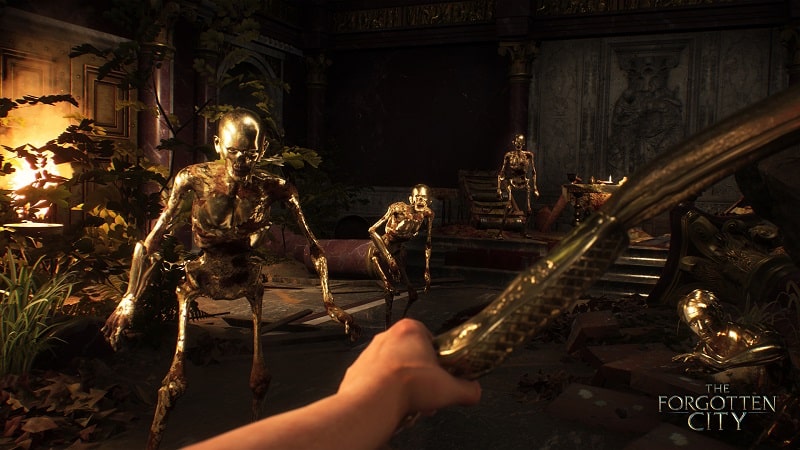 Brilliantly linking everything together is the fact that all the denizens of the Forgotten City go about their day in real-time. This means that events will unfold entirely without your influence, as the various peoples of the Forgotten City will follow their daily routines, meetings and social appointments with each other, leading to predestined results that you can alter in a future loop by interjecting at key points and thus preventing certain events from every occurring and in the process, leading to the rise of completely unforeseen circumstances as a result.

It’s properly satisfying stuff that feels like a delicious combination of Sherlock Holmes, Groundhog Day and Back to the Future, and I’m absolutely, positively here for it. Quite simply, the game world feels tremendously malleable in a way that I haven’t really experienced since the superb Sexy Brutale – another time-travelling indie epic, except here the mystery you’re presented with feels so much more complex and deeply interlocked, as if you’re dropping stone into a pool and watching how the ripples affect everything that it comes into contact with, resulting in one of the most satisfying and ambitious narratives that I’ve experienced in quite some time.

As wonderfully satisfying and intelligent as the dialogue is, it does falter somewhat in its execution. Chiefly, this comes in the form of dialogue choices that are exactly same for each character that you encounter. After all, there’s only so many times you can ask ‘what’s your story’ or ‘how do we get out of here’ before rolling your eyes so hard that the Earth tilts off its axis. It’s a small thing in the grand scheme of things certainly, but providing different variations on what is essentially the same query would have gone some way to making the dialogue choices feel a little more organic natural rather than seemingly copy and pasted, and it undercuts the great writing seen elsewhere in the game as a result. 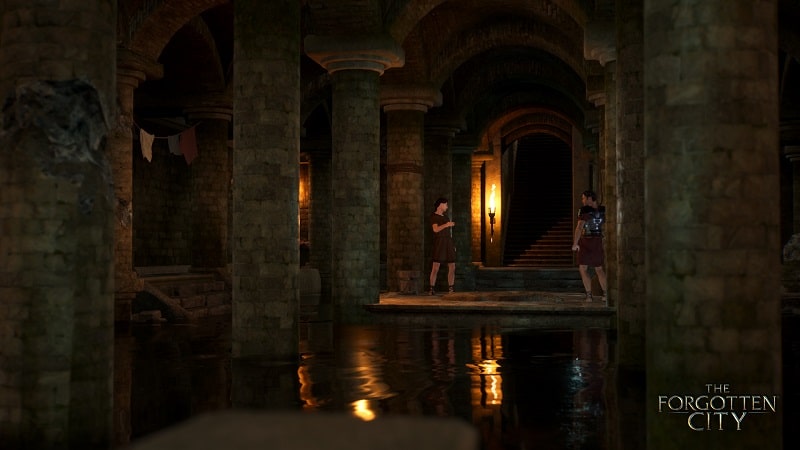 Another area where The Forgotten City doesn’t fare quite so well is in the technical side of things. Though The Forgotten City could be considered picturesque in even its lesser moments, there’s still a noticeable amount of visual glitches which include you end up falling through the odd wall and witness NPCs appearing oddly stuck on scenery.

Certainly the technical lineage of The Forgotten City being based on a Skyrim mod bleeds through somewhat, as characters can be awkwardly animated in that same familiar gait of Bethesda’s RPG epic, which though jarring, don’t quite detract as much from what is otherwise a beautiful offering as you might think. On the plus side, the lip-syncing of the various characters in The Forgotten City is streets ahead of what we’ve seen in The Elder Scrolls V: Skyrim, which given the dialogue heavy gameplay makes complete sense.

If it wasn’t clear already, The Forgotten City is not an action game and neither does it harbour ambitions to be one. That said, there are sections in the game where you are required to engage in combat in with certain, shall we say ‘enemies’, and it’s here that once more, the somewhat aged inherent DNA of The Forgotten City’s Skyrim mod beginnings come to the fore, resulting in combat that hardly feels especially palpable or satisfying. 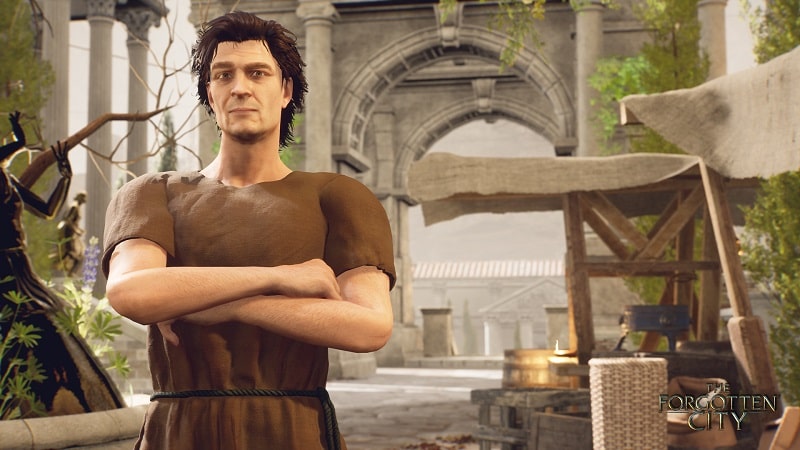 Regardless, combat is such a small part of what is a toweringly clever and intricately crafted adventure that it feels churlish to drive the point home too harshly, especially in light of the raw and fulfilled ambition on display here. Representing a mammoth achievement for such a small team of determined developers, The Forgotten City is a smartly made sleuthing adventure that is more than the sum of its parts.

Effortlessly weaving an intoxicating tapestry of Groundhog Day whodunnit shenanigans with a narrative that deftly wields lofty socio-religious, political and mythical concepts with resounding confidence, The Forgotten City is easily one of the cleverest and ironically, memorable games of the year.

Utterly absorbing and rarely anything less than completely fascinating, The Forgotten City is an intoxicating microcosm of Ancient Roman society embedded in a dialogue heavy adventure and wrapped around one of the most smartly designed mysteries and sleuthing yarns to come along in a good long while. Occasional technical creakiness and issues aside, it's a deeply pleasant irony that The Forgotten City will remain long in your memory after the credits have completed their roll the first, second, third and fourth time.