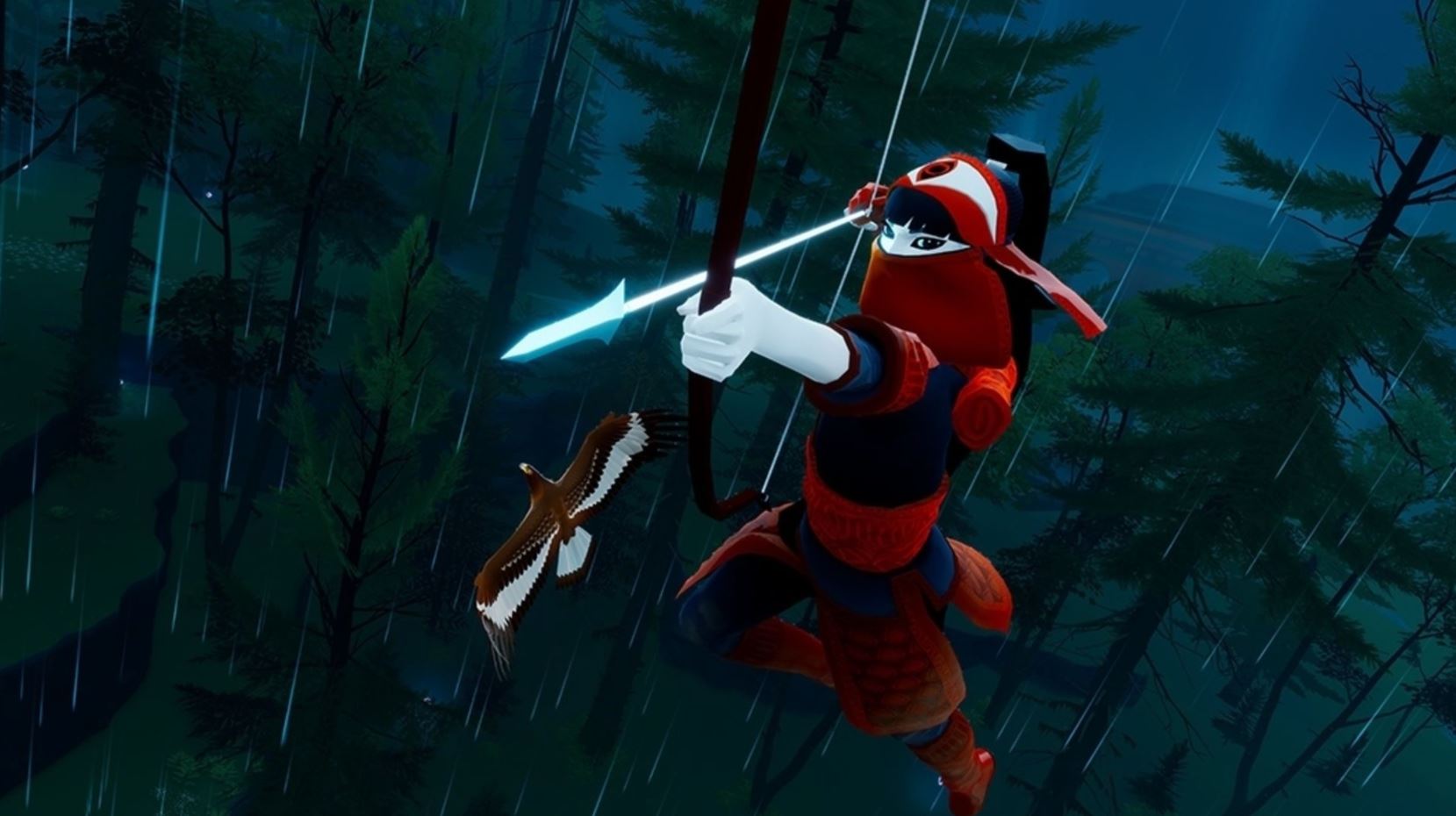 The Pathless PS5 Review – Giant Squid, developers of the ever-popular Abzu have once again dropped something weird and wonderful into our lap. The Pathless, on PlayStation 5 is a gorgeous exploration game dripping with charm, puzzles and tells a hearty tale of the battle against darkness. In a place meant not meant for mortals, you arrive to quench the shade, a terrible curse has draped over the land where man meets spirit and gods run free.

Due to me having already reviewed The Pathless on the PlayStation 4, this review will mostly be about the PlayStation 5 features and how they are implemented in the next-generation update to this charming little title. If you want to read the full PlayStation 4 review for a fuller look at The Pathless, you can do here.

Activating and downloading the PlayStation 5 version of the Pathless was easy, I just downloaded the game from my library on the PS5 and nothing else was required. Some games have you downloading both the PS4 and PS5 versions or needing extra steps needed to get the updated next-gen version running on PS5 but none of that is relevant here. I clicked, download, and I had the PS5 version installed, easy peasy.

Save wise, I could not find a way to carry on my save that I had from my PS4. I uploaded it to the cloud, tried starting the game in case there was some sort of transfer process but nothing. I have reached out to both the developer and publisher on Twitter and they have said the feature is in the works but it may take a while due to Sony’s tech for the feature taking some time to get going. I suppose a fresh start is required and with the separate trophy list, I suppose it’s not too bad.

Faster, Cleaner And With More Feeling

The solid-state drive is a much-touted part of the PlayStation 5, but how much does it affect The Pathless? Well, quite a bit actually, I even dragged out the old PS4 Pro to do a few comparisons for you lucky people. From clicking the game tile to hitting the menu screen takes 30.58 seconds on the Pro and 18.5 seconds on the PS5, not far off half the time. No room for checking your Twitter or making a brew now!

From the menu to gameplay takes 7 seconds on the Pro and 4 seconds on the PS5. It’s not too shabby either way but a nice boost to load times is never frowned upon. All in all, the SSD does shave a nice chunk of time off the PS5 version but the Pathless was already quite good in this department anyway, so it is by no means a game-changing feature. Time is money though so any wiggle-room will be happily accepted.

The Dualsense is where you will get the biggest improvement for The Pathless. The haptic feedback and adaptive triggers are game-changing features. The Pathless was a great experience anyway but now it is heightened by the amazing new qualities of PlayStation’s new controller.

The right side of your controller will have a subtle vibration when you jump, the left side will slightly vibrate when you let loose an arrow and you can feel every bow draw on the adaptive triggers. It’s a few small things in theory, but they add so much to the overall experience.

Graphically, while The Pathless was already a beautiful game It looks stunning on the PlayStation 5. It looks sharper, more refined and the colours just pop off the screen. You would have to see them side by side to see it but it is there, it’s very subtle. It just shows how much of a good job was done on the PS4 version, visually they look very similar but overall, the PS5 version is a tad prettier on the eye and feels smoother and it runs like butter on Sony’s next-gen monster.

From an audio standpoint, again, The Pathless had good audio before but I did notice a richer, more refined audio experience on the PlayStation 5. Rather than the audio coming out of the headphones I was using, it sounded a lot more like I was in the middle of the world, atmosphere, and environment. Audio work is a strange beast but I have noticed quite a step up playing PlayStation 5 games and The Pathless is no different.

The Dualsense Is The Star Of The Show

So, The Pathless was already a great game, in fact, we gave it a 9 our PlayStation 4 review. With the PlayStation 5 version, it loads quicker, runs better, looks more refined and has the added immersion of the Dualsense features. While the PS5 version may not be leaps and bounds ahead of the PS4 version, what has been added does give it a different feeling and an overall, a slightly more pleasurable experience.

The Pathless is available now on PS5.

A subtle, immersive upgrade to an already brilliant game. The Dualsense really shines in making your traversal and combat feel more alive. The game runs brilliantly, looks beautiful, and has a great score to match. You cannot go far wrong with The Pathless, no matter what version you play.