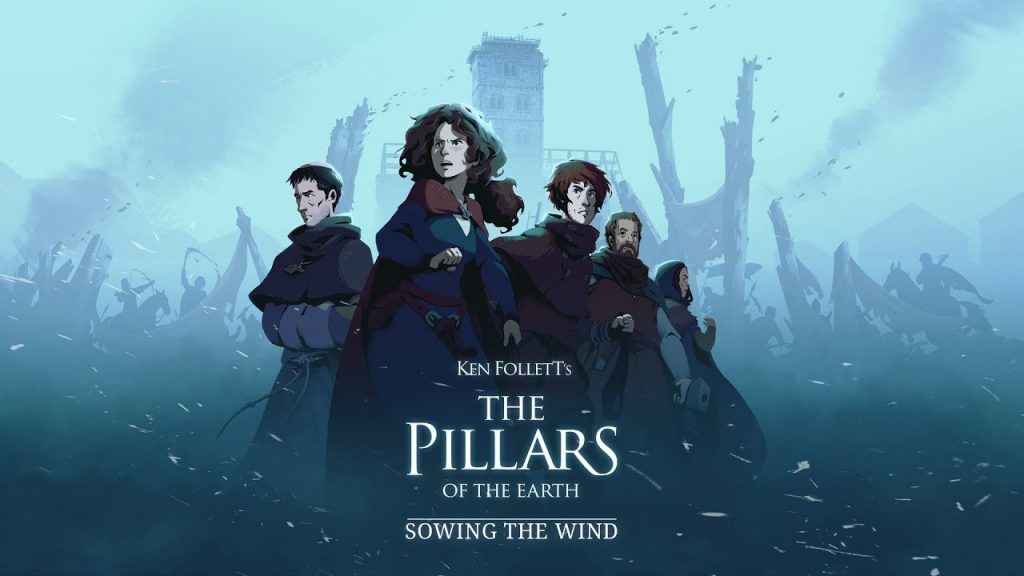 The Pillars of the Earth Book Two review code provided by the publisher.

In no uncertain terms, The Pillars of the Earth Book Two is not just a grand continuation of the events set out in the previous episode of Daedalic’s ambitious adaptation of Ken Follett’s hugely popular novel, it also might just be the single best episode in any point and click adventure series to date on PS4.

The Pillars of the Earth Book Two Review – A stellar continuation

Kicking off immediately after the events of the first episode, Book Two puts players in control of displaced noble siblings Aliena and Richard who, after the imprisonment of their father, find themselves under the cruel yoke of foul nobleman William Hamleigh who has taken both their lands and their freedom. After a distinctly Richard and Aliena heavy first few acts, Book Two segues back into Tom Builder’s story as the rugged craftsman attempts to complete Kingsbridge Cathedral with the help of his now grown-up son Alfred and also Jack, the wildly wayward son of his mysterious new love, Ellen.

Tantalizingly, not only does this episode also follow through on its promise to intersect the narratives of the main characters, it also progresses the overarching plot extremely far forward with many of the characters going through wholesale changes to their situation, personality or both (which for the sake of abject spoilerage for those who haven’t read the book I won’t go into detail here); needless to say, a lot happens in this episode to say the least.

As was the case with the first installment, The Pillars of the Earth Book Two reaffirms itself as a distinctively more ponderous and talkative affair when compared to its peers in the genre, as long, well-written conversations and dialogue heavy encounters are ably embellished by the fine performances of the voice cast. Indeed, The Pillars of the Earth Book Two also reminds players that it does not possess the penchant for action cinematography that Telltale Games have had of late, instead preferring to focus on a far slower pace that results in a much more enriched and thoughtful yarn quite unlike the QTE obsessed shenanigans of its genre counterparts.

Crucially, The Pillars of the Earth Book Two also makes you think, too. For example, in one situation you are tasked with selling some wool to a merchant and as such, you’re required to know how sizable your inventory is. Naturally, the only way to accomplish this is to actually count the loads of wool yourself and then present the vendor with your total; the correct amount leading to a decent sale, while the wrong amount results in you getting a poor deal for your goods. Honestly, it’s a refreshing change to actually have to use your brain once in a while, rather than simply following a somewhat numbing narrative rail-track that doesn’t permit any deviation in activity or player agency.

Speaking of player agency, developers Daedalic Entertainment have also reinforced the importance of decision making too, as it is entirely possible to miss out entire chunks of the story by making the wrong decision while the chapter summary serves to neatly remind you of your decisions and their consequences. Quite unlike efforts of a similar ilk then, just about every decision in Pillars of the Earth actually carries some semblance of weight and consequence in what should be the status quo for any point and click adventure worth its salt.

In continuing the tradition established by Book One, The Pillars of the Earth Book Two is an absolutely stunning looking effort. Boasting some of the most lovingly detailed art ever seen in a point and click title, the beautifully hand drawn, watercolor esque art wonderfully evokes the romanticism of rural England in a way that no other title has managed. Certainly to this end, the effect that the art has is so poignant that it actually makes you want to put the controller down and go outside and seek out similar locations in the real world. Quite literally, every screen is a work of art and in being so, Book Two reaffirms the notion that Pillars of the Earth is arguably one of the most handsomely constructed point and click adventures available on PS4.

Pleasingly, as was the case with its inaugural episode, The Pillars of the Earth Book Two provides far more playtime than your average installment in an episodic adventure, with the duration of Book Two clocking in at between four and six hours which also makes it somewhat larger than some full games by comparison. With so much going on, a substantial amount of playtime and boasting the same lofty caliber of writing and art which defined the first episode so emphatically, The Pillars of the Earth Book Two sets up the conclusion of Daedalic’s Ken Follett adaptation with devastating brilliance.

If you missed it last time, you can catch our review of The Pillars of the Earth Book One, here.

The Pillars of the Earth Book Two carries on the great work established by the previous episode, providing a beautifully written narrative, interesting characters and meaningful player choice against the backdrop of some of the most sumptuous locations ever depicted in an adventure game. If you haven't already, now is the time to stop sleeping on The Pillars of the Earth.

The Pillars of the Earth Book Two