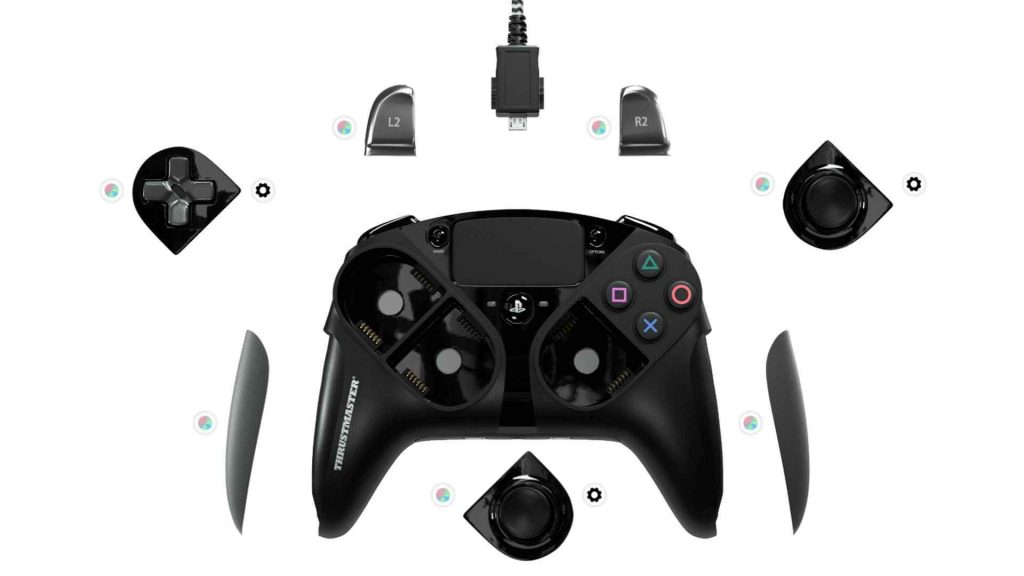 The controller market is growing into quite a competitive one. With Razer and SCUF already showcasing their own products, Thrustmaster has entered the ring, featuring the eSwap Pro Controller. Much like the aforementioned controllers, the eSwap has its own unique features. Do they help it stand out among the rest of the market?

The most appealing feature of the eSwap comes with changing out different parts of the controller. Granted, if you want to change colors of certain things, you’ll have to pay a little more for different T-Mod Color Packs, but that option remains available. The Joysticks and D-Pad all freely slide out and stay in place via magnets between the contact points. I find myself from time to time just fidgeting with a Joystick, taking it out and putting it back in again.

Swapping out parts is pure joy

This feature also expands the potential buyers. Not only can you swap out different colors for each slot, but the Left Joystick and D-Pad can be interchanged as well. This allows fans of offset joysticks to play PS4 more enjoyably. Or, if you’re like me, it allows you to just change the colors around just because you like it.

One aspect of this controller that surprised me the most were the Joysticks, because they are adaptive pieces that can be taken out. I never question Thrustmaster’s quality, but I still had an inkling of doubt that the Joysticks would have some sort of limitation to them in order to compensate for convenience. Was I pleasantly surprised. These Joysticks offer zero resistance when pushing them, and they never delay in returning to rest position (with basically no reverberation when doing so).

What makes a good controller

This brings me to my final point. This isn’t something I’ve ever really had to put into words before. At the same time, I always expect it. If I can forget that I’m holding a controller, then that controller is doing its job.

Two controllers have done this for me. Those are the Dualshock 4, and the other is the Thrustmaster eSwap. Another factor to consider is that my hands are slightly below average in length, sitting 0.6 inches below the average 7.6-inch male hand size. My experiences with other high-end controllers have asked me to regularly adjust my grip to compensate for button positioning, especially with the trigger buttons.

I never had this problem with the eSwap. All my fingers reached exactly where they needed to, including the four customizable buttons on the back, which rested perfectly under my middle and ring fingers. The framework looks very similar to the Xbox’s S Controller, but it feels like a Dualshock 4. While aesthetics are great and all, the feel of a controller takes precedence for me, and the eSwap takes the cake.

To add to this, having the ability to adjust the controller’s settings, via the provided Thrustswapper software, makes this controller almost feel like it was meant for your hands. You want the joysticks to have a little bit of dead zone with higher sensitivity? Do it. You want one trigger to be much more sensitive than the other? Cool beans, you can do it.

One aspect of the controller did take a bit to acclimate to. Being used to the DualShock 4 triggers, I had to get used to pulling a bit harder on the eSwap’s triggers. They do not resist your pulling, but they do require a bit of extra effort. Couple that with them slightly protruding further than DS4’s triggers as well.

This combination makes the extra effort noticeable for a little while, especially so if you play shooters. At the same time, these triggers create that sensation of actually pulling triggers, without having hair-trigger sensitivity. I found myself picking my shots more often rather than unloading all the time. It was initially an oddity that soon disciplined my gameplay to be less sloppy.

On the bottom of the controller are buttons for different button layout profiles and a mute button (one button on each side of the headphone jack). These buttons sit in a rather convenient location while staying out of the way. However–and this won’t be a problem for everyone–when I set my controller down, I tend to grab it from the front with my hand opened across the center. This left me quite often pressing one of those buttons, especially since I play with my headset wired into the controller.

One other downside to the eSwap is one that may not affect everyone. With the power cord connecting where the Light Bar would normally be, there is no room for the Light Bar to exist on this controller at all. This means you’ll have to reach for the DualShock 4 if you play a game that needs it. If you’re like me, you also miss out on navigating the on-screen keyboard with the Light Bar.

While this controller feels so good to use, the wired aspect will keep this from being my exclusive controller. At the same time, the DualShock 4 is a tough act to follow. So, to me, this doesn’t really stand as a negative. It just means I have really good options now.

Right out of the box, the controller’s vibration function felt almost nonexistent. There were times while playing when I had expected the controller to respond to something going on, but I felt nothing. However, I got comfortable with my game enough to pay more attention to the controller, and I began to feel very, very subtle vibrations as they happened.

As I played other games, I learned that each one provided a different level of vibration intensity without my changing the controller’s settings in the provided Thrustmapper software. I also spent some time adjusting the vibration intensity on each side, and I learned that the left and right side do not vibrate in the same way. While they feel like the intensities are the same, they just have different feels on both sides. The right side feels like vibrations in a small space while the right side comes across like vibrations in a wider space.

When activated together, though, vibration feels clean and synchronized somehow. It’s odd, knowing that they vibrate at different intensities. Either way, the end result is what matters, and the two slightly varied vibrations do not feel varied when both are activated. I can’t think of a game that uses divided vibration, so most will not experience this divide, but I mention it strictly for transparency.

All in all, the Thrustmaster eSwap Pro Controller impresses with its sleek design, feel, customizability, and pure function. A few things make it a bit finicky to work with, but nothing keeps it from becoming that go-to controller.

The Thrustmaster eSwap Pro Controller has deep customizability, fantastic feel, and streamlined construction. A few oddities keep it from replacing the DualShock 4 outright, but it makes a strong case on all fronts.