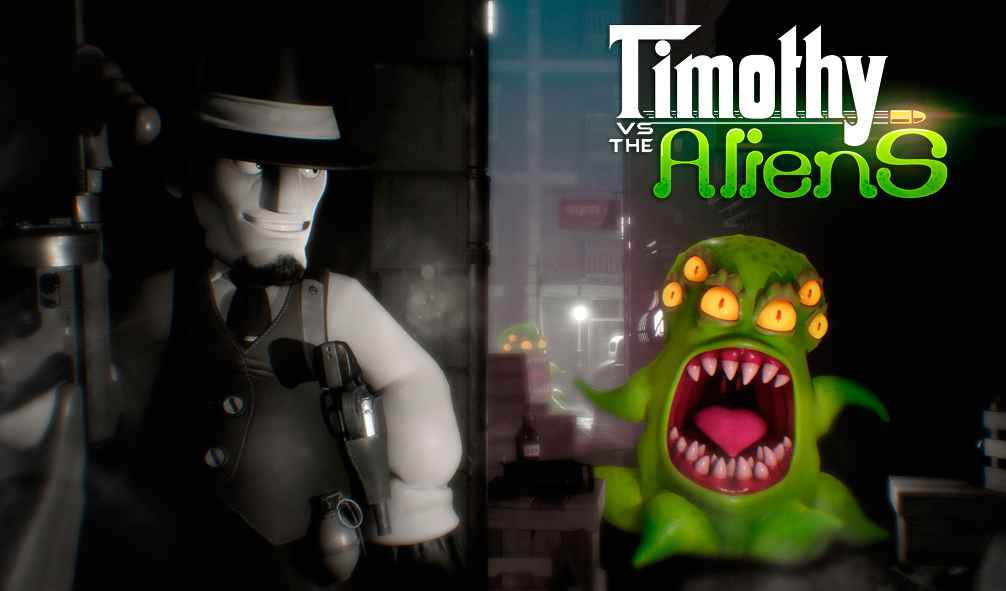 Timothy vs the Aliens review code provided by the publisher.

Have you seen Timothy vs the Aliens? Have you? No? Then it's time to take a few moments to look at the screenshots (and video) that adorn this review further down the page. Looks pretty great doesn't it – the whole monochrome noir aesthetic that it boasts, a callback to the black and white James Cagney mobster epics of old, is both stylish and eminently eye-catching. Where Timothy vs the Aliens, a third-person shooter platforming adventure, doesn't fare quite so well however is in how it embraces many of the outdated tenets that the genre has since left behind.

Timothy vs the Aliens review: An attractive but disappointing adventure

As the titular Timothy, a grubby street urchin turned power hungry mobster who just so happens to have brokered a deal with some aliens to ensure his meteoric rise, players are tasked with halting the earthly invasion of said extraterrestrials by sneaking inside their mothership and vanquishing the big bad that lay within. In practical terms, this means you end up roaming around Timothy's city, completing missions, killing some smaller alien minions and collecting money to pay for upgraded weapons. So far, so genre template then.

And really, that's the problem with Timothy vs the Aliens; it simply feels like an effort spawned from a bygone era rather than a title that has been crafted with the knowledge of all the advancements that have been made in the action adventure genre. First off, the platforming in Timothy vs the Aliens just feels off and nowhere is this more obvious than in how Timothy interacts with the environment around him.

You see, there are very few types of ledges in Timothy vs the Aliens where it seems like you can pull yourself up and over, and should you try to traverse any other type of ledge ol' Timothy just inelegantly bounces off; not the look you want in a platformer of any description. The frustrating awkwardness of Timothy vs the Aliens platforming extends to other areas of its troubled design, too. Indeed, jumps that you look like you could easily make you end up not making because of some invisible wall that prevents you from succeeding, and in doing so, it invokes memories of the platformers of yesteryear where such artificial constructs were prevalent throughout and existed solely to infuriate the player.

If the player execution of Timothy's platforming beats feel dated and distinctly unpolished, than so too does the worldly design that surrounds it, with instant death water being a thing here and conveniently placed boxes to help you reach higher ledges all being hallmarks of a now much improved subgenre of platforming games that I thought had died in the early 2000s.

Elsewhere, the ability to traverse across Timothy vs the Aliens city exists in the form of the various cars that you nab, assuming you have the keys to do so. Once sat in the car however, matters do not improve, as the mini map inexplicably disappears making it difficult to know where you should be going next (without having to get out of the car and open up the separate map screen each time), while a complete lack of physics modelling means that when you collide with something, you don't knock it out of the way; you just grind to an ungraceful stop.

Somewhat disappointingly, the shooting side of things in Timothy vs the Aliens doesn't fare a whole lot better than the rest of the game, either. First off, there just isn't a whole lot of variety in the various alien folk you'll end up blasting; with just four different types of foe (excluding the final boss), combat in Timothy vs the Aliens gets very boring, very quickly. Furthermore, a slow-motion ability which can be recharged by killing these aliens makes their meagre challenge even more trivial, while new weapons can be bought from a sewer bound vendor, but really, outside of the Tommy Gun you can easily go through the game without using any other firearms, making the inclusion of other weapons superfluous to say the least.

Away from the marriage of platforming and shooting that serves as the bread and butter of Timothy vs the Aliens, you'll be spending a fair chunk of time completing side quests for various individuals, even if those side quests don't make a whole lot of sense. One guy for example, promises to provide you the key for a labyrinth if you help gather up all the stolen hotdogs from his cart which have since been inexplicably scattered all over the city. Then again though, this is a game about aliens showing up in a 1920s noir town, so I digress. Such missions would invariably be more entertaining if the standard of writing was up to scratch too, but alas, the writing is pretty terrible too; stunted and disjointed at best and downright nonsensical at worst.

In the end, Timothy vs the Aliens stands as a textbook definition of missed opportunity. Though the frankly stunning aesthetic provides an immediate hook to the player, the poorly thought out platforming, shooting and narrative all conspire to make Timothy vs the Aliens a distinctly no-frills and overly brief affair that is ostensibly better suited for kids than older folk who are seeking a more substantial challenge.

Did you enjoy this Timothy vs the Aliens review? Why not check out our game page for the game, here.

Timothy vs the Aliens is a sub-mediocre platformer shooter whose own tragedy is that, for anyone except for the youngsters, nothing of any real substance lurks under its frequently formidable and beguiling veneer.

Timothy vs the Aliens