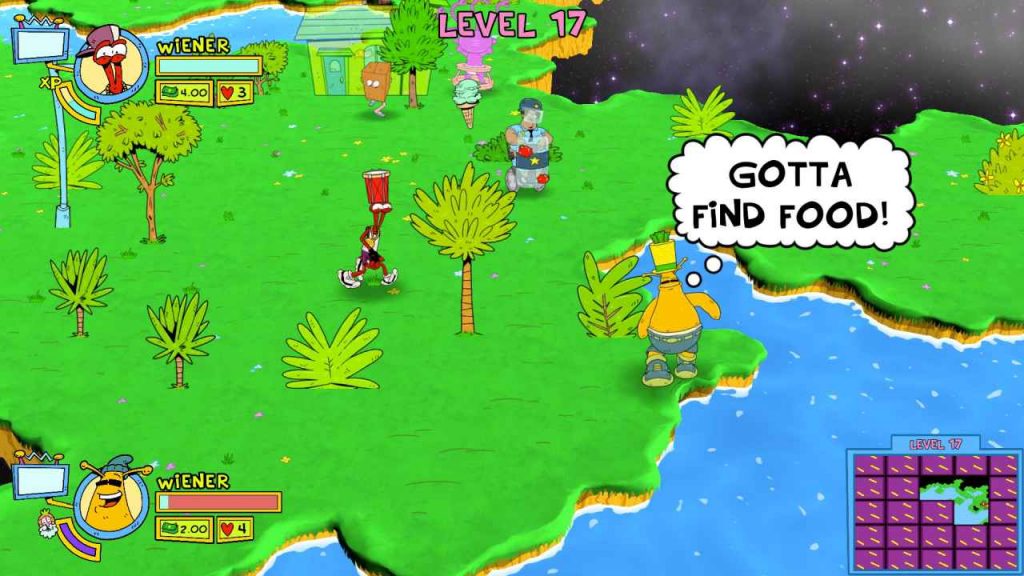 Crank up the megawatt speakers as ToeJam, Earl and their crew of alien rappers are back for some interstellar shenanigans in ToeJam & Earl: Back in the Groove for PS4. Marking the return of the colorful duo after an incredibly long 17-year hiatus, it’s time to feel the funk once more and discover if this original SEGA Megadrive/Genesis classic has stood the test of time.

Having spent a lot of time playing the original game when I was just sweet sixteen, it’s fair to say that my first hour or so with the new ToeJam and Earl was seen entirely through rose-tinted spectacles. While the funky soundtrack is just as toe-tapping as I remember, the cast of familiar characters and the core game mechanics that made it so memorable back in the day are instantly familiar and reassuring.

Wiping those nostalgic tears away, however, ToeJam and Earl: Back in the Groove proves to be much more than a quick blast to the past to stir up some fond memories. So, let’s have a recap first about what the game is all about.

ToeJam & Earl: Back in the Groove Gameplay

Playing either solo, in two-player co-op mode, or four-player online mode, you choose from a roster of nine characters which includes ToeJam and Earl (complete with new character and retro designs), as well as Latisha and Lewanda. Backed by a stellar funk soundtrack, the aim of the game is collect all 10 pieces of the broken rapmaster rocketship across a series of floating islands and blast off back into space.

Each island represents a level, and you move around peeling away hidden parts of the map as you hunt for either a rocketship part, or an elevator which takes you up to the next level. You keep moving through up to 25 levels, searching for the pieces, until you’ve found all 10 pieces and the mission is complete.

Each character comes with a host of stats with points assigned to the likes of Speed, Luck and Inventory, and you earn EXP as you progress by carrying out various actions.

On each island, there’s presents, food and cash to collect, as well as objects to interact with, and enemies and allies to aid you or create obstacles to prevent you from achieving your mission. Indeed, what starts off as a game of simple exploration and collecting items soon blossoms into something much more in-depth.

Unwrap Presents That Aid You In Your Adventure

Presents can be good, bad or neutral in terms of whether they are useful for your mission. However, when you pick up a present you often don’t know what is inside. So, you can open it to find out (sometimes resulting in much hilarity), save it for later in the game, or gather enough cash to pay Wiseman (who’s dressed in a carrot suit and found wandering around each level) to tell you what’s inside.

The present mechanic is superb due to the huge range of creative gifts. For example, you may remember the “spring shoes” that allow you jump to hard to reach places, “love letters” that conjure up a mystery present, or the “boombox” which makes enemies (Earthlings) dance for 30 seconds. If you don’t, you’ll soon learn to love the art of opening up presents!

Gifts range from “Gassy Tummy”, which slows you down with frequent bouts of wind, “Icarus wings”, which allow you to fly over gaps to reach other parts of the island, and “Power Skates” which allow you to move around at speed and knock over enemies. In total, there’s over 60 types of gifts that you can receive, so it’s always fun opening them up and using them to help you out in a number of creative ways.

They can also hinder you too! Look out for the likes of the school book which can put you to sleep, the “Here I Am” sign which appears conspicuously above your head and widens the radius in which enemies can see you, or “Total Bummer” which instantly kills you.

In addition, there’s Earthlings that attempt to ruin your mission. On each level, you’ll find a randomly-generated amount of enemies. There’s 58 different enemy types that all come with their own unique look and special skills, and while some you may remember if you played the original, the cast has grown!

Look out for the texting person who isn’t looking where’s she going and will bump into you knocking down your health, the obnoxious tourist whose camera flash will damage you if she takes a snap, and the angry inquisitor who will judge if you’re guilty or not. Found guilty? You’ll drop down a level to stunt your progression.

Familiar faces return with the likes of the Lawn Mower man, who attempts to run you over and knock down your health, the Mole Thief who burrows out of the ground to steal your presents, and those pesky Danger Chickens that shoot eggs at you with a mortar. The variety of enemies is very impressive, each sporting their own unique look, animation and extra-ordinary skills.

Helping you out, you’ll stumble across good characters too. There’s the likes of the Wizard, who will fully heal you free of charge, the Shady Character who lets you swap one of your presents for something random, and the Sushi Chef who will supply you with some health-buffering food for a price. Ghandi Ji, who spreads the love by keeping you safe from Earthlings when you’re near him, also returns, alongside Jetpack Santa who releases a bagful of presents – if you can catch him!

It’s a big reminder to me about what made ToeJam & Earl so popular back in the day, and there’s some inventive new additions, such as the cosplay nerds, who you can spend a buck with to try and boost your luck stat. It’s this combination of humor, creativity and the randomly generated present mechanic that makes ToeJam & Earl still feel as unique as ever.

Progression feels about right, and as you rise up the levels things can get a little tougher with more enemies on each level, but if you’ve been collecting cash and EXP your character grows with the level of challenge, ensuring there’s a nice balance between difficulty and enjoyment.

Then, there’s the mini-games which you find littered around each level. The hyperfunk zone is back with a fun mini-platforming game, where you run through an alternative dimension picking up coins, gifts and XP, while attempting to avoid walls. Additionally, there’s the rhythm matching game where you put a coin into the boom box and need to press specific buttons in time to the funky tunes. The latter feels a little dated now we’ve been spoiled with many great rhythm games over the years, but it’s still a fun diversion from the main action and proves to be a good way to earn cash.

The original co-creator Greg Johnson has injected Back in the Groove with a decent visual upgrade too. There’s redesigns of the main characters alongside the classic designs, whereas the 16-bit graphics now look vividly colorful and defined in 3D.

Bringing the duo crashing into the present day are the excellent two-player local co-op mode and four-player online mode. Having tested out local co-op (with online play unavailable at the time of writing), it’s the most family fun I’ve had with a couch co-op game since Overcooked. On top of that, there’s infinite replayability with random worlds generated, and a Hard World that offers a place where only the best ToeJam and Earl players will fear to tread.

Combine these slick game mechanics and the sheer variety of characters together, and it’s fair to say that ToeJam and Earl: Back in the Groove still offers something quite unique in 2019, which is a testament to just how good the original game was. Despite some occasional juddering frame-rates, and the frustration of a level teeming with too many enemies, the colorful rapping duo have certainly got back in the groove with style.

Toejam & Earl was developed by and published by HumaNature Studios and is available on PC, PS4, Xbox One and Nintendo Switch on March 1, 2019.

Full of fun characters and unique presents to unwrap, the classic Sega Genesis game feels as unique as ever in Back in the Groove, and is well worth a trip back for older fans of the series. Newcomers can also look forward to finding out what made ToeJam & Earl so popular.

Toejam & Earl: Back in the Groove!