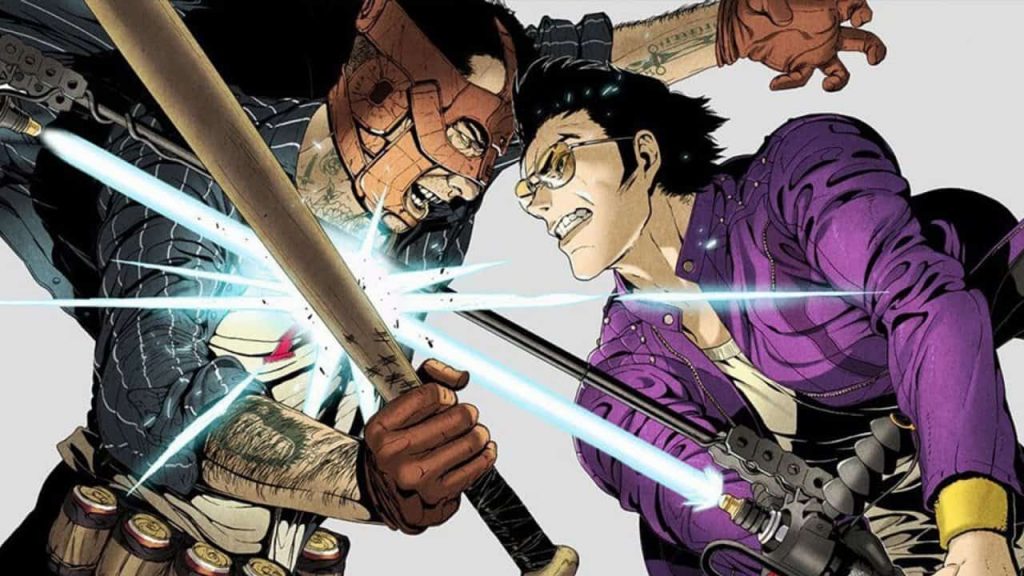 A couple Suda-51 games have stuck with me for a couple generations now. Knowing that Grasshopper Manufacture is willing to port this Nintendo Switch title onto other platforms gives me hope that they will also bring other games to current consoles. However, I can’t say that bringing Travis Strikes Again: No More Heroes over to PS4 first was a better choice than bringing Shadows Of The Damned or Lollipop Chainsaw would have been.

You jump into the sneakers of Travis Touchdown, who, much like the rest of the game, wears his cliches on his sleeve. Travis finds himself in cahoots with Bad Man, his previous adversary, as they are sucked into the Death Drive Mk. II, the newest homicidal video game console. In order to succeed, Travis must traverse different game modes and defeat their bosses. In doing so, more of the game unlocks, allowing Travis to continue further.

If you so wish, you also have the option of playing No More Heroes locally with a friend. Having someone playing with you makes anything better. Unfortunately, this means that online play is not an option. If you don’t have a sibling, spouse, partner, or a Rob the Robot equivalent, then you have to hoof the game alone.

Part of the opening sequence sees Bad Man sneaking into Travis’ camper, looking to end him once and for all. Instead, they end up crossing swords and making fourth wall-breaking wisecracks. I have experience with Suda 51 games, but I had never played the games revolving around Travis Touchdown. Either way, this intro was scripted well enough to catch my interest.

What’s unfortunate about this intro is that the core game doesn’t really match up to the pomp the beginning scenes create. This might be somewhat due to expectations, but my previously-played Suda-51 games were Lollipop Chainsaw and Shadows Of The Damned. They both had issues, but they both did enough to keep me enthralled, the latter especially so. No More Heroes lacks the same kind of intrigue to it, instead relying on cheeky jokes and speaking directly to the audience.

Don’t get me wrong: I occasionally grabbed my side from laughing at random statements. Hell, I even had a little eye-roll chuckle when I first saved the game at a portapotty. However, pacing plays a big part in making jokes like these land strongly. A good example of stellar fourth wall jokes is the Deadpool movies: The jokes are never overdone, and they give just enough of a nudge without drawing too much attention to themselves.

A couple hours into playing No More Heroes, I realized that this game isn’t meant for everyone. Some sequences have 20 to 30 minutes dedicated to text, oftentimes making fun of games that take too long to talk when you could be playing the game instead. These parts are dedicated to building a story, but the common technique is subverting expectations ironically. I can appreciate a good nod to this kind of thing, but I grew tired of it quickly after hours and hours of the same kinds of repeated wisecracks.

No More Heroes plays like a series of top-down mini-games. Some put you on a single path where you simply cut down enemies on your way to the boss. Others have you solve puzzles to continue. The entire games shares a similar camera perspective, and that is where the issues with No More Heroes start to trickle in.

The above point really needs to be kept in mind when jumping into No More Heroes, because plenty of people love games like this. Having an array of different ways to play the same game has its own appeal. Equally so, games like this depend on variety. However, one of the the only variations that No More Heroes offers is in its camera views.

At the same time, this top-down camera view cuts off sections of the left and right sides of the screen. With enemies attacking from every which way and many with projectiles, anticipating attacks becomes nearly impossible. Red neon lights show up on the edge of the game screen to indicate where enemies are when off screen, which is helpful. At the same time, nothing exists to indicate when projectiles come at you until those projectiles are well on their way to hitting you.

Ultimately, the narrative intentions take an immense amount of time to culminate. This means that the gameplay needs to help get the players there. No More Heroes does not do this for a long time, forcing you to use the same Square and Triangle attacks over and over while sprinkling in the occasional skill you learn along the way. Until more skills unlock, combat will feel as repetitive as breathing.

No More Heroes: Travis Must Die is meant for fans

Suda-51 offers up a unique experience with each game he works on. No More Heroes proves that not every experience is good for everyone. On paper, the game looks like a series of mini-games that build up into a cohesive product. While this is true, the product as a whole lacks the kind of polish and foresight to successfully do what it wants to do.

Fan service is all well and good, because fans will get exactly what they want from No More Heroes. At the same time, simplistic and repetitive gameplay with humor of similar variety won’t likely appeal to the uninitiated. No More Heroes requires a certain mindset to fully enjoy it for what it wants to do.

Some jokes land, and some moments shine, but most of No More Heroes: Travis Strikes Again Complete Edition relies on heavy-handed doses of breaking fourth walls and common game modes. There's an audience for this franchise, but this game doesn't offer much for anyone else.