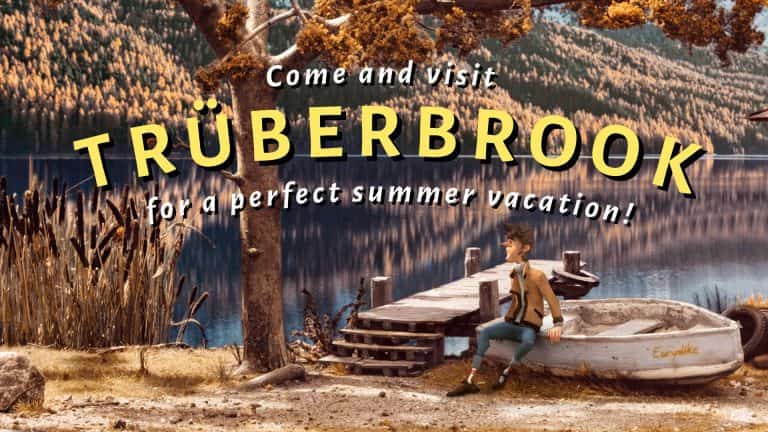 When I first watched the trailer to Trüberbrook, I was immediately intrigued. It looks as if you’re playing an amazingly crafted stop-motion movie with a science-fiction twist. This quiet German town isn’t what it seems as you quickly learn there is something strange lurking behind the scenes. Stories like these have always been my guilty pleasure, so Trüberbrook was right up my ally. Although I ran into a few hiccups here and there, I thoroughly enjoyed my experience with this gem of a game. But enough introduction, let’s really get to the bottom of this mystery.

Trüberbrook was developed by BTF. It is a talented company from Germany comprised of a group of artists from a wide range of backgrounds and disciplines. With the help of Medienboard Berlin-Brandenburg, Headup Games, and a 2017 Kickstarter, BTF has been able to bring Trüberbrook to many platforms, including the PS4. At its core, Trüberbrook is an adventure game. You collect random items to solve intellectual puzzles. There is very little combat, and at times the controls can become sticky. Regardless, Trüberbrook kept me interested with is superb voice acting and amazing visuals.

From the moment you start Trüberbrook, you will be amazed. The way BFT handles lighting, camera angles, movement, and textures are top notch. Multiple times I found myself staring at the screen in amazement. BFT induces feelings of Coraline, Wallace & Gromit, and at times the children’s book series I SPY. All of these are the highest compliment I could give this game. Visually, it’s one of the most unique games I have ever seen.

Each of the seven areas you visit is dramatically different, yet fit the feel of the game. The main town and hotel you spend the majority of your time in has a strong German vibe, while the medical facility you find yourself at has a strong BioShock presence. All of the environments help drive the story forward without main plot points. BFT does this by directing you to ask specific questions or answer questions you already had just with your surroundings.

The town of Trüberbrook feels rundown yet prideful, as if the Town was dying but the residents didn’t want to accept it. The caves feel ancient, but advanced, invoking an Alien or Atlantis like presence. I appreciate games that use environmental storytelling in this way. When the world feels lived in and alive, I become invested at a much quicker rate than I would otherwise.

A mystery that ends as soon as it accelerates **Spoilers**

The story of this game is drip fed to you in the beginning. You are Hans Tannhauser, a Quantum Physicist and winner of a vacation to the quaint town of Trüberbrook but you don’t remember entering the contest in which you won. This is the first sign that the happening of this game are what they appear to be. On the first night, you are awoken to the sounds of a thief rifling through your research papers. This is the start of your journey to find the thief. The story itself is quick. However, it’s slowed by the gameplay. That’s something we get into a bit later.

As you continue your journey to find this thief, some strange things start to happen to you. You meet another scientist named Gretchen, who is all too eager to help you with your journey. As well as a gaggle of weird, yet charming, characters. These characters often do little to advance the story. Although, like in any good adventure game, they will give you an odd item that will come in later unexpectedly to solve a problem.

Throughout your journey, you discover a story about a town that is now slowly dying because of a big corporation that shut down the silver mine soon after it arrived. This mine was the lifeblood of the town and it was cut off virtually overnight. By tracking your thief, you find out why.

Here in these mines, there is a portal to other dimensions, called the Saturn portal. That’s where your thief is waiting for you, along with a small twist. This is the climax of the story and soon to be the end. This is where Trüberbrook missteps. If the ending of the game, or the twist, where more substantial it would make the journey feel earned. However, these two things are so inconsequential that the two endings you can choose from almost feel the same.

One choice has you go with the thief into the portal, and in the other, you stay behind. Both of these paths end with you not sure about what will happen next. And both feel a bit abrupt. The story of Trüberbrook starts out invoking a sense of mystery with a science fiction twist. However, by the end, it feels unfinished. I started this game with the same feeling I had while playing Oxenfree, which is one of my favorite games this generation, yet was left disappointed at the lost potential.

Trüberbrook luckily doesn’t require much controlling. Most of the game has you walking back and forth between the seven areas looking for tools and items to solve problems. Much like any classic point-and-click adventure, you need to interact and pick up as much as you can. Something as innocent as a whistle can come in handy down the road, and most likely will.

The game controls are pretty straightforward but work well for the most part. The left analog stick will allow you to move around the area you’re in. Most areas only require you to move left and right. However, there are a few cases that you will need to ascend stairs or climb ladders. While you control Hans, you use the Right Analog Stick to select and interact with objects. There will be one of four ways to interact with objects: look at, pick up, talk to, and use other objects.

These four interactions are tied to Triangle, Circle, Cross, or Square. Every time I came into contact with something, there was very little confusion on what to do. The challenge was finding the right object for the problem to solve.

The majority of Trüberbrook doesn’t change the formula of classic point-and-click adventure games. However, a very nice addition comes in the form of the L1 button. This allows players to see everything that can be interacted with in any given area. This feature saved me hours of stumbling through levels trying to find obscure solutions to puzzles. Nevertheless, even with solid gameplay mechanics and helpful features, there were still some problems with how the worlds interacted with you.

Because Trüberbrook uses real sets for their backdrops, at times the area becomes hard to traverse. In particular, a staircase leading to the basement. This staircase is obtuse and can only be described at Tim Brutton-esque. Multiple times, I became stuck on the geometry of the stairs and what should have taken me seconds to accomplish turned into minutes. This would have been a problem I overlooked. However, I needed to climb these stairs multiple times in a very short time from trying to solve a puzzle. This became one of the most frustrating parts of the game.

Beauty is only skin deep

BTF put a lot of pride into this game. You can feel the love and artistic support they put in every area you walk into. This feeling is what drove me through the game, and what I enjoyed the most. I was in awe of each level, from the ordinary hotel room to the beautiful view of the lake that leads into the main town. Even the way Hans moves invokes feelings of stop-motion movies. However, the obtuse controls will pull you from the beauty of this world more than can be forgiven. With the anticlimactic story and a world that fights your movements, Trüberbrook sadly misses its mark.

Trüberbrook is out now on PS4.

The story of Trüberbrook has an intriguing concept. However, it is resolved too quickly and lacks an impactful revelation that it was seemingly building to. Nevertheless, the voice acting and visuals alone have left me so impressed they eventually became the reasons I continued through the adventure.