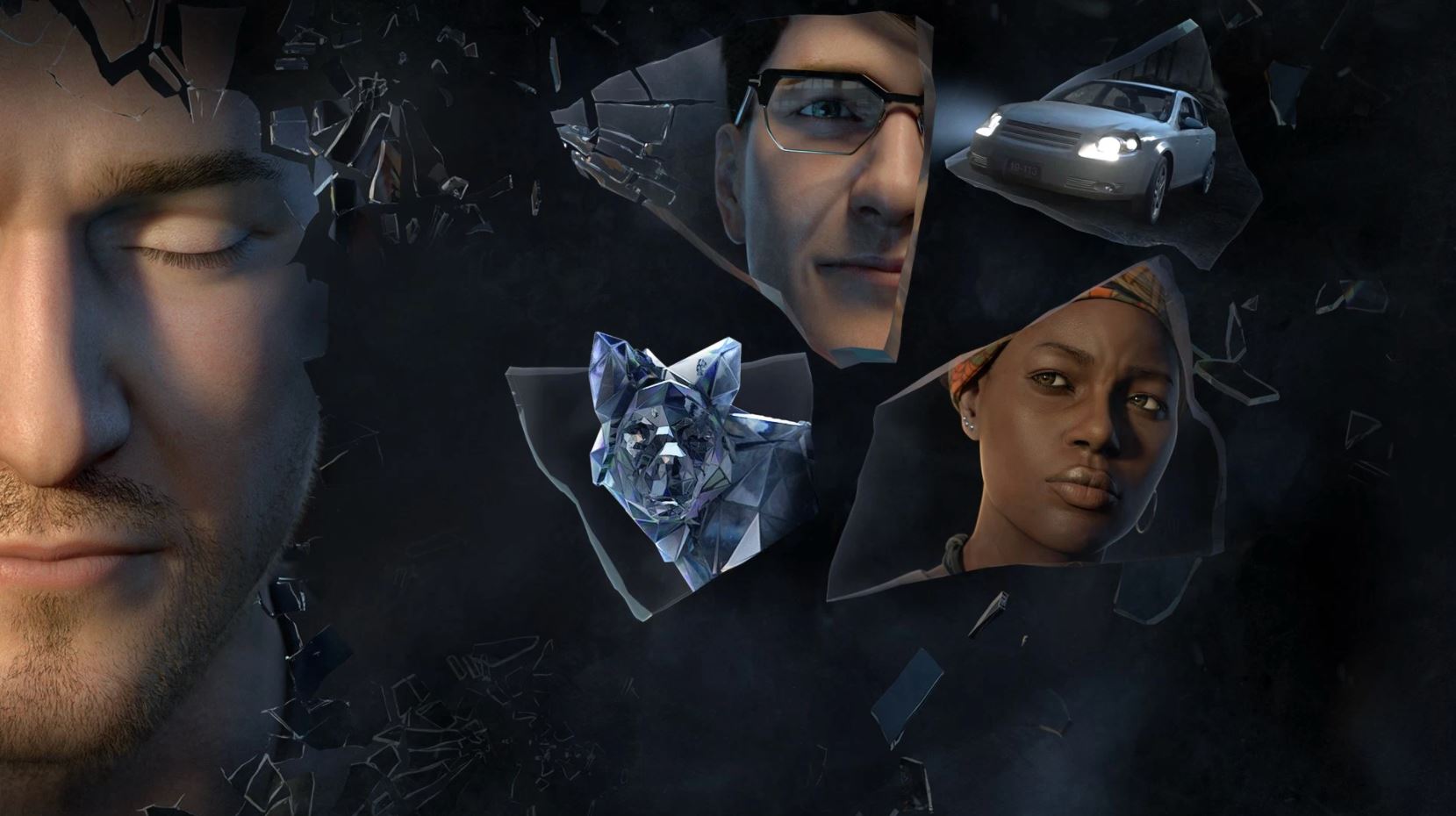 Twin Mirror PS4 Review – I am really sad I have to write about Twin Mirror in the way I am about to in this review. I have long been a fan of Dontnod Entertainment‘s work and think they are one of the most important studios in the industry today telling stories in ways most developers won’t even think about.

But, Twin Mirror doesn’t manage to live up to their pedigree, despite a mysterious narrative that has an amazing third act, as well as growing close to its cast of characters. Introducing a unique Mind Palace detective gameplay mechanic, the game fails to utilise it in interesting ways until the very end of the game and it frustratingly often gets in the way of the great story. Let’s get into why Twin Mirror works and doesn’t work at the same time.

In Twin Mirror you play as Sam Higgs, a former investigative journalist from the town of Basswood, West Virginia who has been gone for two years after leaving town suddenly. You return to your hometown to say a final farewell to your friend, Nick, who has just passed away.

However, after arriving and reuniting with friends and family he has become estranged from, like Nick’s young daughter Joan, your former colleague and partner Anna, and various other faces from the town, you learn that there is more to Nick’s death, the town of Basswood, and the goings-on between different parties and persons in the town. And, as a former investigative journalist, you stay to find out just what is going on.

Whilst solving this mystery, Sam is haunted by a doppelganger of himself inside his head, only referred to in-game as “Him”. This character will feed Sam ideas, thoughts, possible outcomes, suggestions on how he should behave, and everything in-between. But, his arc doesn’t really go anywhere interesting and I found some of the history behind Sam’s doppelganger to be quite forced.

The story overall starts off slow and for the first act, I was not invested in any of the characters or what was happening, due to the sudden way you are thrown into Sam’s life. However, once the mystery and secrets of Basswood begin to show up, I began to find myself enthralled by the story Dontnod was telling and I particularly love the entire final act, which brings the narrative to a satisfying conclusion.

That satisfying conclusion is then upended by an even more satiating twist which makes you rethink all of your actions in the game and in Sam’s life before he left Basswood and whether or not your choices were done for good, without taking in the wider consequences of your actions and how they will affect the people of the town.

Twin Mirror is so good because the ending and your choices are not black or white; everything has an effect on everyone, and when the credits rolled I thought about my choices far more than I did in something like Life Is Strange. This is perhaps due to the small-town setting of the game and the closeness you feel to each of the characters, which is developed in a nice and concise codex, highlighting all the events with each of the characters and allowing you to revisit it at any time.

The Mind Palace Does Not Live Up To Its Potential

As you are an investigative journalist, a lot of your time in Twin Mirror is spent finding clues, piecing parts of a mystery together, and deciphering meaning from things most would look past.

Initially, this deducting is done as Sam in a similar way to how Life Is Strange played: you explore the environment, be it a bar or an office, looking for items related to a mystery. Once you have pulled them together you will then be prompted to enter Sam’s Mind Palace, which is his visual representation of all the information he has gathered.

This gorgeous and glossy space has a number of different scenarios with you choosing options at various points and seeing how they would have played out in the real world, with Sam picturing this in his head.

For example, in the bar I mentioned earlier, you try to picture how a fight started and ended. So, after you have gathered clues from around the bar you are given options such as who was involved, whether the fight went towards the bar stools or the entrance, etc. Upon choosing the right combination of options, which picture what truly happened, the full scenario will play out and Sam will move on with his new evidence.

In theory, this all sounds great but there are some problems with how this works in practice. The initial phase of discovering clues as Sam is impossibly frustrating as you can’t enter the Mind Palace and start to piece the mystery together until you have found every clue. Clues are shown by small popups, similar to how interactable objects are shown in Life Is Strange.

After you find the obvious 5-10 clues, in every situation in the game there was always one or two more hiding around or sneakily hidden. And, with the game not offering any kind of hint system or auto-solve pointing you to the direction of these clues within the playable area, I spent far too much time aimlessly wandering around like a headless chicken, waiting to see a pop-up on the screen which I haven’t seen before.

This was a huge barrier to enjoying the story during these sections, as it felt like I was hitting a brick wall. All I wanted to do was progress the story forward, but instead, I had to find a small scratch on a tree or a car wheel hidden within some bushes.

Once you do find all the clues, you then enter the mind palace and start piecing the puzzle together. Initially, it is fun to see what happened and think to yourself about how a situation played out. But, that veil is lifted when the mechanic turns into “pick option a-d” until the game enters a cutscene and says it is the right combination. There is no repercussions for picking the wrong combination of events and the mechanic falls flat after a while.

There is one moment, which happens at the climax of the game, where this Mind Palace mechanic is used in a live, ongoing situation. You have to think on your feet, see how the situation will play out in your head, and make choices that have an impact on the game, its characters and the events to come.

Here is the moment where I was sold on the Mind Palace mechanic and it was the first time that I properly engaged with it. This sequence is the best gameplay moment in Twin Mirror and it’s a shame it never gets expanded upon further. An entire game built around seeing situations in your head and making decisions, uncertain of what will happen, is a great premise and I am not quite sure why the entire game doesn’t use the Mind Palace mechanic like this.

Visually Unique With Some Issues Alongside It

Twin Mirror most of the time doesn’t look too great. It isn’t bad by any means, but it certainly can look rough due to the more realistic art style of the game, when compared with Life is Strange. It suffers from some glitchiness, like a phone clipping through a hand, some bad pop-in, and poor lip-synching during some key story scenes.

Despite these glitches and small issues, I never had any issues with frame drops and actually found the game to run fairly well.

This solid performance and for how rough the can look at times, the Mind Palace really helps show off some of the beauty here. This glass-pained-world is gorgeous to look at and gives you the feeling of being in an endless space of nothingness, able to explore at your own leisure. Being able to wander this Mind Palace and remember past events or your history in Basswood is great and the visuals really help sell the ethereal feeling I believe Dontnod was going for.

On top of that, there is one story sequence where the Mind Palace is used in a unique way and the clashing of history with present and items from Sam’s past with the glossy glass islands are visually stunning and easily make for the most memorable sequence of the game.

There is some impressive stuff in Twin Mirror, it’s just a shame that the poor parts here bring it down.

An Engrossing, Satisfying Story, Let Down By Poor Gameplay

Twin Mirror doesn’t quite live up to what Dontnod have done previously. 60% of this game is excellent but the other 40% feel like shards of Sam’s Mind Palace crashing into the core of the experience and giving it a disjointed and uneven feeling.

Although it starts off slow, the narrative of Twin Mirror is one of Dontnod’s best and I loved the greyness of the game and your choices. The disappointing Mind Palace really slows this pace down though and its potential is never fully reached and I only hope someone is able to take the idea and run with it by having you make plan decisions and make choices on the fly.

What we have here is a totally fine detective game that plays well and has some great aspects, but occasionally it is let down by a reflection that doesn’t quite live up to its true self.

Twin Mirror is available now on PS4 and playable on PS5 through backwards compatibility.

Twin Mirror has one of Dontnod's most engrossing stories with a conclusion that reflects the moral ambiguity of living in a small community. However, this narrative and its characters are hurt by a frustrating Mind Palace gameplay mechanic that isn't utilised to its full potential until the end of the game. Twin Mirror has its strengths but the game staring back at you through the reflection of the screen isn't always reaching its full potential.