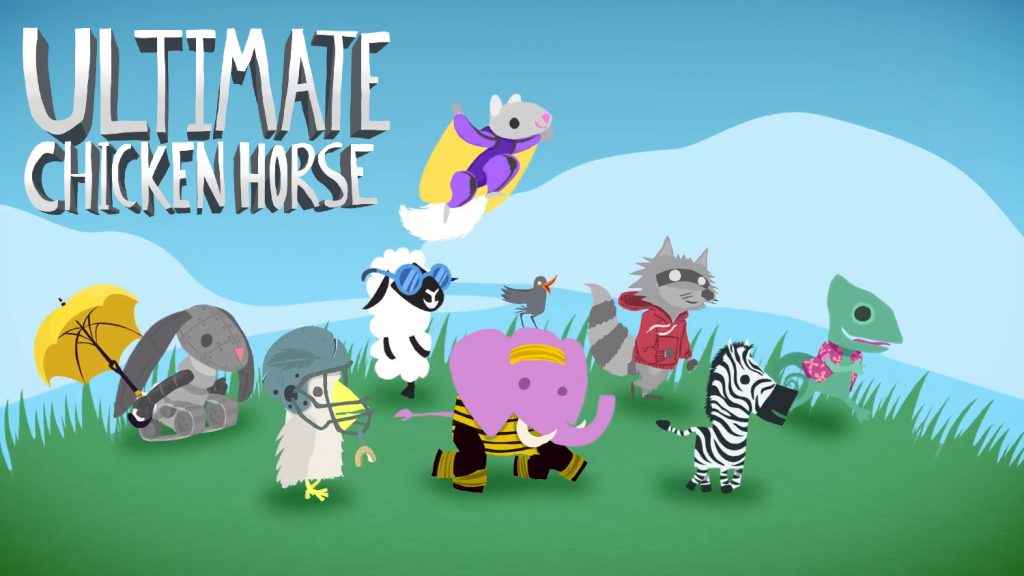 Beginning as a concept in a September 2014 game jam, Clever Endeavour Games launched a successful Kickstarter campaign for Ultimate Chicken Horse in 2015, and released it to great success on Steam in March of 2016.

Just one long year and a half since then, console owners are finally able to join the zany barnyard fun of Ultimate Chicken Horse on PS4, with Nintendo Switch and Xbox One versions following in 2018.

The core gameplay is nearly identical to another famed twitch-platformer, Super Meat Boy, in that players are able to run, jump, sprint, and wall jump their way to victory in every map, running from the start point to the end zone marked by the flag, all while dodging sawblades, crossbow arrows, pitfalls, and other heinous traps.

The twist is that players build the course as they play.

Levels are essentially a blank slate, with only the start and goal points existing initially in levels with varying themes, like an ancient Aztec temple or a cliffside waterfall.

The mode players choose from the main level hub (dubbed the Treehouse) will determine the type of game played.

Creative Mode is the base game mode, wherein players take turns placing whichever piece they want from the inventory, one at a time, and then try to reach the goal to score points (how many points and pretty much every other rule can be changed from a rule board in the Treehouse).

Freeplay Mode is Creative Mode on crack, where all players can place whatever they want at the same time to build either a cohesive level or an impossible nightmare of portals and black holes. This mode can also be done in single player if you are interested in creating your own masterpiece level to challenge players across the world in Challenge Mode.

Challenge Mode locks all levels and only allows players to play on user created levels that are uploaded to the hub in the Treehouse basement.

These levels can be uploaded from Freeplay mode after you’ve made them, either by yourself or done with friends or players online.

While each mode has its charms and will appeal to different players, the best mode in my opinion, and the one I highly advocate in this Ultimate Chicken Horse review, is Party Mode.

A Party Box is shaken at the beginning of every round, and players can pick from a handful of random items or traps to build the course, with each single piece placed at once by all players. You then try to reach the goal like every other mode. Whether the goal is reached or not, and points are awarded or not, the Party Box is shaken up again and a new batch of random pieces is revealed.

Players have to be quick if they want to grab the piece they want before someone else does. The complex gauntlet of traps and various platforms that can be built here quickly leads to a sometimes staggering challenge, which becomes even more impressive when you thread the needle between two moving traps perfectly to snag a coin for bonus points and snatch victory from the claws (or hooves) of your opponents.

This mode has already led me to many hours of hilarity, rage, shock, and revenge, which I could easily illustrate with a handy dialogue emote like those found in many MMO’s, albeit a stripped down version.

Watching a friend fall to a platform, only to be perfectly gutshot in midair by a hockey puck had me nearly falling out of my chair in a fit of laughter. Having the same arrow turn myself and another player online into a raccoon-horse shish kabob became the highlight of the night. These moments and many others like them were had in Party Mode. There’s something about the randomness of it all, and relying on the courtesy of others not to screw everyone over, and then watching them lay that spike trap to do exactly that, is where the magic of this game comes from. I can’t recommend it enough for anyone that is looking for a multiplayer party game with which to troll your friends (or random online players).

That is not to say it isn’t without its problems though. The first time you play the game, you may not be exactly sure where to go or what to even do. There is no guide, no instructions, and selecting a mode by yourself and then jumping on a platform may not do anything. I started in Creative Mode and couldn’t figure out why the level I was standing on wasn’t opening. It turns out you have to have more than one player to play it, but going in blind there is nothing to tell you that Freeplay is the only mode that can be done single player to make levels. There really is no sort of tutorial on how everything works, and trying to build a level by yourself is akin to putting together an IKEA PAX Wardrobe without the instructions (okay maybe not THAT difficult).

The single player campaign mode was scrapped midway through development to focus on the other aspects of the game, which is fine unless you are aiming to be the next Team Meat and create the most challenging levels to play, as there really is nothing here for single player. I recommend just jumping right into online play and finding a Party Mode server to play on. You’ll learn quickly what each piece does and how to build things together to create challenging scenarios and levels.

There is a couch co-op mode accessible from single player that allows you to share a single controller and play Creative Mode. This option is very nice for players to enjoy the base game with a friend or sibling if you only have one controller to use.

Players can pick from one of four different animals, a raccoon, a lamb, and of course the game namesakes, a horse and chicken. Other characters, costumes, and levels can be unlocked by selecting a level with the question mark over it, indicating a collectible can be found within, and grabbing the cardboard box held aloft by balloons during play. This of course requires players to build a path so the surprise box is reachable, sometimes at the cost of reaching the goal that round.

The graphics are simple 2D and irrefutably adorable, running the gamut between complex and multi-layered animations and nearly cardboard cutout level assets, everything is well drawn in its simple presentation and even in the fast paced panic of dodging twenty traps there shouldn’t be confusion as to what may have led to your demise.

The soundtrack is truly something special. Always upbeat and jazzy, even in the darker and more perilous levels the music will always get you pumped and ready to laugh at every horrible death and cheer at every underdog comeback. The best part is without a doubt the voicing done for the animals. Each character has its own cute gibberish it spouts while it dances, jumps, and dies. Listening to the horse let out a hearty whinny while it leaps from a wall or hearing the chicken’s somber “buckaaawww” as it falls into the void leaves me giggling every time.

As with any online game, it will sometimes take multiple tries to get into a lobby, but you can always host your own as well. Lag can also be an issue, as sometimes I died due to a split-second frame rate drop and missed that all important wall jump timing. You will sometimes see other players appear to phase into objects or miss traps completely, though from their perspective they are right on the money with their timing. Just be aware you’re probably appearing the same to them.

Ultimate Chicken Horse really is a special game, and one of those rare indie multiplayer games that catches lightning in a bottle and will leave you wanting to come back again and again for a good laugh after a stressful day. Just don't try going into single player until you've been online a few times to learn the ropes.