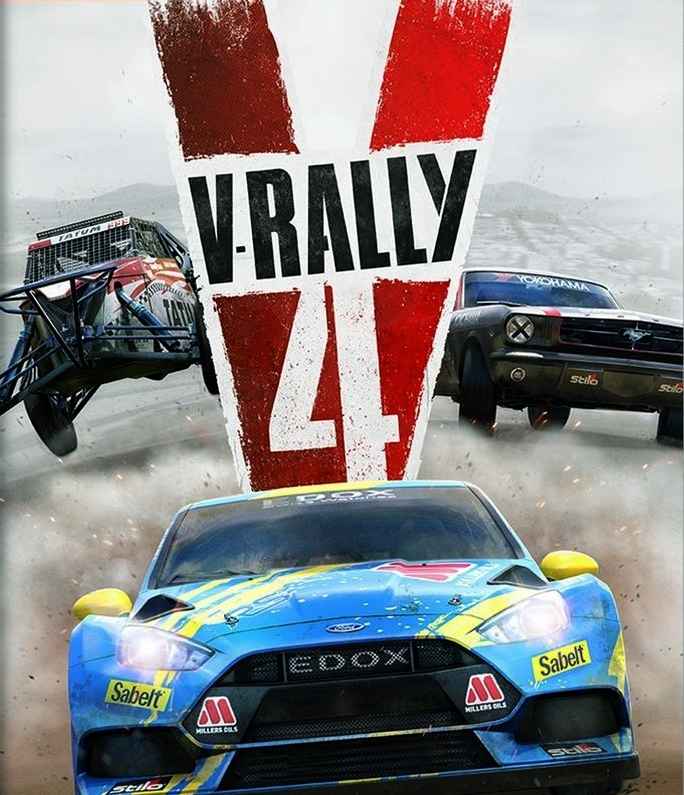 V-Rally 4 is the newest installment of the V-Rally series, marking a surprising return to gaming.

With nearly sixteen years since V-Rally 3, and more than twenty since the first V-Rally on the PlayStation, V-Rally 4 has a lot to live up to in reputation.

Long thought dead, Infogrames’ original rallying gem changed hands and publishers over the years, and was finally picked up by Kylotonn of WRC fame.

In their capable hands, V-Rally 4 emerges as a true successor to the V-Rally series, but with some rough edges.

Graphics look good, but not next-gen. Hell it’s not even current-gen.

Display and resolution look like PS3 era, there is major artifacting around edges that make the details look pixilated and the entire game feel stuck in a limbo between PS3 and PS4 hardware.

It is a shame because care was obviously taken in the construction of the levels, lighting, and presentation. Monument Valley is gorgeous to race through in a Mini-Cooper. Lighting and coloring authenticity are all on point, but it only looks good if you’re driving too fast to notice. Driving itself is fun and extremely challenging, often to a point of frustration.

V-Rally doesn’t have any tutorial mode per se, just the initial voice acting agent that introduces herself, and prompts that guide you in your first race.

This means that actually learning how to rally is earned the hard way. It takes a great deal of skill and practice to eventually learn all the drifting, hand braking, and steering finesse that you need to know in order to take those sharp turns, drift through hairpins, and NOT crash your car. (We don’t want to pay for those damages, now do we?)

It will be frustrating, and each car will also feel different and handle different, meaning you will end up learning how to use the hand brake very well if you ever want to make it in the Rally biz. Thankfully there is a no pressure tutorial map with an airfield you can practice in, or even test drive new cars you want to purchase in the career mode. (Now wouldn’t THAT be awesome? Who in their right mind would let you rally the hell out of a car you’re about to buy?)

The career mode, called V-Rally mode, is one we’ve all seen before. You race in matches to earn money to pay for cars and mechanics and upgrades and engineers and you’ve seen all this before.

Get good, win races, and pay your bills. If you suck, practice until you get better.

I mean it in the best way possible, but there is a huge difficulty curve that newcomers will have to surmount if they want to make it in the career mode. It may not be fun, and it will definitely turn away gamers that are looking for more of an arcade racer. The good news is V-Rally 4 has that angle covered as well, as Quick Match mode makes its return.

This mode allows you to quickly select which type of races and cars you want to use, like any good arcade racer. This is another perfect opportunity to practice driving the different events, tracks, cars, and weather conditions to get better in career mode.

This does include multiplayer as well, so get out there and enjoy some classic arcade rallying with strangers that you just might have been missing over the years. If you’re looking for authentic rally gaming, V-Rally has you covered there too. The different modes of racing offered allow fans to participate in the exact events they may follow, such as the Hill Climb or the Extreme-Khana, which sound like things I’d read about on Urban Dictionary.

The Rally mode is the standard mode, and my personal favorite because of the co-driver that calls out turns and road conditions ahead. It made the experience feel authentic, and anybody who doesn’t know what a right-four long or a square left into right-five short is soon will, and it will make sense.

The soundtrack and sound effects are all well and good, though hearing the same song in the career mode menus over and over made me hate the song, and I now mute the TV until I’m actually racing.

Overall, V-Rally 4 is a decent racing game, and it is a respectable return for the franchise, so fans of both rallying and of the V-Rally series will find something to love. The controls are solid and work well, but perhaps too well. Driving in this game is actually harder than most other racers due to the authenticity to rallying.

A classic PlayStation series returns for another worldwide run. Disappointing graphics and a lackluster (and often annoying) soundtrack detract from an otherwise fun and varied racing game. Fans of the series and fans of professional rallying will feel right at home, and even newcomers can get the hang of drifting with some work.