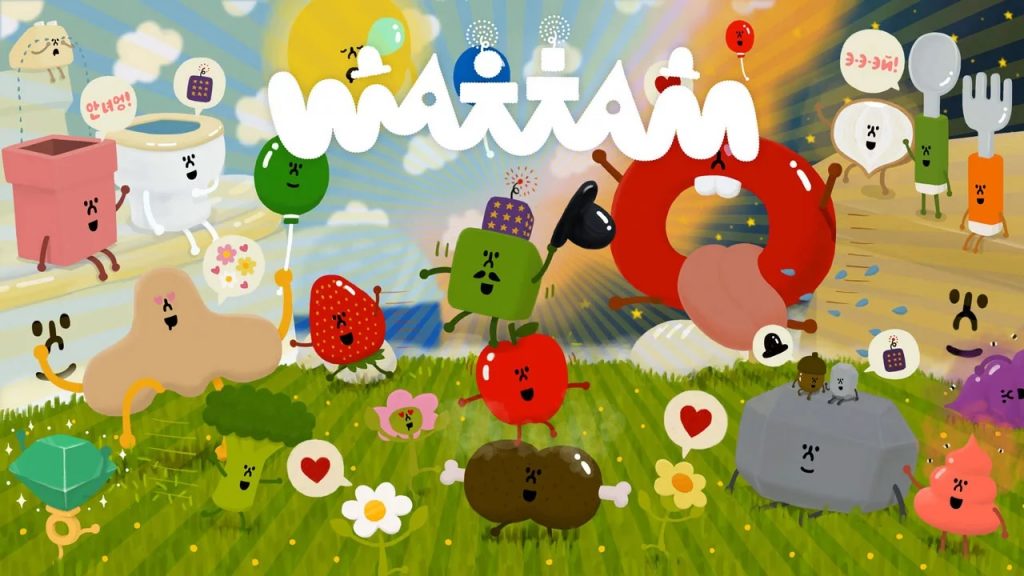 If only life was as simple as holding hands, helping each other with uncomplicated tasks then lovingly blowing each other up into the air in colourful, giddy explosions. Well, in Wattam, it is. This game has to go into the Weirdest Games I Have Ever Played pile and strangely, I enjoyed it. Wattam is developed by Funomena and is dragged out of the mind of Katamari Damacy creator, Keita Takahashi. It’s a game about friendship, eating, pooping and masses of bright eruptions. It’s like nothing I have ever played before and probably, unlike anything you have played either.

Your world was destroyed by an evil force that reveals itself later in the game. It is your job, initially as the mayor to restore the world to how it once was. I say initially because during your time playing Wattam you can be anything and everything you discover. From sushi to toilets and from rulers to snowballs, everything and anything is yours to command. All creatures great and small must be discovered and utilized to progress further into this madcap world.

Initially, I struggled to see what the point of the game was but as I progressed I found it harder and harder to put down, as did my children. You start with a small quest to complete, which spawns more items, new characters to meet and therefore more people to help with their quandaries. The game exponentially grows and you get more involved with each quest you complete. It’s very simple, very bright and even though there is not much depth to Wattam we all found it very addictive. It was very strange.

We found ourselves constantly stating that we had had enough of it but every time a new element was introduced we were fixated on seeing what its purpose was. What was it’s place was in this strange world? Where did it fit into the grand plan? It was mesmerising and we could not work out why. It was extremely entertaining watching these little characters interacting with each other and going about their business. Even when you are not controlling them they roam freely, interacting with each other in playful ways.

You will be solving sushi based crimes as an investigator, finding lost children and even re-creating a massive face from other characters. It’s all very surreal, very unique and completely mad. Just when you think you have seen it all you get a mouth to control that can eat anything and turn it into poop. At one point I left my boys playing, could hear a lot of laughter from the kitchen and I came back to what only can be described as Multicoloured Poop World. It’s completely deranged but also brilliantly novel.

The controls in Wattam are very simple, apart from the camera rotation system which did take us a little while to adjust to. Due to the right analog stick being utilized to select different characters on the playing field, the camera control is left to the R2 and L2 buttons. On several occasions early on I selected a new character when I wanted to rotate the camera. Fortunately, after an hour or so this system became natural and was not an issue after that. It’s certainly strange but not experience ruining in any way.

Apart from operating the strange camera system, you will be running around, climbing and jumping to achieve your numerous goals. I felt the movement was perhaps a little heavy, it often felt I was wading through treacle but again, this was something we all adjusted to and became normal after a small period of adaptation. Some characters have other, different controls but they are few and far between, it is also quite obvious when you are controlling them what they can do too. A fan can blow things, a ruler can measure things, so on and so forth.

The whole game is designed very nicely. The progression is smooth, the tutorial is natural and you are never overwhelmed or overburdened by anything. Wattam teaches you what to do without it feeling like you are being taught anything. I like tutorials like that, it’s excellent game design and you are only shown a few tutorial messages when things may need explaining. Apart from that, you are left to your own devices, to use trial and error and experiment with the tools the game has provided.

Graphically, Wattam has a striking, bright simpleness to it. Everything is crisp, clear and very colourful. Everyone in my house remarked about how colourful it was, there are not many games released this year that look like it. It’s instantly recognisable and I commend it for that. The faces of the characters and the animation all remind me of young children’s cartoons, that is by no means a bad thing and I savoured the games bold approach to its visual style.

The soundtrack perfectly matches the themes and style of the game. From its one song I remember that had humans humming to strange percussion and cheerful orchestral sounds, the whole soundtrack is bright and cheery to compliment Wattam’s bold art style and pleasant gameplay. Each section of this titles composition compliments the others, they all work together to create a heart-warming, fun exploration into a mad but entertaining world of uncanny characters.

My only real gripe with Wattam was its performance. We played on the PlayStation 4 Pro and regularly got freezing, hitching and long delays while new items loaded into view. It was not game-breaking but I feel a bit more optimization would have helped. Hopefully, these small performance issues can be ironed out, as my boys asked me on several occasions why the game kept freezing and there was not a lot I could tell them. It did seem to be when new items were introduced to the world and when the action got hectic. This should be easily fixable with a future patch.

Wattam is a great experience. It will confuse you, bewilder you and make you wonder why you are even playing it. Yet you will find it hard to put down or give up on. It’s surreal, warm and great in multiplayer if you have kids or mad adults to enjoy it with. Wattam is a game like no other you will play this year and performance issues aside, it is a pleasurable experience and an extremely unique one at that. It will not be to everyone’s taste, not by any means but it may be worth giving it a shot if you want to try something novel and original to play.

Wattam is out on the 17th of December and is available on PS4 and PC.

Completely mental, colourful, funny and an entertaining multiplayer experience, Wattam constantly surprised me with its surreal characters and insane gameplay. It will not be everyone's cup of tea but I think a lot of people will appreciate it for what it is. A bright, cheery experience that will leave you confused, baffled but smiling and laughing at the same time.