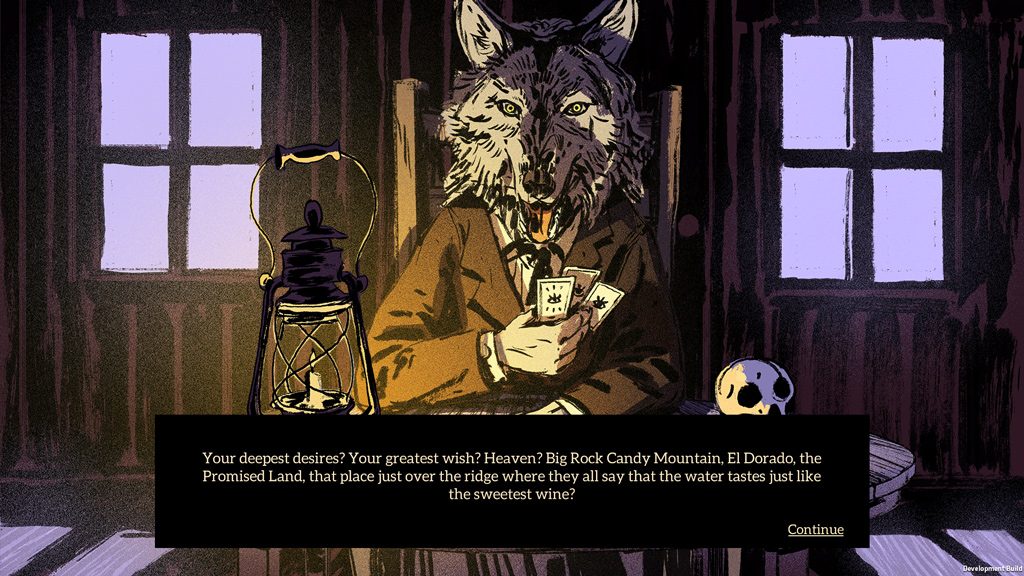 Original video game concepts are a rare commodity these days; those that do appear are usually from a small independent company or single developer who can shun commercial pressures in order to produce something truly new and interesting. Dim Bulb Games has done just that with their first (and hopefully not only) release, but does the concept of folk storytelling make for a good game?

After losing a card game with a wolf (voiced by Sting), your player dies and is obliged to wander the U.S.A. as a travelling skeleton hobo in limbo. Your aim is to listen to and collect stories from people you meet on your journey, sharing them with other travelers whom you meet at campfires around the nation. You set out on your journey, walking at a leisurely pace across a simplified sketched 3D map with only your bindle (bag on a stick) for company. The simplistic graphics still manage to evoke a perfect feel of old world America as they are combined with a glorious soundtrack of blues, folk, and roots music. The day/night cycle and shadows cast by the moving clouds all add to the atmosphere.

“No story lives unless someone wants to listen.” – J.K. Rowling

On your travels, you’ll come across buildings, waypoints, and markers indicating potential new stories or opportunities to make money. Stopping at any of these places opens a nicely drawn still image accompanied by a voiceover narrating the short story or scenario. Each part of the fable or anecdote is prompted with a press of Cross plus occasional choices which allow you to interact with the character. Although, you still add the tale to your collection regardless of your choices.

Most of the stories that you come across are little more than interesting observations, situations or anecdotes. There is the occasional story of a family tragedy or a slightly more consequential tale. As there are several hundred stories to collect, the game strikes a nice balance between the anecdotal and the meatier folk tales. With a press of Triangle, you can view your inventory (collectables given to you by the main characters), the tales you have accrued, and the 2D map of the U.S. which reveals undiscovered stories and cities.

“There is no greater agony than bearing an untold story inside you.” – Maya Angelou

The larger cities loom up at you on the 3D map as one large metropolis instead of individual buildings. Upon entering, a menu screen opens up, allowing you to choose to look for work, buy local food, take a train to another city, or explore which rewards you with another story. Working usually boosts your “$” reserves for buying food, eating increases your health, and your “Zzz” levels are topped up when you manage to rest at appropriate stops on the map. Death involves a trip to see Wolfy for a brief talking to before you’re back on the road again.

Every so often, you will come across a campfire which signifies a one-on-one chat with another of the twelve fellow travelers, all of whom are drawn from vague stereotypes representing the working classes in the late 19th century and early to mid-20th century. During your nighttime chats, the characters will tell you about their lives and experiences in exchange for certain types of stories. Tales of hope, sadness, comedy, adventure and the supernatural are all requested. This is where you use your judgement to choose the appropriate fable which you then recount to satisfy your compadre.

Should you successfully sate them with a tale to suit their moods before sunrise, the eye opens at the top and you unlock the next part of their story when you meet again. You can also use their anecdotes to satisfy different campfire companions as a wildcard, i.e. if you’re not sure which tale of sadness to choose, use a travelers’ tale which generally covers all the bases.

“Storytelling reveals meaning without committing the error of defining it.” – Hannah Arendt

These exchanges are the main meat of the game, and require a modicum of understanding of the stories collected in order to progress, so make sure you listen! Here’s where one of the main problems of the game arise though: the interpretation of the tales and the emotional labeling of the stories. Forcing the player to decide if a story is happy, sad, exciting or scary removes some of the ambiguity and subjectivity inherent in storytelling. This also goes against the concept of how folk tales grow in the retelling, with the interpreter adding their own spin, inadvertently changing the meaning in doing so.

It doesn’t handicap the whole experience, but a less pigeon-holed device for swapping tales might have been better.

The other fly in the ointment is the sedentary and meandering walking method for exploring the map. This starts off as a refreshing change from the normal pace of modern games and reflects the mood of the travelling hobo. Whistling (L1) allows you to fractionally speed up your skeleton and you can hitch a ride in passing cars or hop on a train to navigate the map more quickly. However, the more you play, the more you realize that a fast travel option would have cut out a significant amount of legwork, which only increases as you chase down the constantly respawning campfires and last few stories.

Also, a little more variety in the gameplay and how the player influences the outcome of the stories would have made the whole experience a little more satisfying and encouraged players to replay the game after completion.

Despite the previous gripes, ‘Where the Water Tastes Like Wine‘ is a genuinely refreshing change of pace for anyone who is looking for an innovative and lovingly crafted adventure, and for players with the patience to appreciate the wealth of story text and beautiful accompanying artwork. The soundtrack is loaded with gems too; the original songs greatly enhance the experience, making you feel like you’re there soaking up the atmosphere of the American West in 1925.

Where the Water Tastes Like Wine is out now on PS4, PC, Nintendo Switch and Xbox One.

An inspired attempt at something new, like an Americana graphic novel read through at a snails pace. The lovely meditative quality to the gameplay eventually becomes somewhat frustrating because of repetition, the limitations of the concept and how much the player can interact with the characters and stories. Regardless of these shortcomings, anyone looking for some fresh ideas in their games should give it a try.