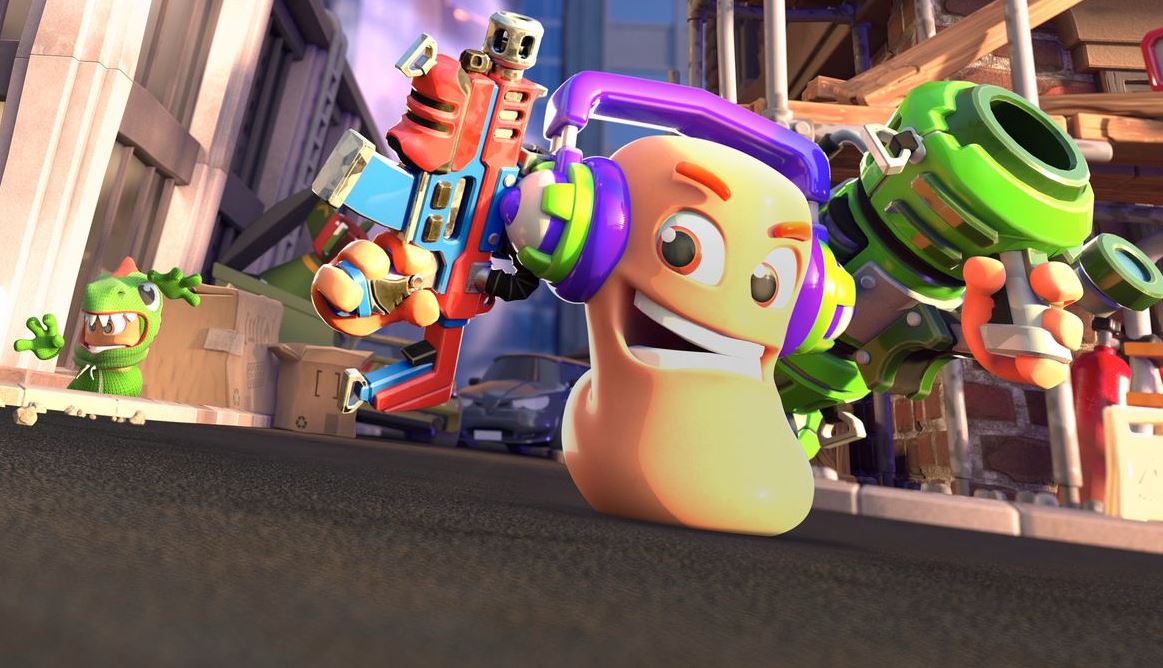 Worms Rumble PS5 Review – Team17 are back with another dose of their most famous franchise, and just in time for the 25th anniversary. However, this may just be the least Worms-like Worms game that the U.K. developers have ever made. Ditching the traditional turn-based formula, Worms Rumble presents Worms as a full-throttle real-time 2D shooter.

Worms Rumble is definitely not Worms as we know it. If not for our familiar cast of invertebrates and their lethal bananas, Worms Rumble would be unrecognisable to fans of the franchise. In spite of this drastic deviation from the traditional formula, it’s hard to deny how well it works. The action is frantic and frenzied, but nuanced enough to satisfy competitive players.

Worms Rumble allows up to 32 players to battle online in one of three modes; Deathmatch, Last Squad Standing, and Last Worm Standing. Before being thrown into your first bloodbath, you’re directed towards the tutorial level where you get to grips with the controls. It’s striking how fun it is just to manoeuvre your worm through the level.

Worms retain the signature floaty jump but with the addition of a rolling sprint and wall jump. Furthermore, you can acquire support items, such as a jetpack or a ninja rope, to further bolster what is an already fun traversal system. The levels themselves offer interesting ways to get around, such as by using zip lines and trampolines. It is quite a scene to see handfuls of worms manically flying about the screen with these mechanics.

If the whole point of the game wasn’t to focus on the annihilation of your fellow players, you could just as easily enjoy scooting around the vast level layout. The 3 levels available at launch are all fun and interesting, and they look great. The general visual presentation isn’t groundbreaking, but it is pleasing on the eye. There are a few minor technical glitches at launch but overall the game performs well at 4K 60 FPS on PS5.

Worms On The Hook

The twin-stick real-time shooting really is an unexpected delight. Moreover, it’s very accessible for a casual game and charismatic enough that a poor score isn’t a bitter loss. You will be perpetually seduced into one more round, and for those that keep returning, there is a fair bit of depth to discover.

Worms Rumble features some classic Worms weaponry and some new additions to the arsenal, all to be experienced with the excellent inclusion of the DualSense’s Haptic Feedback. Every player has a starter weapon of either a hand cannon, assault rifle, or shotgun. The player must procure additional weapons, grenades and support items from chests. Generally speaking, the weapons from chests tend to have a more devastating impact, and as such the game favours players that boldly venture forth to obtain them.

There’s a slight unevenness to the weapons at launch. Some feel far more effective than others, though this unevenness could be a symptom of the reduced selection. However, it isn’t game-breaking by any stretch of the imagination. It will be interesting to see how new potential additions affect the balance of the game in further updates. For the meantime, there are plenty of tactical options to approach your fights.

Worms Rumble has more to the combat than it would initially seem. Rolling provides an excellent means of escape from a pursuing player. Furthermore, the huge maps are filled with ventilation tunnels, which provide tactical opportunities. The tunnels only become transparent once inside, allowing for a player to get the jump on one another.

The environment does miss the destructibility of classic Worms games, but there are still interesting ways to take advantage of it. For instance, one of the new weapons can apply laser beams to your surroundings in order to fortify your position. Clever tactics can keep you alive surprisingly long considering the madness the game ends up in at times.

The classic Worms Baseball bat also returns, but it won’t be hitting home runs like it used to. This time the bat is your default melee attack, but also can be used to deflect oncoming projectiles, effectively turning around the advantage another player might have with a missile-based weapon. Of course, this will work on grenades too. All these small gameplay inclusions make for satisfying rounds at any player level.

Worms Rumble is a great inclusion for PS Plus subscribers and has a similar progress structure to other free multiplayer games on the service. Earned XP for each battle will unlock cosmetic options for your worm and their weapons. Future seasonal events are also scheduled to be part of the experience.

Currently, there’s plenty of customisation options to be unlocked. It’s a shame there isn’t as much gameplay content to match. With just three different maps and a dozen weapons or so at launch, there’s definitely room for more content. However, it must be said that the basic launch package is still a fun experience with lots of replayability.

Deathmatch is really the bread and butter of this game. The other two modes, Last Squad Standing and Last Worm Standing are encouraged at higher player levels. Whilst they do give the truer Battle Royale feeling to the game, they can be over disappointingly quick. Death-match feels the most replayable and ultimately the most fun. Fortunately, with cross-play enabled, matches can be found easily at launch on whichever mode takes your fancy.

A Good PS Plus Game with Future Potential

Perhaps the most incredible feat that Worms Rumble pulls off is retaining so much of that wacky Worms magic whilst completely defiling its core traditions. The real-time element of the game not only works, but it also thrives. Whilst not suitable as a replacement for traditional turn-based Worms, Worms Rumble shows that there is a place in parallel for a real-time spin-off.

The title as it stands is a bare-bones offering of content, but with fun gameplay and the promise of future updates, Worms Rumble is an already good PS Plus game with plenty of potential. At the cheap price point (and cheaper still if you managed to grab it on PS Plus), Worms Rumble is a very compelling online multiplayer purchase.

Worms Rumble proves that worms don't need to take turns to sentence one another to a sheepy death. Not only that, but Worms Rumble succeeds in giving us an accessibly fun shooter with a decent amount of nuance for the competitive to wrestle with. The real-time combat and traversal work very well, and with speedy matchmaking, you'll always be up for one more game. The levels are well designed for a fun experience, although we would hope for more options in the future.