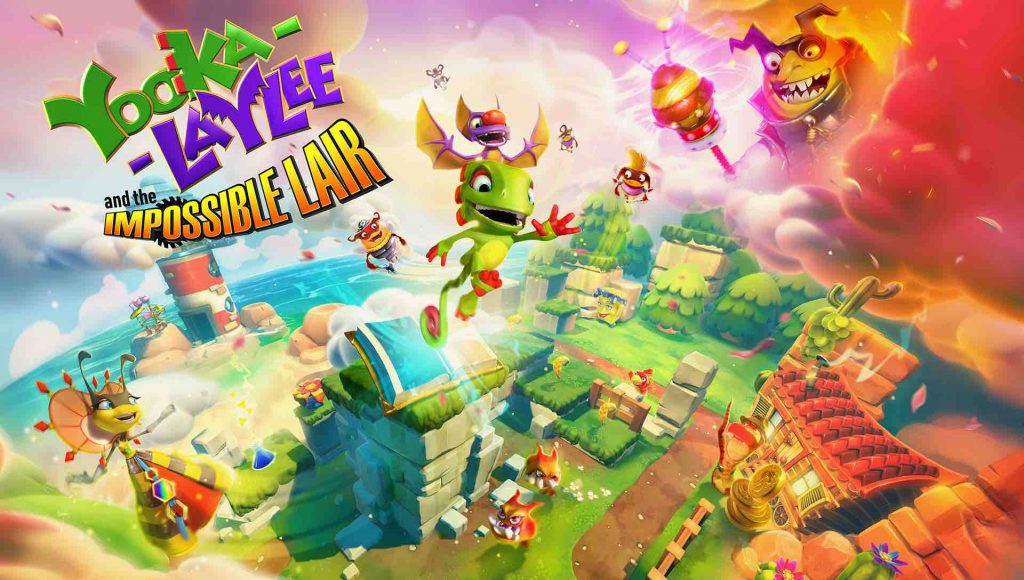 When Yooka-Laylee finally emerged from its Kickstarter cocoon it felt every bit like the letter of love to Banjo-Kazooie that we all hoped it would be. Now, some two and a bit years later a sequel has appeared in the form of Yooka-Laylee and the Impossible Lair that rather than merely continuing to adopt the 3D platformers of Rare’s halcyon days, instead reaches further back in the back catalogue of that legendary developer.

A Classically Inspired Platformer With Some Compelling Twists

As such, the the two-dimensional escapades Yooka-Laylee and the Impossible Lair feel much closer to something like Donkey Kong Country (many of the key creative staff behind that game worked on this) and The Legend of Zelda, and because of this, the influences of those two classic titles can be seen threaded through every aspect of Yooka-Laylee and the Impossible Lair’s DNA.

The premise of the Impossible Lair is thus – the arch-nemesis of the duo, Capital B, has fashioned a device called the ‘Hive-mind’ that has allowed him to subjugate the population of the Bee Kingdom. Obviously perturbed and more than a little annoyed by this turn of events, Queen Pheobee has enlisted Yooka and Laylee to free her Beetalion and together defeat Capital B in the deep, dark depths of his Impossible Lair – a fortress stuffed with screenfuls of traps and vicious monsters.

Cleverly, the bees and the Impossible Fortress are deftly intertwined. You see, each member of the Beetalion that Yooka and Laylee liberates contributes to a Bee Shield that prevents our heroes from taking damage – a boon that proves essential to taking on the halls of the game’s titular final stage, the Impossible Lair. Here’s the thing though, you can tackle the Impossible Lair at any point you want in the game (your attempts are recorded, mind), though the density of the Bee Shield that you possess will almost certainly correlate to your chances of success if you find yourself not possessing Jedi-like reflexes.

And so the main structure of Yooka-Laylee and the Impossible Lair unfurls itself. Before you get stuck into all that side-scrolling, 2D platforming goodness, Playtonic’s sequel shifts perspective to a top-down over world, and it’s here that Zelda comparisons ring true as players can wander around a number of themed defeating enemies, throwing switches and solving puzzles that result in one of the Impossible Lair’s most intriguing facet.

Each of the levels within Yooka-Layee and the Impossible Lair is contained within the pages of a book that and, rather interestingly, actually has two states. For example, a book lying on the ground might take players into a forest world, but if you open a dam that floods the area where the book is laying, soaking the tome in the process, you’ll be able to take on that forest in all-new state as water rushes through the woodland, opening up new paths, bringing forth new enemies and essentially creating a whole, brand new level in the process.

It’s a great feature, not just on account of its innovation (on reflection, it certainly seems like a very Nintendo-like thing to do), but also because it makes Yooka-Laylee and the Impossible Lair feel like a much more beefy proposition as a result.

Sadly, your traversal around the Legend of Zelda style overworld is restricted and contained on account of the ironically named ‘Paywalls’ that are erected everywhere, luckily though, they can be opened with T.W.I.T coins that you find in each level, and it’s for this reason that Yooka-Laylee and the Impossible Lair encourages players to complete these levels above and beyond the need to free members of the Beetalion.

Once you get into the actual two-dimensional platforming proper, it isn’t long before Yooka-Laylee and the Impossible Lair’s design heritage becomes apparent. Let’s not make any bones about it – Yooka-Laylee’s second outing feels extremely similar to Rare’s Donkey Kong Country games of old. From the heft of the actual platforming itself, to the level of difficultly and penchant for cannons (in place of barrels) that shoot you in various directions, it’s clear that Yooka-Layee and the Impossible Lair is a loving and affectionately penned love letter to those platformers of old.

This being Playtonic however, the British developer has seen fit to infuse a number of smaller innovations and wrinkles to the formula to keep things refreshing and different in equal measure. For a start, Quills, are the currency in the game and can be obtained in relative abundance from each of the different stages. Used to buy key items in the overworld, Quills are most commonly used in the barter for special tonics that act as a balancing tweaks to the game’s platforming action.

Though they encompass the purely cosmetic (such as big heads and various movie style filters), it’s really the balancing tonics which can make a world of difference to how you play. One tonic might, for example, provide Yooka-Laylee with an extra jump move to reach previously inaccessible areas, but the trade off however, is that the more tonics you have active at any one time which work to your advantage (up to three), the bigger the proportion of your precious Quills you will lose at the end of each stage.

Brilliantly, it works the other way around too, because if you equip tonics that make your life more difficult, such as ones that make your enemies hardier or slow down your movement, you can actually gain a bonus to your quill haul at the end of each stage. In this way, Yooka-Laylee and the Impossible Lair provides yet further still longevity and provides another layer for players to tweak the experience to their liking.

Playtonic’s second outing handles player health in an interesting way too – when hit, Laylee will detach from Yooka in a panic, leaving the latter exposed until the two can reunite again – something that the bells dotted around each stage help to achieve. However, when the two are detached there is more than a loss of health at stake, because without Laylee, Yooka won’t be able to reach the same heights or perform the same range of attacks and manoeuvres which adds yet another dimension to what is already a impressively and deceptively deep affair.

As polished and as clever as Yooka-Laylee and the Impossible Lair is, it does nevertheless find itself occasionally hobbled by an overly brutal checkpointing system. So once you’ve unlocked a cage with a key to get a precious T.W.I.T coin for example and then you die, the cage and the coin are both reinstated, but you cannot go back and get the key to open it as there is no way to drop down certain ledges and retrieve the key. To say that this is infuriating would be quite the understatement, but thankfully it stands as the game’s sole, significant flaw.

Likewise, the difficulty of Yooka-Laylee and the Impossible Lair is quite something and does indeed ramp up pretty quickly; something that genre rookies should certainly consider before jumping in. Ultimately though, vivid, colorful and generously awash in easy-going, charming humor, Yooka-Layee and the Impossible Lair is a top-notch platformer, stuffed with secrets in every corner of its pixellated realm.

Though Playtonic invited players to relive the past through the first Yooka-Laylee, it arguably succeeds far more with Yooka-Laylee and the Impossible Lair, not least because the British developer has managed to meaningfully augment its classic influences with a range of innovations that serve to elevate the whole affair above mere mimicry.

Yooka-Laylee and the Impossible Lair releases on PS4, PC and Xbox One on October 8, 2019.

A much more inventive and thoughtful affair than the duo's previous outing, Yooka-Laylee and the Impossible Lair is the closest you'll get to Donkey Kong Country on PS4 and you should embrace it with the accordant warmth.