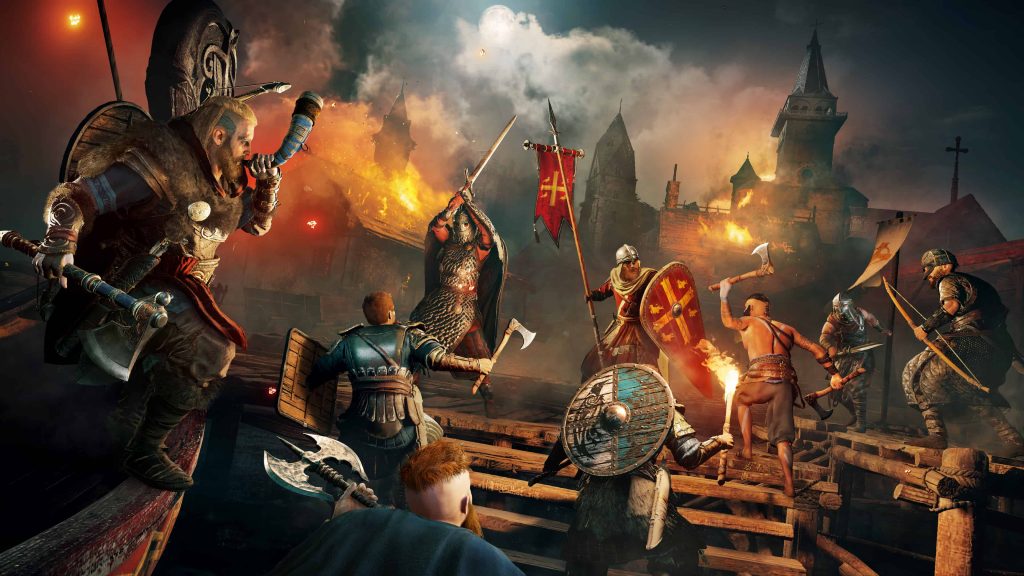 30 minutes of Assassin’s Creed Valhalla gameplay has leaked online and there is a lot we learned from it.

All of this footage from Ubisoft is a work-in-progress and we won’t be linking to the video, just going over the highlights we saw. If you do want to see it, it isn’t that hard to find on the internet.

First of all the game looks to have a similar HUD to Origins and Odyssey, with the addition of a horse stamina meter and the option to switch to a cinematic camera. The Pulse also returns revealing enemies and items in the area.

Towns and areas seem to have different ratings as to how wealthy they are and how many mysteries and secrets they hold. And, finding discoveries and items within those regions, will increase those stats. The Map looks similar to Odyssey, with the landmarks all being 3D and it looks like a mini diorama.

Skills make a return with them being separated into three trees. Stat nodes increase your base fighting stats, whilst main skills unlock new passive moves for combat. Activating these different nodes increases your overall power.

Gear is now aligned with different animals and each skill tree will provide bonuses to that gear category. These categories are split into the Bear, Wolf, and Raven. Presumably, each of these categories has different strengths and weaknesses in combat.

The Inventory screen looks almost identical to the last two games, with even your quiver and rations bag having a set number of upgrades available. It seems you can hold two weapons (and they can be different), as well as a bow and the five pieces of armor. There appears to be four different types of materials used for upgrading.

On top of that, weapons and armor can be upgraded straight from the menu, increasing their attack, impact, speed, and critical damage. Armor upgrades will boost your defence and also your evasion.

Combat seems to be pretty similar to the last two games, although you can now throw weapons and stomp on downed enemies. As shields are made of wood, sustained attacks will break them and leave enemies open.

We see the return of the two ability wheels on either trigger with one allowing you to throw a tomahawk. There also appears to be the option for a finishing attack one enemies. Another ability is the Spartan Kick, which makes a return and presumably will be called the Viking Kick.

Enemies include wolves roaming around and your typical soldiers. We also get a look at the talked about Viking Sieges. You can also use the Ram yourself to break down barriers and gates during these sieges.

Finally, we see an option in the menu for the Animus, although we aren’t sure if that just leads to lore or gives you the option to explore the modern-day.

Overall the gameplay looks like a more gritty and in-depth version of what we saw in the last two games. However, it still looks like those two games, which means Valhalla isn’t going to fundamentally change the series like Origins did.

The gameplay did look rough, but it seems like this footage is from an early build where texture quality is low and refinements haven’t been made. Still, we should see more at Ubisoft Forward next Sunday.

Assassin’s Creed Valhalla releases this holiday for PS4 and PS5.