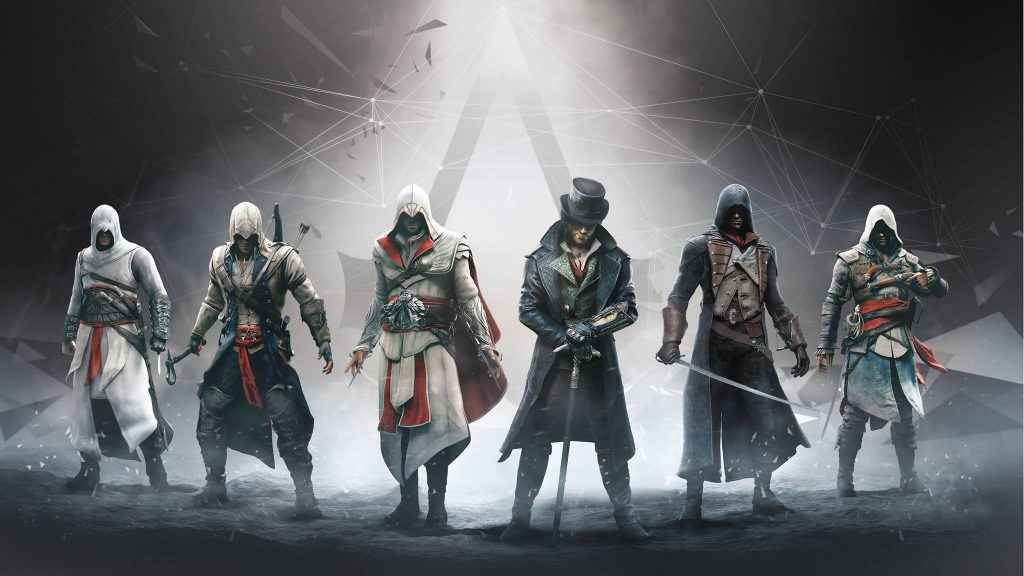 And so to help you separate the wheat from the chaff we have listed all of the Assassin’s Creed games available and ranked them best to worst, starting with…

Side-on stealth platformers that were spun out of the core franchise, the three installments of Assassin’s Creed Chronicles whisked players away to a range of new locations and time periods such as 15th century China, 19th century India and early 20th century Russia.

Sadly, while the change of settings and heroes were welcome (it was nice to actually play Ezio’s protege Shao Jun, at last), the sluggish controls, rote stealth gameplay and uninspiring writing were not and largely failed to capture the appeal of the core series.

When Assassin’s Creed made its debut back in November 2007, there wasn’t anything quite like it on the market. An opulent and frequently breathtaking hybrid of open world adventure, stealth, parkour and a story that rather vigorously humped the leg of Dan Brown, it’s fair to say that many were taken with the game that started it all nearly 11 years ago.

However, it wasn’t long before cracks began to appear in Assassin’s Creed seemingly impeccable facade. Repetitive mission design, an overly convoluted plot and face numbing amounts of busywork all added up to an effort that was decidedly less than the sum of its shiny parts.

Nonetheless, while the very first Assassin’s Creed was arguably one of the lesser entries in the franchise, it’s crusades-era setting is still one that deserves a series return.

A series first, Assassin’s Creed III: Liberation broke the mold by allowing players to step into the boots of Aveline, an Assassin who must undo the influence of the Templars in her home of 18th century New Orleans.

A streamlined take on the traditional Assassin’s Creed formula, Liberation offered little that was truly new to the franchise outside of its bold choice of main protagonist. If anything, Liberation is perhaps more fondly remembered as providing Sony’s beloved PS Vita handheld with an Assassin’s Creed experience that was as close to full-fat as it was ever going to get.

The final part of the Ezio trilogy, Assassin’s Creed Revelations whisked our now aging hero off to 16th century Constantinople and bringing his tale to a close in the process.

Though a glossy and ultimately decent enough end to the trilogy, Assassin’s Creed Revelations simply felt like the developers had ran out of ideas as the game failed to be implement any new features to meaningfully separate it from its predecessors – a shame given the creative toy-box of possibilities that this entry in the series held.

Set in 18th century New York City and Boston and boasting a shiny new engine *and* a Native American protagonist, Assassin’s Creed III looked like the reboot that the series needed – well, on paper anyway.

While the breathtaking sweep and spectacle afforded by the improved visuals and evocative Revolutionary War setting proved compelling, Assassin’s Creed III’s protagonist sadly proved anything but.

Though his Native American background was interesting, Conor himself sadly was not and roundly disappointed players with his overly stoic nature and one-dimensional writing. Worse still, the disappointment was compounded by the fact that Assassin’s Creed III started you off by playing as the deliciously slick Templar agent Haytham Kenway before switching over to Conor for the rest of the game.

Truly, this was the worst character switch swerve since Metal Gear Solid 2.

Nevertheless, we’ll all get a chance to see if Assassin’s Creed III fares any better second time round as a heavily remastered version of the game is set to release on PS4 early next year.

Additionally, built from the ground up with the muscular architecture of the PS4 in mind, Unity’s depiction of Revolutionary France was stirring – detailed period structures and thronging Parisian crowds all combined to create the most detailed world seen in the series to date.

Unfortunately, the execution left something to be desired. Between those meme-worthy visual bugs that would horrifically strip the skin from the faces of some NPCs, through to the overwhelming amount of busywork the game thrust upon the player (the world map is quite literally smothered in way point icons), Assassin’s Creed Unity never ended up being quite the game it should have been.

Using the 18th century set Seven Years War as a backdrop, Assassin’s Creed Rogue was a functional continuation of the traditional series beats and high-seas swashbuckling gameplay that Black Flag so deftly married.

Though Rogue was good but hardly exceptional, the insight into the Order of Assassins and the duplicity that lay within both added additional texture to the long running power struggle between Assassin’s Creed’s two longstanding opposing sides.

Though the series trademark busywork had not been completely done away with, Assassin’s Creed Syndicate nonetheless impressed with the ability to switch between a pair of sibling Assassins, missions that involved the likes of Charles Dickens and a deeply romantic depiction of Victorian London that was all cobbled streets, foggy alleyways and famous landmarks.

Arguably, Assassin’s Creed II was a turning point for the entire franchise going forward. In addition to rubbing shoulders with luminaries of the Italian Renaissance such as Leonardo da Vinci and Michelangelo, Assassin’s Creed II’s narrative was kept ruthlessly engaging by the sheer fact that it’s hero, Ezio Auditore, was outrageously charismatic and great fun to play.

Equally, the lavishly rendered world of Renaissance Italy was a joy to wander about in, and though the specter of repetition hadn’t been banished, Assassin’s Creed II offered so much to do in such a lushly detailed world that you often didn’t mind.

Assassin’s Creed II was remastered and later released on PS4 in 2016 as part of The Ezio Collection.

Easily the best of the ‘old’ Assassin’s Creed formula before the series decided to take a wander into decidedly RPG style pastures, Assassin’s Creed Brotherhood remains a robust series highlight.

Not only did it introduce competitive multiplayer (sadly removed from the PS4 version), but Brotherhood shifted it’s Florentine setting to 16th century Rome and in doing so provided the series with one of its finest settings and a commendable refinement of everything that was done in Assassin’s Creed II.

Assassin’s Creed Brotherhood was remastered and later released on PS4 in 2016 as part of The Ezio Collection.

Taking place during the Golden Age of Piracy in the 17th century Caribbean, Assassin’s Creed IV: Black Flag put players in the sun-bleached britches of Welsh pirate Edward Kenway as he roamed the high seas in search of fame, fortune and eventually Templars.

A maturation of the traditional series template up to that point, Black Flag blended in highly satisfying naval combat and exploration to really set the game apart from other entries in the franchise.

Whether you were sprinting across sparkling white sands in the pursuit of treasure, boarding an enemy vessel during ship to ship combat, or, just sailing along listening to sea shanties, Black Flag excelled in capturing the Golden Age of Piracy like no other game.

The first entry in the Assassin’s Creed franchise that would take it wandering down RPG Boulevard, Assassin’s Creed Origins transplants the action to Ancient Egypt and casts players as Bayek – an exile who must combat the Order of the Ancients, a precursor organisation to the Templar Order.

In addition to the shift to the beautiful sands of Ancient Egypt, Assassin’s Creed Origins also brought the open-world RPG template that Odyssey would later improve upon.

Boasting a massive world with a variety of side-quests to take on, a paring back of the series traditional busywork and a new Dark Souls style combat system that demands skill over just hammering the counter button, Assassin’s Creed Origins represented a bold new direction for the series and proof that the franchise was all the better for taking a year off.

Sitting at the apex of Ubisoft’s long-running franchise, Assassin’s Creed Odyssey emphatically completed the series shift into a full blown, open-world RPG and proved that the franchise was long destined to exist in the genre.

Allowing players to choose between two different characters with new branching dialogues, multiple endings and hilariously well-written side quests, Assassin’s Creed Odyssey thrust players into an ancient Greek mythological adventure the likes of which we haven’t borne witness to.

More than that, it also gave players Kassandra – quite possibly the most sarcastic and dryly entertaining protagonist the series has ever seen. Assassin’s Creed Odyssey isn’t just the best Assassin’s Creed game money can buy, it’s also a thunderously great open-world RPG in its own right, too.

Do you agree with our rankings? If not, let us know in the comments below how you would rank the Assassin’s Creed games!