The big kahuna’s were out to play at EGX this year, with the likes of Middle Earth: Shadow of War, Far Cry 5, Call of Duty WWII, and Assassin’s Creed Origins; to name but a few. Ubisoft, Xbox, Nintendo, and PlayStation all vied to be centre stage and you may have been queuing for up to three hours to get your hands on fifteen minutes of juicy triple-A content. So when I got the chance to experience Assassin’s Creed Origins and Monster Hunter World, I seized it and devoured that time whole. 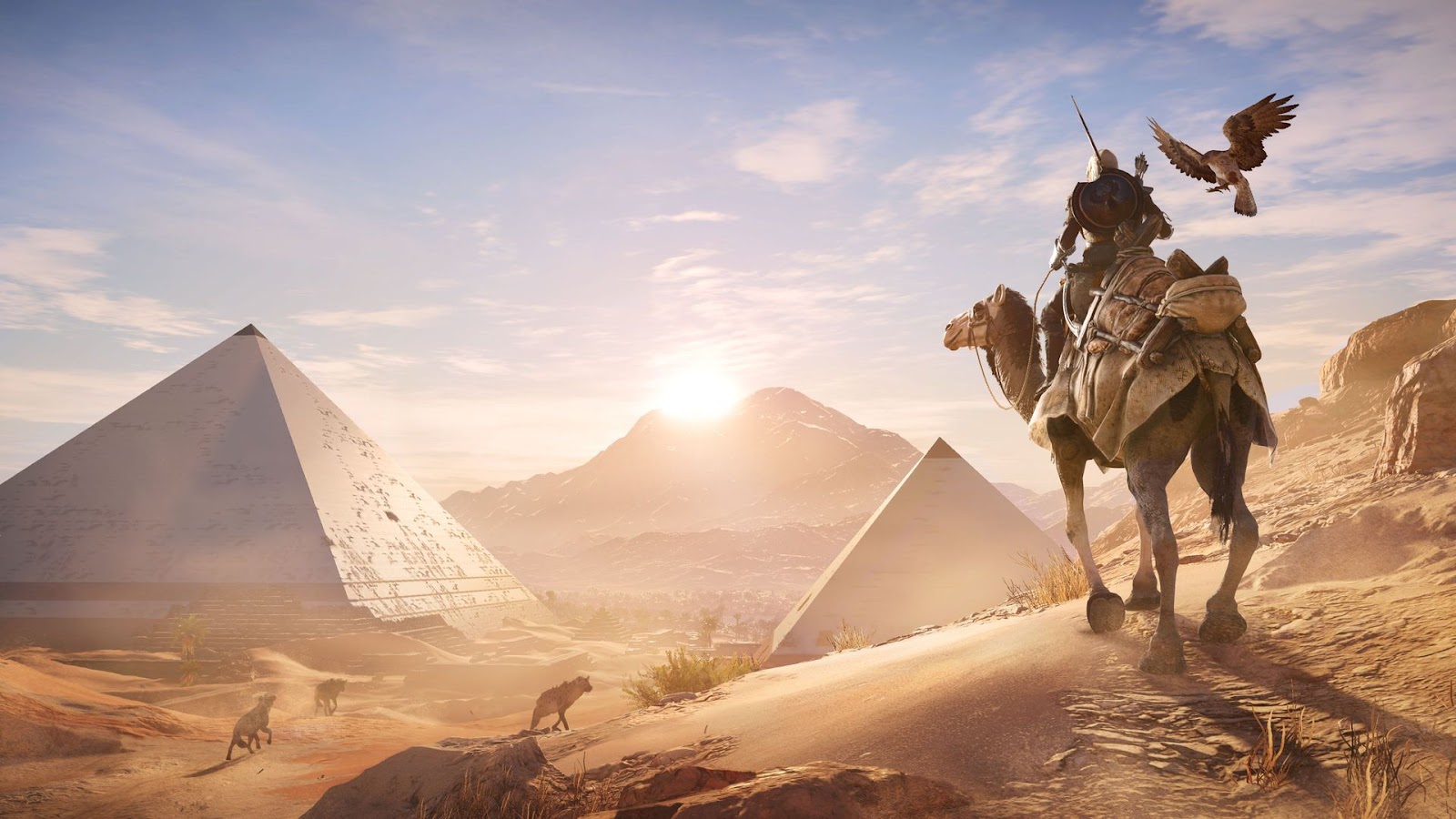 Stepping into Faiyum for the first time with Bayek, our new – ancient – assassin, was quite the spectacle. As always, Ubisoft have seriously done their homework to bring the ancient Egyptian civilisation to life and appear to have stepped away from Unity’s pitfalls as much as possible – these guys don’t have English accents for one. The demo sent me on a quest called: Sobek’s gold. Bayek has come across a priest punishing a young boy, who stands accused of ferrying two gold Sobeks to Krocodilopolis. A slave to Sobek, the boy claims his ship sank just out of port, the statues were lost, and that he did not steal them. Bayek takes it upon himself to seek out the truth, and so we set off to the nearby port where the ship allegedly sank…

One of the first actions to take was to call upon your eagle Senu. Our feathered friend adds tactical elements to the game, as he scouts ahead picking out enemies and locating your objectives; sitting as the precursor to Eagle Vision. You can also whip him out if you fancy a look at the view, which is downright spectacular, as you soar across the landscape. This prompted me to check out the map, to which I audibly exclaimed: ‘My god, this really is huge!’ – thankfully, in context, this didn’t raise any eyebrows. It is an absolute beast of a map which we hope will be just as beastly in content. There’s no mini-map here and features a mission bar, akin to what you would find in Skyrim. With this scaled-back HUD, which you can clear away entirely, Assassin’s Creed Origins seeks to encourage full immersion in the world before you.

As an Assassin’s Creed veteran it took a couple of minutes to fully adjust to the reworked mechanics and combat system. With limited time I thought, hey, here’s an idea! Let’s just jump on this enemy ship which carries one of the treasures I’m seeking and see what happens, rather than using stealth – which is, for the most part, what you would expect in an Assassin’s Creed game. I lunged at a guard, barrelled through a large pile of pots which exploded and then preceded to burn to death. After that brief ‘experiment’, I ran through the stages like a professional and utilised Senu to discover the underwater shipwreck. As you dive below the surface, you discover that there’s a whole ecosystem down there – not just a sparse underwater environment smattered with the odd bit of seagrass. Coming back up from down below with the first golden Sobek, I was callously mowed down by a passing vessel. The fellow steering started to hurl abuse my way, so I flailed with my sickle for a bit; attacking the side of his boat in a fit of sea rage. I then bypassed a nearby hungry hippo, as I made my way to the enemy ship containing Sobek number two.

This time I avoided the fire pots, got bitten by a cobra, which I felt slightly bad about killing, and retrieved the second sobek. With reactionary counters no more, combat is more dynamic and follows the Dark Souls school of thought, as you dodge and actively seek combat opportunities – admittedly it’s more forgiving than Dark Souls, but if your weapon doesn’t strike it will not do damage, so there is a sense of precision here. On my way back to the priest, I stole that bugger’s boat and powered back to shore…The headset was removed, and my time was done.

For more on Assassin’s Creed Origins, check out the latest gameplay trailer. 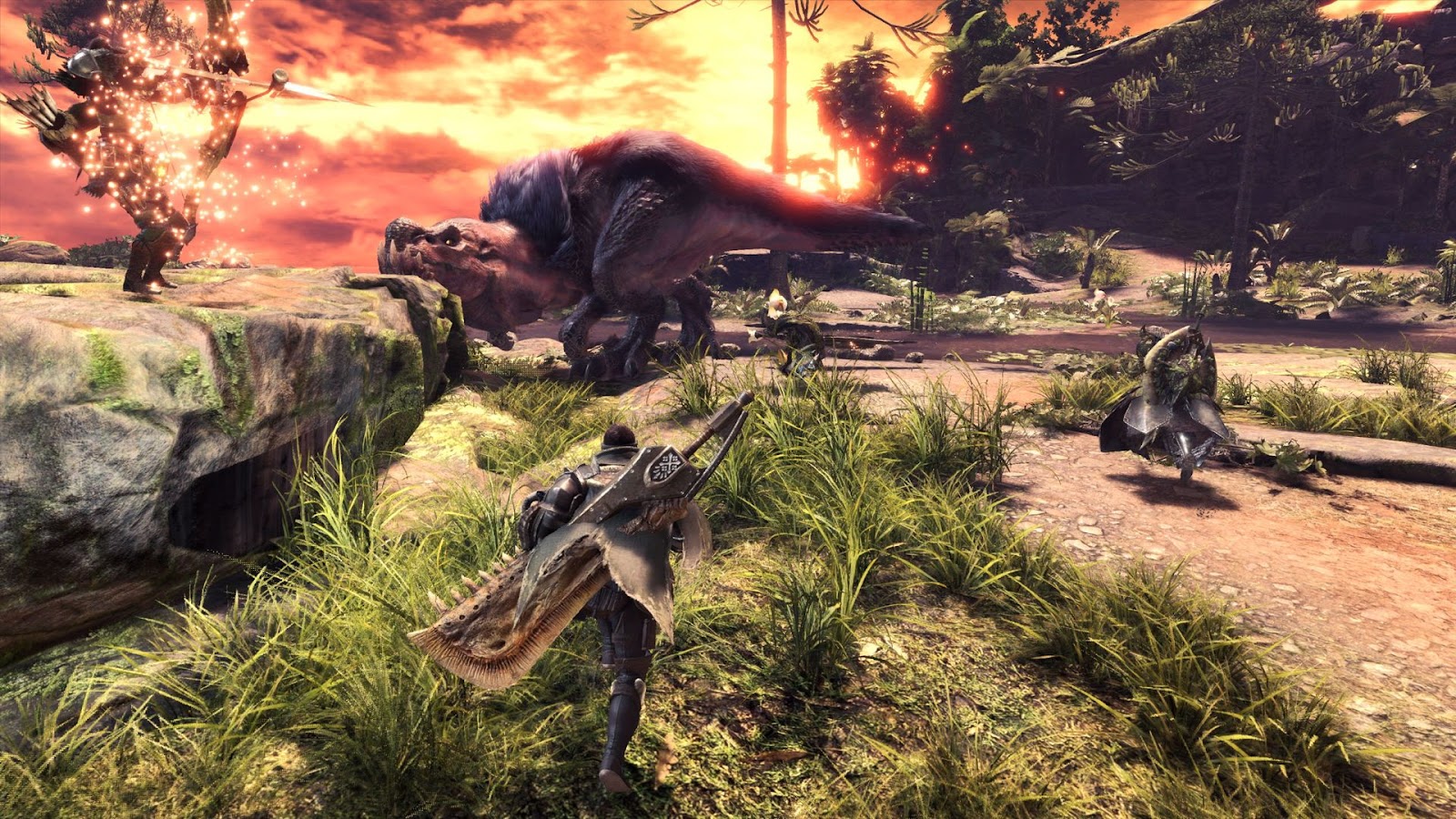 For this Monster Hunter World demo you were able to take part in two starter challenges: ‘Big Daddy Devourer’ (beginner) or ‘In Unfamiliar Shadow’ (expert). Both were an option of course, so that’s what I did – played both! As a spectator of previous entries in the Monster Hunter series, this was the first time that I could finally play it on a platform I actually own – being almost a decade since you could play the early iterations on a PlayStation console. Back then it wasn’t really on my radar as much as it is now, following its Nintendo success. Upon losing my Monster Hunter virginity I started out gently as a beginner, on the trail to fight the ‘Great Jagras’; a belly-flopping giant lizard, who enjoys lazing about in the sun. Before you set off, there’s a myriad of gear options for yourself and your kitty companion Palico, but with much of this optimised for demo purposes it was time to embark on the hunt.

As you set off from camp you hunt as you would expect, tracking scents and searching for footprints to locate your target; not forgetting the ever so helpful, luminous green Scoutflies. Once the Great Jagras was discovered, I ended up using my recent foray into Bloodborne as a blueprint for the combat system – what with the morphing sword/axe weapon to hand and the importance of keeping on your toes. What took a little longer to get to grips with were the combos, as combat provides a variety of options between the two forms of your weapon. There was a huge amount to take in, in such little time, and consequently in this first mission my eyes were darting around the screen’s HUD in an attempt to absorb all of the information rapidly. Once the Great Jagras had been taken care of, these combinations began to sink in and so I decided to take on the ‘unknown’ beast in the expert mission.

This hunt sets you on a longer trail which eventually leads you to an Anjanath, a creature that appears to be the result of a T-rex, dragon, and a very angry turkey. This fight is far lengthier, with health potions consumed more frequently and encourages you to utilise the environment – although hiding in a giant hollowed out log didn’t help too much, as it was crushed while I was inside it. Don’t worry, I survived! Sometimes the beastie could be distracted by other creatures inhabiting the area, presenting an opportunity to get in some sneaky hits. You know the creature you’re dealing with is severely weakened when it starts to retreat toward its nest. The Anjanath was finally defeated in its home cave, with a mere thirty seconds to spare before my time ran out. Not bad for a virgin – of Monster Hunter, I mean…

Even though we squeezed everything we could out of the time we had with Assassin’s Creed Origins and Monster Hunter World, they just left us wanting more with a tantalizing taste left in our mouths. Both showed us big promise in a short time – here’s hoping that these two giants live up to the rising expectation!

For more on Monster Hunter World ahead of its 2018 release, check out the latest gameplay video and great pre-order incentives.