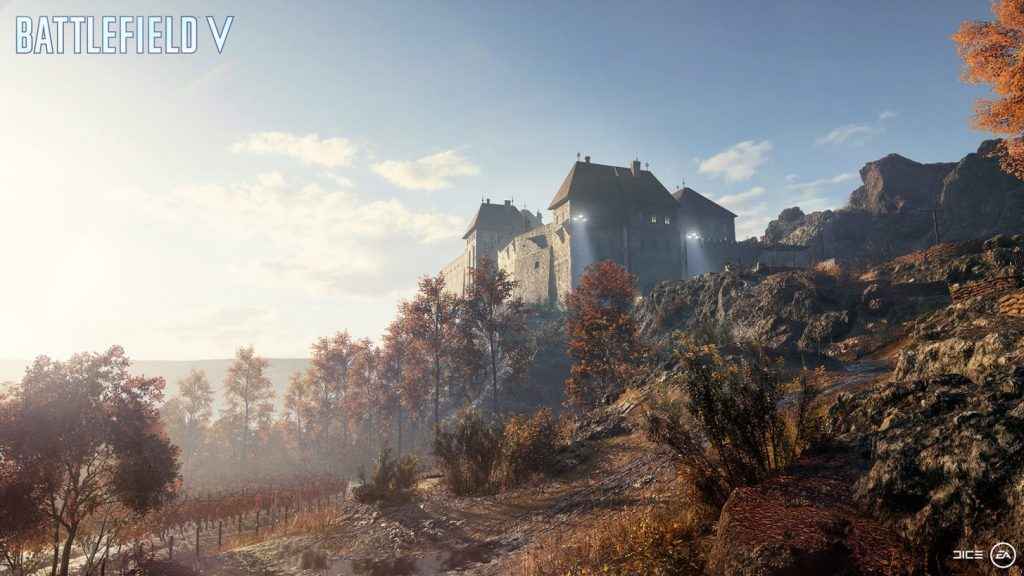 It’s been a while since we published our comprehensive written guide to locating all fourteen letters hidden throughout the visually stunning arctic landscapes of war torn Nordlys. Sorry about that.

But fret not: we’re back! And today, our goal is to help you find every last collectible Tirailleur – the third of Battlefield 5’s four single player War Stories – has to offer.

As with the previous two War Stories, the first letter is located at the very beginning of chapter one.

Make your way to the bunker on the western edge of the outpost you’ve just finished liberating and look inside. To the left of the entrance you’ll see a stack of ammo crates, on top of which sits letter number one.

Leave the outpost and continue up the hill toward your next objective, until you come upon a small stream facing a field of Dragon’s Teeth to the north.

Turn around and head towards the burnt-out tank on the western boundary of the map. Search the ground next to it on the right and you’ll find the Tirailleur’s second letter.

#3 Two Parties Instead of One

Letter three is located on the opposite side of the aforementioned field of Dragon’s Teeth, in front and to the right of the gun emplacement in the northeast.

Once again, you’ll need to head towards the edge of the playable area until you reach a stack of ammo crates that mark the resting place of the third collectible.

From here, make your way towards the huge bunker that forms your main objective in this chapter.

About halfway between the bunker and the allied lines in the northwest is yet another stack of ammo crates, located just in front of a sandbag wall.

The fourth letter lies on the corner of one of these boxes.

Having captured Stutzpunkt Geist, the final part of Tirailleur chapter one tasks you with holding it. Fortunately for letter hunters, this just so happens to be where the fifth and sixth epistles are located.

The first of these, letter five, sits atop a green ammo crate on the northwest side of the outpost; just left of the trio of troop transports.

Letters six, meanwhile, is on the opposite side of the encampment.

Specifically, in the leftmost of the two white buildings that comprise the barracks, on top of the small wooden crate that sits next to the desk in the centre of the room.

The rightmost of these ends in a dead end, marked by a recently destroyed troop transport truck. In front of the wreckage is the body of a soldier and the seventh collectible.

With letter seven in your possession, you can begin heading down the left of these two paths, only stopping once you’ve reached a small dirt track leading off this path uphill to the left.

Follow this new course, turning left wherever possible, until you come across an isolated ammo crate overlooking the previous area. As always, the letter you seek has been placed carefully on top of this container, as if it wants to be found by the first Tom, Dick, or Harry that happens upon it.

We’ll be using another vehicle to help us locate the next collectible, too; this one the burnt-out plane to the east.

Directly opposite the downed craft and a few paces up the gentle bank that runs alongside the forest path on the right, you’ll find another dead soldier. Lying in the dirt next to whom is the ninth letter.

Locating letter ten requires a bit of backtracking from the beginning of the next set-piece.

As soon as you regain control, following the previous cut-scene, pull a quick 190 and walk due west along the leftmost of the three paths you should see before you.

After a few paces, you’ll come across another ammo crate and the chapter 2’s penultimate collectible.

Acquiring letter eleven can be somewhat hazardous, unless you decide to demolish all three Flak guns first; in which case, you’ll have to act fast, as this section will end within a minute of completing your objective.

Regardless, the collectible you’re after is tucked away amongst a cache of spare ammunition behind the third anti-aircraft emplacement, at the rear of the eastern wall.

There are six more letters to be obtained during the third and final chapter of Tirailleur. The first of which can be found at the top of a dirt track leading up a small hill towards a campsite in the east.

A makeshift, one-person tent on the eastern edge of this camp houses the twelfth collectible, titled “Laughed and Loved”.

The next letter on your list is located within the neighbouring village. Or, more specifically, on the small stone wall of the wood shed situated to the rear of the adjacent orchard.

If you’re having trouble locating the wood shed itself, walk northwest from the front of the radio station until you reach the last building on this side; this small, vaguely square building is the wood shed.

#14 Which Direction is Home

Now head to the opposite end of the orchard towards objective A.

See that old-fashioned piece of farming machinery? Its vibrant red and green colouring makes it pretty hard to miss. Next to the right wheel is a wooden crate and, more importantly, the fourteenth epistle in your burgeoning collection.

Continue east-southeast from this position, walking through the woodland clearing until you reach a parked truck.

In front of the truck as you face it is another stack of crates, on which the next letter rests.

We’re skipping ahead now to the final section that takes place immediately after you’ve successfully captured the Western Bastion.

In the distance you’ll notice a rather sumptuous-looking chateau, while directly in front of you is another small orchard and some kind of equipment shed/makeshift office.

The penultimate letter sits neatly atop a table inside this building, but be warned; a well-placed shell will decimate the structure the second you pick it up.

Helpfully, the seventeenth letter can be found only a stone’s throw away from the now ruined shed, secure within one of the buildings situated on the periphery of the grand chateau to the northeast.

Find the one with the green door, head inside, and locate the ground floor room at the back of the house (the one that’s mostly empty save for a discarded white sheet and a covered sofa).

A preliminary scan of the surrounding floor space should yield up the desired envelope.

Your letter collection should now sit at exactly 40 – not bad, considering you’ve had to fight off waves of enemy soldiers in between finding these errant epistles.

We’ll be back before the end of the year with the fourth and final guide in our series; this one, covering DICE’s latest War Story, The Last Tiger.