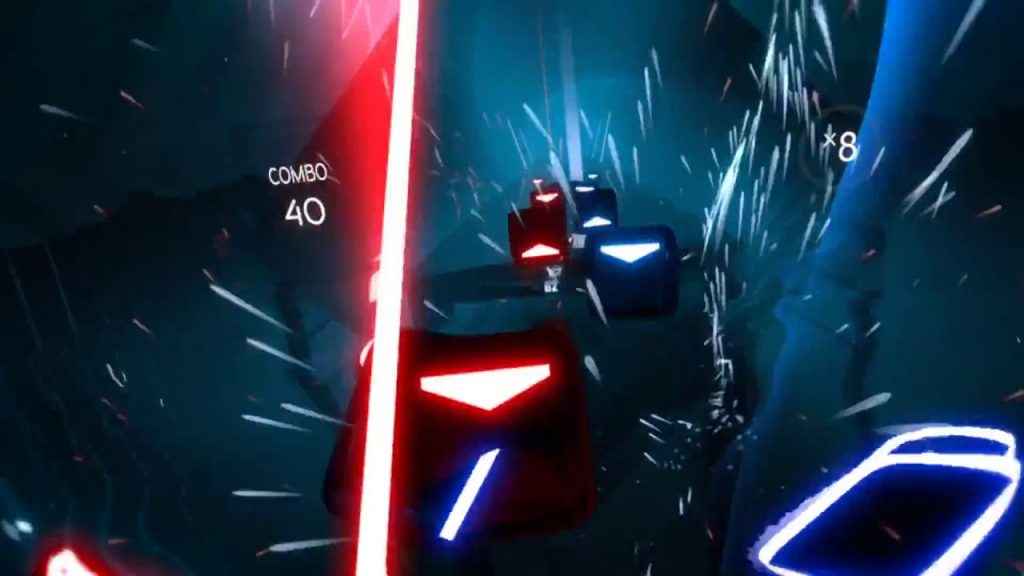 Rather excitingly, the PSVR version of the game, which originally released in May, also comes with a raft of PlayStation exclusive content in the form of five new songs.

Everyone loves Beat Saber’s original game soundtrack. That’s why we bring you, above our well-know music hits, five new exclusive songs from excellent electronic dance music artists and talents from around the world.

Finally, Hyperbolic Magnetism has confirmed its top priority going forward is to support the game with fresh new content. This begins with the release of the Beat Saber’s first expansion pack soon after the PSVR release, which introduces ten additional songs. Lovely stuff.

Beat Saber is a great game if you want to dance, play and shed some calories at the same time. It has very simple gameplay; you just need to slice blocks before it reaches you. Each block is in sync with the song’s beat and rhythm.

You will need VR motion controllers to control the red (left hand) and blue (right hand) lightsabers. You slice the blocks with the right color and direction shown on the screen. Slice blocks with dots in any direction. Be careful with mines and obstacles though as the right timing and accuracy gives you points. Beat Saber PS4 What to Expect

Here’s a list of fun things you can do with Beat Saber PS4 VR. We also added some tips for scoring more and other game features you should know:

As of June 10, 2018, PlayStation just announced in their official website that Beat Saber is coming to PlayStation VR. They even posted a thrilling trailer of it. Though there is no specific date yet, this announcement is great news for the gaming community.

Keep on checking out our Beat Saber updates here. We will make sure you’ll be the first to know once the Beat Saber PS4 release date is out!