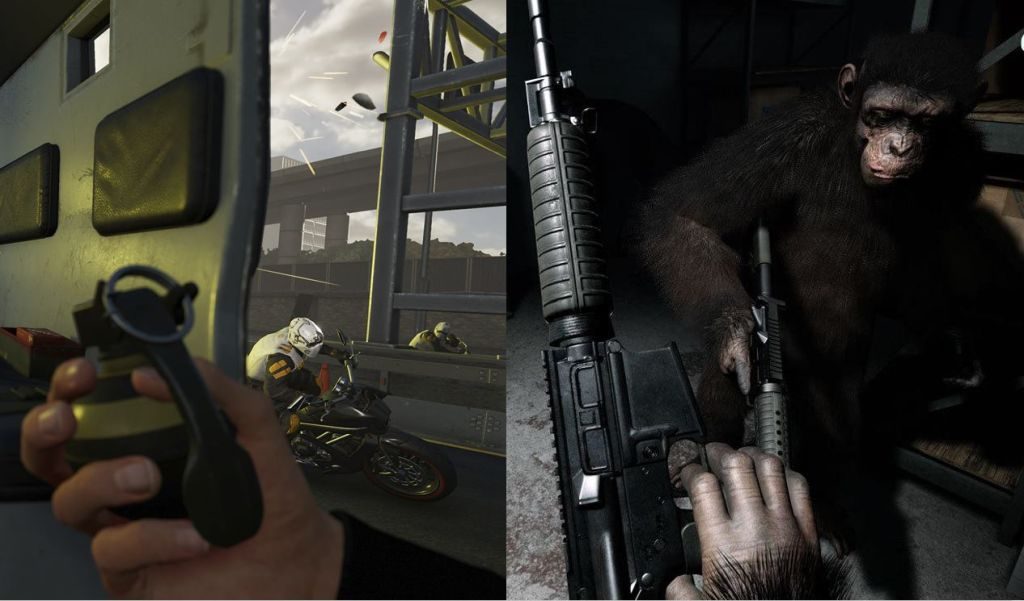 In these early days of VR gaming, every VR title released is interesting. While not every game is a success, you never know where innovation will spring from. Sometimes, the most abject failures can inspire tomorrow’s greatest successes. And that’s what I think happened with Blood and Truth and Crisis on the Planet of the Apes.

I was about halfway through my first run at Blood and Truth for review when it struck me. It had been nagging at the back of my mind for an hour or so. Something about the way I was slapping my shotgun into my back holster was triggering and old muscle memory. I kept trying to get my weapon to stick in place and missing the sweet spot, and then I finally did it right and thought “Oh yeah, that’s how you do it.”

Except that I had never played this game before.

I was grabbing ammo and slapping it into my weapon, ducking behind cover in a crowded warehouse, popping up and blasting dudes in the face, and all of it was giving me the strangest sense of deja vu. As though I had done it all before – a lot.

It wasn’t until the portion of Blood and Truth where hero Ryan Marks ends up climbing on the rails outside of a building that it hit me in the face like an aluminum baseball bat.

Oh my God – this is Crisis on the Planet of the Apes.

Crisis on the Planet of the Apes was a game that I spent a ton of time on when it released in April of 2018. In the lead up to the game’s release, I played through a beta version (which I found frustrating and tedious), interviewed FoxNext VR’s VP Brenden Handler (which was enlightening and gave me insight into the game’s development), and then played the final release for review (much better than that crazy difficult beta).

I was one of the outliers on Crisis, enjoying the game far more than other reviewers, who ended up saddling the title with a wretched 49 on Metacritic. Though to be fair (and I discussed this in my review), I was predisposed to enjoy the game.

But my opinions of Crisis on the Planet of the Apes aren’t the point. The point is that Crisis shares some very real gaming DNA with Blood and Truth. Sony London Studios’ critically acclaimed blockbuster flagship plays – at times – exactly like FoxNext VR’s critical failure.

And I mean exactly. If I had never played Blood and Truth, and you showed me screenshots of some of the warehouse scenes, I would just said “Oh, that’s Planet of the Apes”. Storing weapons on your back (with the exact same mechanism)? Check. Reloading mechanism? Check? Moving from point to point while ducking under cover? Check. But all of this could just be coincidence until you get to the climbing.

The moments when Ryan Marks goes all Nathan Drake and skitters up scaffolding feel so much like Planet of the Apes that I was forced to wonder if Sony London Studios’ had licensed the engine. At one point, Ryan Marks actually says “I’m going to look like a chimpanzee by the time I’m done with all this climbing,” which I took as London Studios’ sly wink towards the game they were aping (See what I did there? I’m super proud of that one.)

To be very clear, I have no inside knowledge about any cross-over between these games or studios. After the release of Crisis on the Planet of the Apes, FoxNext VR went radio silent. All mention of Apes has been removed from FoxNext’s website – though you can still pick it up via the PlayStation Store. Though some trophies for a Predator VR game (likely a FoxNext project) leaked online a few weeks back, there has been no announcement and the rumor mill has settled back down. FoxNext VR has been very, very quiet.

Did London Studios actually license parts of the Apes engine from FoxNext? We will likely never know, but I doubt it.

Were the devs at London Studios inspired by Crisis though? Almost certainly. And there is absolutely nothing wrong with that. Shooters all use the same control scheme, dungeon crawlers all feel the same; why can’t cinematic VR shooters use similar mechanics? Part of why I gave Apes such a high score in my original review was because it was so innovative with its control scheme. Why not polish it up and use if for a high profile release?

Crisis on the Planet of the Apes got a bad rap. If FoxNext VR had the time, resources, and marketing budget of the Blood and Truth team, Apes would have likely made a much bigger splash in the VR marketplace. The fact that it sunk like a stone can’t be rectified at this point.

But if you enjoy Blood and Truth, and you want to take a look at another cinematic shooter – though one produced on a much smaller scale – you might be interested in checking out Crisis on the Planet of the Apes. It’s not the most polished game on the planet, but there is no doubt in my mind that you will see what I mean.

You never know. Some of your favorite VR gaming mechanics may just have evolved from Apes.