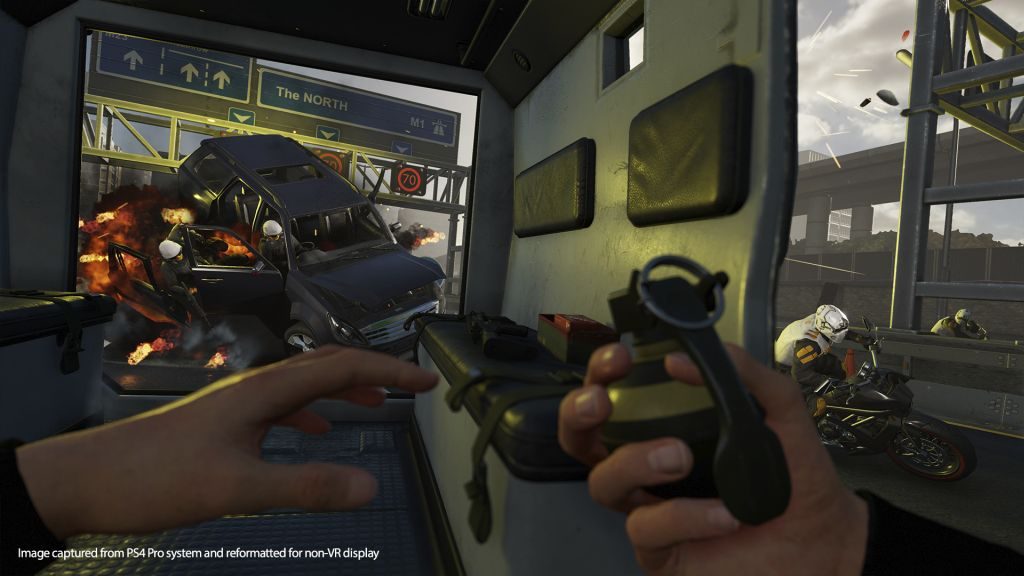 Sony’s current PSVR flagship effort Blood and Truth has finally arrived, after years of teasing a follow up to the “London Heist” segment on VR Worlds. While Blood and Truth doesn’t break any new ground mechanically, it is still a lot of popcorn-chomping fun, with top notch storytelling and some great water cooler set pieces – some of which contain no action at all. Blood and Truth takes a surprising number of chances, and in doing so, turns many expectations on their ear.

Is This Action, Art, Or Something Else?

For a game that is being sold as an action title, there are a surprising number of quiet moments in Blood and Truth. One bravura segment in particular – near the midpoint of the game – made me realize that I was experiencing something unusual, and that the game’s designers were interested in delivering something more than high powered bang-bang.

Around the mid-point in the narrative, player character Ryan Marks and his fun-loving brother Nick break into an art museum that is under the patronage of bad guy Tony Sharp. Tony has filled the place with interesting modern pieces, in an effort to see less like a gangster, and more like a decent member of society. The brothers are seeking information on some mysterious shipments that have been made using the museum as cover.

Instead of shooting their way through a bunch of bad guys guarding the museum, Ryan and Nick encounter…no one. In a fascinating segment that lasts 15 minutes or so, the duo proceed to clown their way from room to room to the heart of the museum, committing random acts of vandalism while simultaneously admiring the admittedly impressive displays.

There is so much fun and character packed into this sequence that the very idea of having a gunfight in this setting becomes abhorrent. Blood and Truth – for all of its action movie roots – takes time to breathe, letting you spend time with its characters as human beings instead of gun-wielding superheroes. In doing so, it comes far closer to feeling like a living film than most other games of this nature.

The Dirt Is In The Details

For all of the hype around the development of Blood and Truth, what we actually ended up with is a light-gun shooter – albeit a pretty good one. Players watch fairly long (but extremely well-acted) cut scenes, then move to a new location and shoot the place up. But the presentation of the story, along with the fact that the performances are so damn good, prevents Blood and Truth from actually feeling like players are being shuffled from level to level.

The shooting is fast and fun, and the settings and weapons change often enough to keep things feeling fresh throughout. But where Blood and Truth really excels is in the way it delivers little details. Production value is sky high here, and moving through giant environments like airport hangers is deeply impressive in VR. Little knick-knacks are scattered about for collectors to seek out – including small statues representative of the various games included in Sony’s VR Worlds – a nice touch.

Tossing crumpled papers into mini-hoops installed on trashcans causes a little celebratory light show. I spent several minutes at a shooting range tossing bottles into the air and trying to shoot them – finally succeeding, much to my delight. And – in perhaps one of my favorite little touches – players can inhale on a vape machine (or a cigar) and blow smoke back out. The PS VR microphone picks up on the sound of the player exhaling, and times the smoke accordingly. Slick and smart, and a sign of the thought that went into this game.

The Characters Are Great, Even If The Story Is Standard

The story in Blood and Truth feels very much like that of a boilerplate action film, for better or worse. After a bracing military mission that very nearly goes off the rails, hero (or is he an antihero? He sure kills a lot of dudes…) Ryan Marks is summoned back home to London. His father has died of a heart attack, and the family business is being muscled in on by the Sharp brothers – local hoods turned crime lords.

Ryan and his family decide not to take this incursion sitting down (though its never quite clear what the family business is, it is implied that they are criminals of some sort). Before long, they have sparked a crime war in the streets of London. As the guy with military training, Ryan is pretty much the point man in the war, taking on all of the most dangerous missions himself.

The story takes a few twists and turns from there, but nothing happens that fans of crime fans won’t be able to predict. But where Blood and Truth excels is in its characters. Much like VR Worlds’ “The London Heist”, the characters have real presence. The actors inhabiting these roles come shining through all of the zeroes and ones, to reveal the humanity behind them.

The developers deserve some credit for the realistic characters as well. At one point, I rocked back and forth in my seat, watching the eyes of a character follow me to maintain eye contact. The effect was eerily effective. Though I played on a standard PS4, I did wish mightily for a Pro in the moment when I was struggling to read the tattoos on a characters arms while she was leaning in close. The fact that I cared enough to try was telling.

Blood and Truth Might Not Be What You Are Expecting

Looking at the trailers for Blood and Truth, one might be under the impression that players will be able to run freely through the environments, running and gunning as they see fit. This is not the case.

Instead, destination points are presented as nodes scattered about the room. Usually the destination points have good cover, and the player is able to choose where to go by looking at a point and selecting it. Ryan Marks will then run to that point, allowing the player to freely shoot along the way. At certain points, the game takes over, putting the player on rails and hurling them forward through the environment while they gun down tons of enemies.

Ammo and additional weapons are scattered about on certain points, and the occasional branching path lends a bit of replay value for players that want to see everything. What you can’t really do, however, is move backwards. Once you move past a point, that destination disappears, so be sure you want to move forward before you displace.

This method of motion works fine in practice, but those that are looking for a free motion shooter will likely be disappointed. This just isn’t that game. However, this method of motion is entirely free of any hint of motion sickness, and once you realize the dynamic in play you settle right into it.

One And Done? Not Quite…

There is some replay value to Blood and Truth. Once the game is over, you are able to dip back into any of the twenty or so missions for trophy and collectable clean up – something that I spent a bit of time doing when I realized that I had hastily deprived myself of certain plot points by shooting people instead of just letting them talk.

You can also run back through the game on a higher difficulty, and spend some time honing your skills in various training areas. Speaking of difficulty, no one – and I mean no one – should consider playing Blood and Truth on “Cinematic” difficulty. I am the biggest shooter failure on the planet, and I had no problems at all on the default difficulty. I am a full supporter of easy mode in games (I love it, in fact), but there is just no reason to go easy in Blood and Truth. You might as well just watch the game on YouTube.

I made it through the story of Blood and Truth in two sittings, so maybe about five hours, but I am a naturally slow gamer, prone to poking around and standing still to look at stuff and take in the view. But be ready to allot some dedicated time, because once the back third of this game gets moving, you won’t want to stop.

Part of the marketing for Blood and Truth tells players that they will “feel like an action hero”. Once the game really took off, I absolutely did. There are some moments in Blood and Truth that are absolutely jaw dropping, and the game presents some images and moments that I simply have never encountered in VR before. In many ways, Blood and Truth signals what VR games will be like when studios finally stop pussyfooting around and make games with actual budgets.

The mechanics of Blood and Truth are solid but familiar, but the storytelling, characters and production value make it feel like we are catching a glimpse of the future of gaming. There is nothing wrong with taking known game mechanics and grinding them to diamond-sharp finish. Blood and Truth is not a revolution in VR gaming, but it is a fun game, and damn it, we need more of those.

Blood and Truth takes known VR gaming mechanics and inserts them into a delightfully well-realized London, sending the player through chase scenes, heists, and gun fights. While there is nothing revolutionary happening with the controls and gameplay, the presentation, story and characters are top notch. Once you get started, you will want to see the action-packed story through to the end, and that’s really what we wanted, isn’t it?