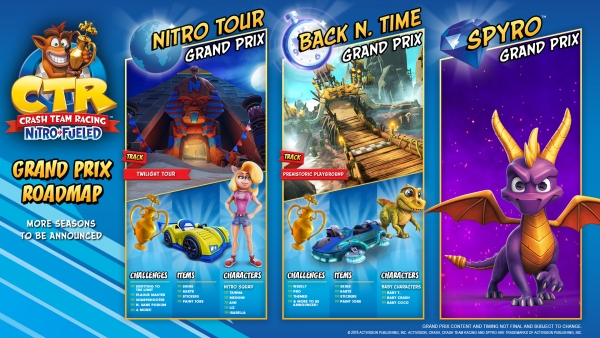 The Crash Team Racing Nitro-Fueled DLC is based around the Grand Prix, which is a themed season comprised of a new track and different challenges to take on. If you beat a challenge, you’ll net yourself Nitro Points, which upon reaching a certain level, unlocks rewards including new characters, karts, skins, and customisation items.

Grand Prix challenges also allow you to hoover up Wumpa Coins, which can be spent at the in-game shop, the Pit Stop, for fresh content. Furthermore, the Pit Stop will be kitted out with new items during each Grand Prix, such additional characters, kart sets, wheels, paint jobs, decals, stickers and more.

The first Grand Prix will launch on July 3, and features a reimagined Ancient Egypt and Arabian Town from Crash 3: Warped called Twilight Tour. Players will also be able to unlock Tawna the Bandicoot during the first Grand Prix, providing you earn enough Nitro Points.

Crash Team Racing Nitro-Fueled is due for release on PS4, Nintendo Switch, and Xbox One on June 21.