Destiny 2 is an ever-changing and ever-evolving game. Along with exciting new content updates, developer Bungie was also inducted into the PlayStation first-party family this year. Because of this, Destiny has been thrust into the spotlight more so than previous expansion releases.

With more eyes than ever on the shared-world space shooter, some may want to dive in for the first time or return to see what has changed in the past few years. As this new expansion launches, new and returning players will join the fray. Some players may feel overwhelmed with what to focus on post-Destiny 2: The Witch Queen, so this guide will help streamline your leveling and grinding process.

In the next section, I will be going into more detail on the differences between Power levels, Seasonal levels, and activities. For those who are interested in a more streamlined guide:

These five steps will help you quickly get to the Power level cap to ensure you have access to all end game content. When hovering over a weekly activity, you will see what reward it will offer. Pinnacle rewards should be saved for when you’re close or above Powerful cap. It’s also worth noting that there are Powerful and Powerful tier 1, 2, and 3 rewards shown on the directory. The (tier) signifies how many levels above soft cap these rewards will drop.

What are Seasonal and Power Levels?

Depending on when you last played Destiny, you know the level system was always something that took some getting used to. Like in many MMOs and RPGs, your Guardian had a level to signify how strong they were and what content they could access. A

long with that, there was also a Power Level (formally known as Light Level in original Destiny) that did roughly the same thing but was more focused on how strong you were versus other Guardians. However, this is no longer how Destiny’s levels work. 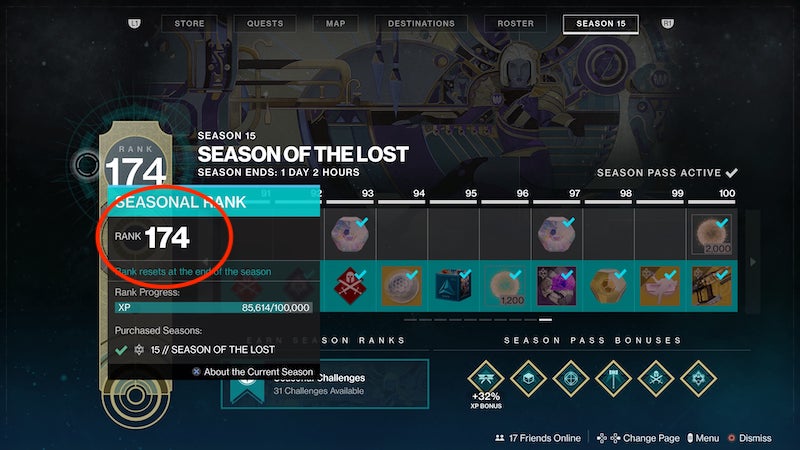 This system has been streamlined since the launch of Beyond Light last year. Guardians no longer have a base level but rather a level for the season. Your level is reduced back to zero at the beginning of each new season. Levels are there to show how much you have played during a season.

These levels help seasoned Guardians gauge how new/experienced a guardian is in the seasonal activity, which also changes each season. However, this is not necessarily a good way to see a Guardian’s experience with the game as a whole.

Your seasonal level will increase through experience and, like most live games, will unlock rewards on a season pass. A free and paid version of the seasonal pass can be obtained seasonally or with a yearly season pass. These rewards will grant you emotes, gear, weapons, and materials. However, the real prize from purchasing a season is the Seasonal Artifact.

This item, which levels from experience, will grant you Artifact unlocks and increase your Power level. The Power level is the most accurate way to know a player’s strength and will be the gate that locks certain activities out for being too difficult.

Seasonal Artifacts are Bungie’s way of giving players avenues to end game content, even if they don’t grind every activity. A lot of content in Destiny is locked behind Power Level caps. Nightfalls, Grandmaster Nightfalls, Raids, Dungeons, and seasonal Exotic Quests will have a recommended Power level attached to them that players will have to reach so they don’t get crushed by everything in the activity. 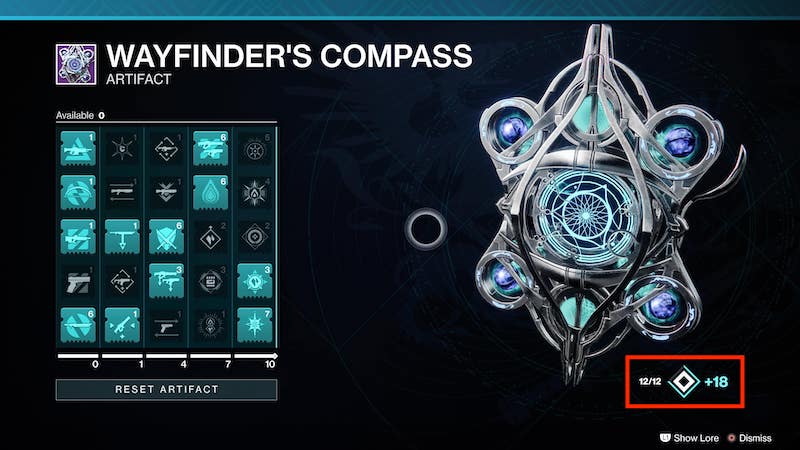 This is where the Seasonal Artifact helps. Many players don’t have the time, or means, to invest hours upon hours into Destiny to grind up levels. Therefore, the Artifact of each season will endlessly add one Power level each time it increases in level. This means that even if a player doesn’t hit the Power cap of the season with gear, they can still access end game content with the Power boost the Artifact brings.

As shown in the picture above, the Artifact also has mods you can unlock that last through the season. Some of those mods previously include Focusing Lens or Disrupting Blade, one of six mods used to take down Champion opponents. In the highlighted red box in the picture, you will notice two diamonds. 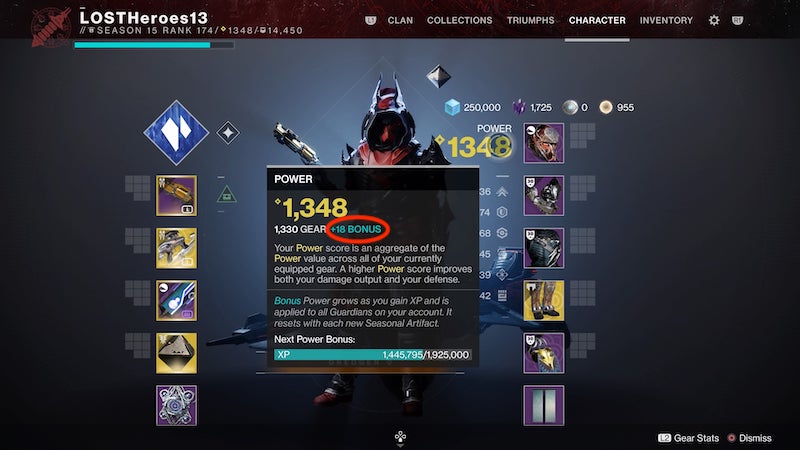 For returning players, the chances are high that Destiny has changed a great deal since the last time you have played. Bungie doesn’t want to punish friends of new or returning players by forcing one group to play low-level activities before getting to the new and exciting content.

With that said, all players who are currently too low for the start of a new expansion will get automatically boosted to the new base Power recommend starting The Witch Queen campaign. 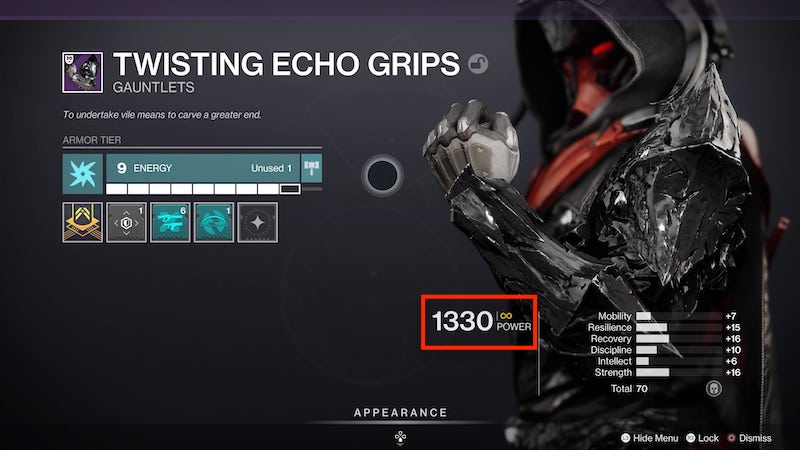 For these players that are too low in Power, you will receive rare gear and weapons to make sure you can jump straight in. From this point, I recommend players progress through the campaign normally. This allows you to get introduced to Destiny at the lowest stress level and enjoy the story being presented. Once complete, you can progress into the seasonal story and activity.

After completing all the missions, you should be close to the soft cap at 1500. If you’re still off the mark, running any activity will continually drop new pieces of gear that are higher Power levels until you reach 1500. Once you achieve this, your next step will be running activities that reward Powerful engrams. 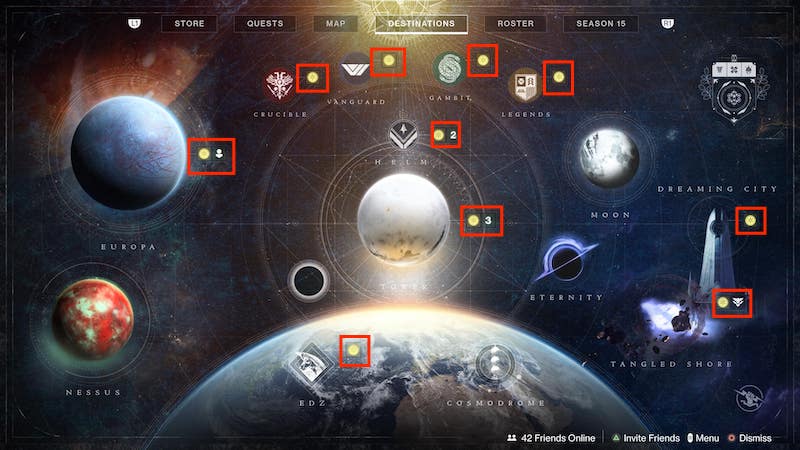 This is where most Destiny players are racing to get. Once at 1550, many Guardians will focus on hunting specific weapons rolls or armor with stats that correspond well with their play style. No matter what you choose to do, there is always something for Guardians to hunt.

Destiny 2 is massive, and that demands a great deal of time. However, with recent updates and changes, Bungie has managed to make it so that no matter when you choose to jump back in, it’s never too late or difficult to get up to speed.

This guide is less about how to level and more about what I feel you should invest time into and when to shift gears. The Witch Queen, like any expansion, is a perfect place for new and returning Guardians to jump back in. Keep your eyes out for our review of Destiny 2: The Witch Queen.