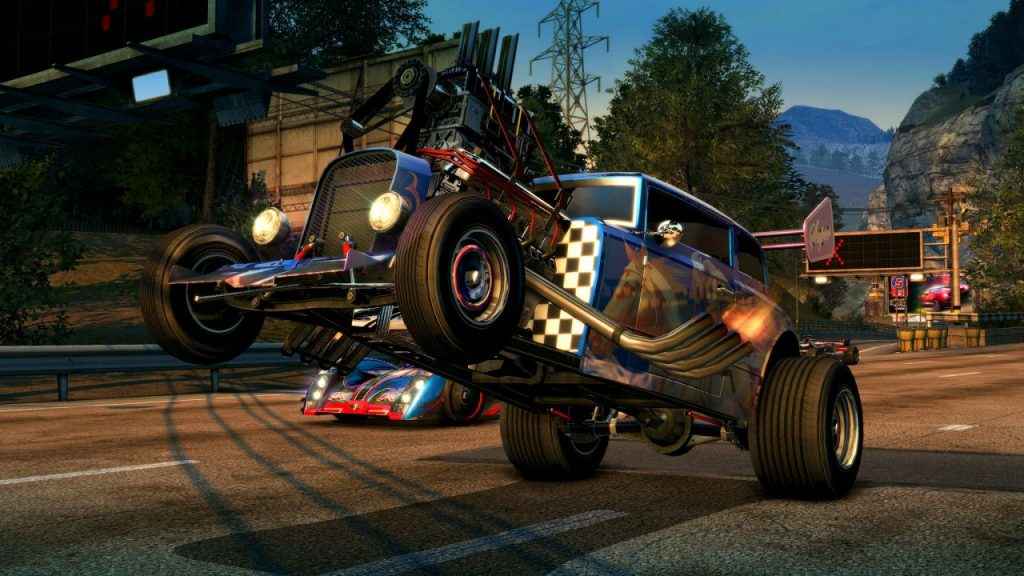 When you hear the warm and familiar strings that usher in Guns N’ Roses seminal hit Paradise City in 2018, one of two fairly awesome things are likely happening. The first, is that you've (somehow) blundered into a semi-decent rock club somewhere that remembers what decent rock music sounds like in lieu of the screamo shite that so often violates the eardrums in such places. Or, it could be the second; that the swine have somehow taken flight and EA has *finally* realised that a re-release of Burnout Paradise is not just a good thing, it's a Bloody Good Thing, and something that the gargantuan super publisher probably should have done years ago before they ended up on more anti-consumer lists than United Airlines.

So yeah it's happening, and it's happening soon (March 16th in fact). Yep, that's right; by this time next month those of us with a thing for good games will all be playing Burnout Paradise Remastered on our PS4s, while a select few of that group will be in perched in their ivory PS4 Pro towers, playing 2008's best racer in 4K at 60 fps.

It almost seems too good to be true, doesn't it?

Now, as with most things, the announcement was largely greeted by barely contained excitement (Burnout Paradise is literally better than your mum after all), but running concurrently with such unrestrained and unfettered joy were the few naysayers who were racking up the snark points by decrying that [INSERT BURNOUT GAME HERE THAT ISN'T PARADISE BUT PROBABLY BURNOUT 2] is the best of the series and should have been ported instead.

And well, they have somewhat of a point. Burnout 2: Point of Impact was a tremendously streamlined and muscular arcade racer and one which boasted a very singular focus that resulted in arguably the best genre effort of the PS2 era. As it is though, and for a second let's completely ignore the substantial merits of Paradise's sublime handling model, it's clear that Burnout Paradise's focus on online community play, exaggerated visual bluster and open-world design was always going to appeal more to the uninitiated (lest we forget that Burnout 2 released nearly *16* years ago now).

So now we have that out of the way, let's not ignore the substantial merits of Burnout Paradise's wonderful handling, eh? For a start, every single vehicle in Paradise, from the hefty, hulking chassis of the muscle cars to the ultra-thin frames of the sleekest supercars, all of them, handled with the sort of effortlessly and immediately responsive verve that made Burnout Paradise the CoD of racing games before CoD was the CoD of CoD.

It wasn't just the handling either, perhaps moreso than either Burnout Revenge or Burnout Takedown before it, Burnout Paradise was absolutely and positively white-knuckle fast. The sense of speed when you're tearing along the road was eye-opening by itself; punch the nitrous however, and reality seemingly warps around you as the vanishing point is pulled into a tight tunnel of flickering trackside detail and competing vehicles are stretched out seemingly far beyond their regular dimensions.

And then there were the crashes – and I don't mean the blue screen kind, either. A furious meeting of metal on metal, the high-speed vehicular love-making that the various automobiles of Paradise's cast would get up to was nothing short of mesmerizing. From the excruciating slow motion of the collisions themselves to the sophisticated physics and damage modelling systems that underpinned such violent spectacle, wherein a showroom quality car can be instantly reduced to a twisted husk of scrap and haggard disfigurement, it was clear that no other game (even to this day) knew how to destroy beauty quite like those nihilistic folk over at Criterion.

In the end, it’s not just the knock on effect that the commercial performance of Burnout Paradise Remastered might have on future remasters. It's not even the prospect of resurrecting the Burnout franchise at large (as admittedly pant-wetting as that would be), it’s something simpler than that; it’s the return, as unlikely as that seemed previously, of one of arcade racing’s most beloved luminaries.

Burnout Paradise Remastered is like a time capsule you've dug up in your garden, a cynic-free throwback to a simpler time where joy was much easier to come by; a time where EA didn't require a constantly changing and identity bereft Need for Speed title every year to fill a Burnout-shaped hole and more crucially, a time where players encountered one of the finest arcade racers in years.