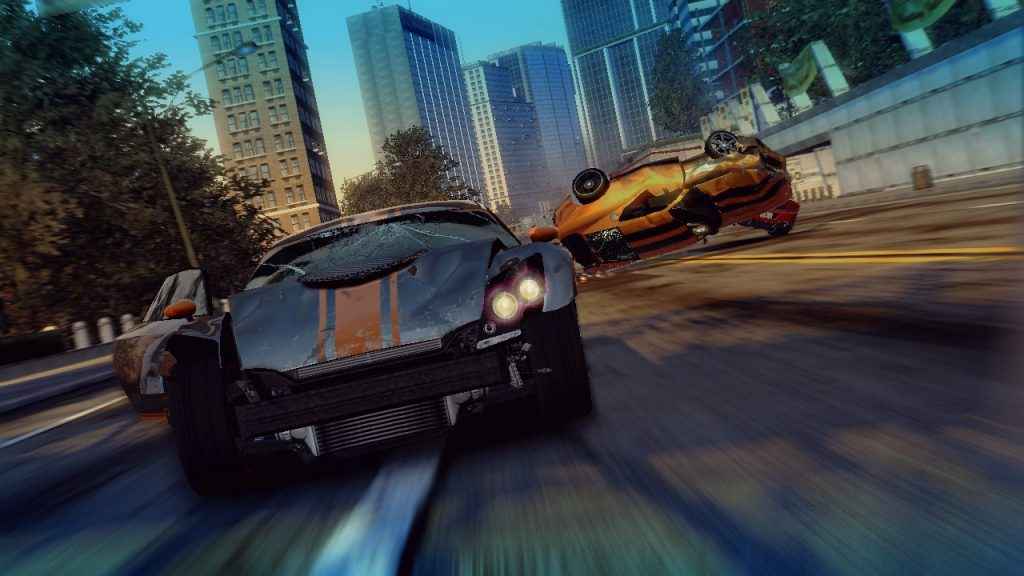 The Burnout Paradise Remastered PS4 release is tomorrow, March 16, but you can now preload the racing game so there's no hanging around! The preload file weighs in at 7.831GB Burnout Paradise Remastered was officially confirmed by Electronic Arts in February and features upgraded visuals and framerate. There’s not much more to it, but it’s the Burnout Paradise we remember with blisteringly-fast races! We’ll have our review live shortly, but at the moment we’re loving it. In the meantime, check out our Burnout feature following we wrote:

“Burnout Paradise Remastered is like a time capsule you've dug up in your garden, a cynic-free throwback to a simpler time where joy was much easier to come by; a time where EA didn't require a constantly changing and identity bereft Need for Speed title every year to fill a Burnout-shaped hole and more crucially, a time where players encountered one of the finest arcade racers in years.”

There’s also an excellent graphics comparison so you can see how things have changed.

? Take us down to the Paradise City, where the grass is Remastered and the game looks pretty…? What we don’t know is which retailer this is from, or who took the photo, so there’s a chance that it could be fake. However, it’s not the first leak. Earlier this year, developer Criterion seemed clean to talk about its racing again earlier this year following its 10 year anniversary.

Happy Burnthday BP! Burnout Paradise is 10 today! Why not spin it up today and beat a few Road Rules? pic.twitter.com/HLUdfTmIcv

A Burnout Paradise Remastered release for PS4 also received a recent full listing at online retailer Base.com. The racing game is listed for release at £34.99, though the release date differs from the previous one that was leaked.

Base.com lists the game launch as March 30,2018. No further details are given. If a new listing is to be believed, it looks like that a Burnout Paradise HD Remaster release will shortly be a reality.

You might recall that before the holidays Brazilian games outlet Gamespress reported that suppliers had set a date of March 1, 2018 for a Burnout Paradise HD Remaster release, so a Japanese release in March certainly seems likely.

As far as the rest of the world goes, we would be very, very surprised not to see EA follow through with a worldwide release given just how well the popularity of Criterion’s final Burnout title has endured.

The news of a Burnout Paradise Remastered release also raises other questions too. One such query concerns the licensed music contained in the game; from the iconic ‘Paradise City’ opener performed by Guns N’ Roses to a whole raft of other classic beats, the original PS3 release of Burnout Paradise boasted some of the finest gaming tunes around.

As such then, it would be a shame to not see all of the music make to the Burnout Paradise HD Remaster release fully intact. After all, it’s worth remembering that Rockstar themselves fell foul of the music licensing demons when Grand Theft Auto: San Andreas was re-released on PS4 and turned out to be missing a large chunk of the great music that was present in the original PS2 release.

From a wider perspective, the Burnout Paradise HD Remaster release also raises the topic of how EA’s stance on remasters may have changed, since the mega-publisher previously stated that they would rather work on new games rather than re-releasing older ones.

Given the goodwill that EA invariably needs to claw back after the loot box controversy swirling around Star Wars Battlefront II, and assuming that the Burnout Paradise HD Remaster release does well, we could well start seeing HD releases for other popular EA franchises too, such as the Mass Effect and Dead Space trilogies for example.

In case you missed it first time, Burnout Paradise was the final entry in the Burnout series of racing games that were developed by UK based studio Criterion. Placing an emphasis on frenetic arcade gameplay, vehicle destruction and blisteringly fast racing, Burnout Paradise took the series into open world waters for the first time, providing players with a massive city to roam around in, missions to complete and other online players to race against.