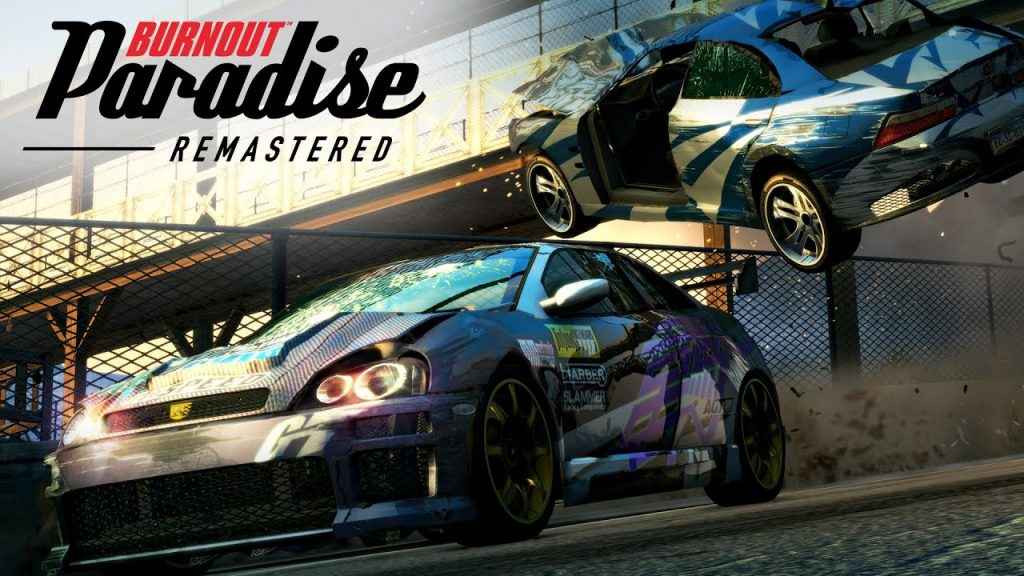 For those who have been unfortunate enough to miss out on Burnout Paradise first time round on PS3, the premise of Burnout Paradise is gear-grindingly simple; you begin with a car on a sprawling open-world city map and must cut around the place smashing other cars into smoldering wrecks, discovering races and other events in order to unlock better vehicles and progress your way through the game.

What that largely reductive and rudimentary descriptor doesn’t cover though, is just how accomplished the whole experience feels and in spite of the decade that has passed since its release on PS3, Burnout Paradise Remastered has aged like a fine wine simply because in those intervening years there just hasn’t been anything else quite like Criterion’s final Burnout title.

At their core, the entries in the series that preceded Burnout Paradise were all about high-speed racing and taking down opposing vehicles with spectacular crashes; they were the very epitome of straightforward blisteringly fast and attractive arcade racing. What Criterion did with Burnout Paradise however, is take that design DNA which for years marked the franchise as something utterly unique and transplanted it into a open-world setting that, when the game released in 2008, highlighted Burnout Paradise as an effort that was very much ahead of its peers, even if many folks at the time simply wanted more Burnout 2, 3 or 4, rather than the evolved take on the series that Paradise prescribed.

In truth, the shift away from the largely linear rat-run courses of previous Burnout titles proved to be a boon as the open-world environment in which Burnout’s furiously white-knuckle brand of vehicular carnage takes place in permits a great deal of creative latitude on the part of the player. In a point to point race for example, you must obviously go from point A to point B, but the route is never prescriptive; instead you can decide (often on the fly) how you reach your destination by taking whichever roads, alleyways and any other shortcuts you can find to beat the rest of the pack.

In addition to the standard point to point races and regular racing scenarios, Burnout Paradise Remastered also brings back the fan-favourite Road Rage events from previous games where the object is to smash up as many competing cars as possible within a stated time limit and also the Marked Man event where players must escape to a point on the map all the while a group of enemy cars are hellbent on turning them into a husk of twisted metal and regret before they get there. Throw in the Showtime mode where you can turn any junction into a car pile-up (not unlike the Crash mode from the earlier Burnout games) and multiplayer functionality for many of the race types, and it soon becomes clear that Burnout Paradise Remastered doesn’t really take itself too seriously at all and is arguably all the better for it.

Whether you’re exploring the nooks and crannies of the map by screaming down the highway at 200mph in a sleek sports car, or nitro boosting a pickup truck high into the sky before crashing down through one of the many billboards strewn around Paradise City, the open-world framework that ostensibly defines Burnout Paradise Remastered ensures that no player will approach the game in the same way and it’s this freewheeling approach to game design that, especially today, deserves to still be celebrated.

In the current climate of grindy progression and padded goal-setting, it’s refreshing to re-discover just how brilliantly judged the progression curve is in Burnout Paradise Remastered. Thankfully resistant to the idea of micro-transactions or any other such craven variant on in-game purchases, the crux of progression in Burnout Paradise Remastered instead evokes an earlier and much less cynical time where, rather than reaching into your pockets after you’ve already forked out for the game, you need only win races to unlock new missions and vehicles; what a radical school of thinking eh?

And then there’s the soundtrack, oh my lord, that soundtrack. A largely officially licensed affair, players will be happy to know that the entirety of the groundbreaking soundtrack from the original release of Burnout Paradise on last-gen consoles has made the cut here, as artists such as Guns N’ Roses (oh my days those soothing opening strings of Paradise City), Killswitch Engage, Depeche Mode and more are all present and accounted for and contribute to a rip-roaring audible euphoria that brilliantly supports the on-screen action.

Of course, I would be remiss to waffle on about Burnout Paradise Remastered without speaking about the ‘remastered’ part, and so it is with some relief indeed that I can confidently say that port house Stellar Entertainment have done a cracking job of bringing Burnout Paradise up to date on both PS4 and PS4 Pro. Aside from a sizable boost to resolution – 1080p on PS4 and checkerboard 4K on PS4 Pro respectively, Burnout Paradise Remastered also screams along at a super solid 60 frames per second on both platforms along with a number of subtle improvements to texture and trackside detail thrown in for kicks.

Clearly then, this is the absolute best that Burnout Paradise has ever looked and while the game doesn’t quite boast the sheer array of shiny, photo-realistic effects that more contemporary racers such as DriveClub and Gran Turismo Sport do, the sheer sense of speed and vehicular physicality that oozes out of every digital pore of Burnout Paradise Remastered remains utterly unmatched all the same. Beyond the new paint job afforded by its remastered label, Burnout Paradise Remastered also packs in all of the DLC that was released for the game previously, including the Bikes expansion pack, Cops & Robbers pack, Toy Cars pack, a slew of extra challenges and much, much more besides. To say then that there is a lot to do in Burnout Paradise Remastered would be quite the understatement.

Burnout Paradise Remastered is a soaring tour-de-force quite unlike any other and being able to experience the entirety of that original, white-knuckle thrill-ride in its definitive state justifies its newly re-released state alone. Burnout Paradise Remastered is nothing less than a triumph and confidently stakes its claim as the last breathtakingly great arcade racer of the modern era.

Look, it's really simple, Burnout Paradise Remastered is essential for fans of racing games everywhere. They just don't make them like this anymore (but they really, really should).