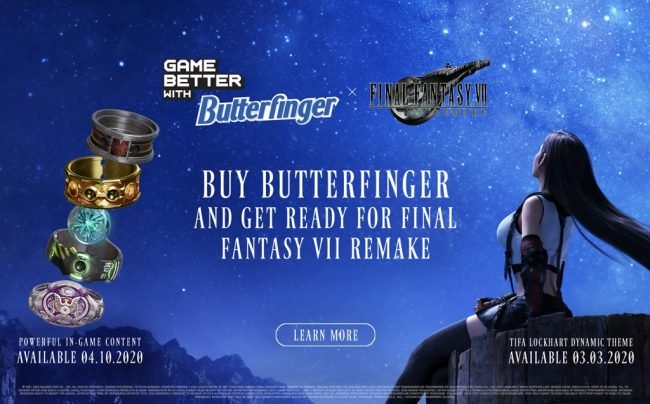 Square Enix has announced that Final Fantasy 7 Remake DLC will be available with purchases of various candy bars of all things, including Butterfinger, Crunch, or Baby Ruth. I mean, why not?

To take part, all you have to do is snap an image of your receipt and send it to Butterfingers, which will net you a digital code. The offer kicks off on March 3 at 12.00pm and will run until May 14, but will only be available in the US.

Get ready to take snacking and gaming to the next level with Butterfinger and @FinalFantasyVII Remake. Visit http://ButterfingerFF7R.com to learn more about how you can Game Better with Butterfinger. *While supplies last*

The rewards are as follows:

The above items can be equipped to any character in Final Fantasy 7 Remake, and are accessory items similar to what you found in the original game. What isn’t known at this point is if any of these DLC items will be made available outside of this promotion.

Final Fantasy 7 Remake is scheduled for release on PlayStation 4 on April 10, and will remain exclusive to Sony’s console for approximately one year.

Pleasingly, Square Enix has said that the game’s recent delay will not impact the release of the second part of the remake project.

Here’s lowdown on the game:

Cloud, an elite SOLDIER operative turned mercenary, takes part in an Avalanche operation to destroy Mako Reactor 1 in the city of Midgar.