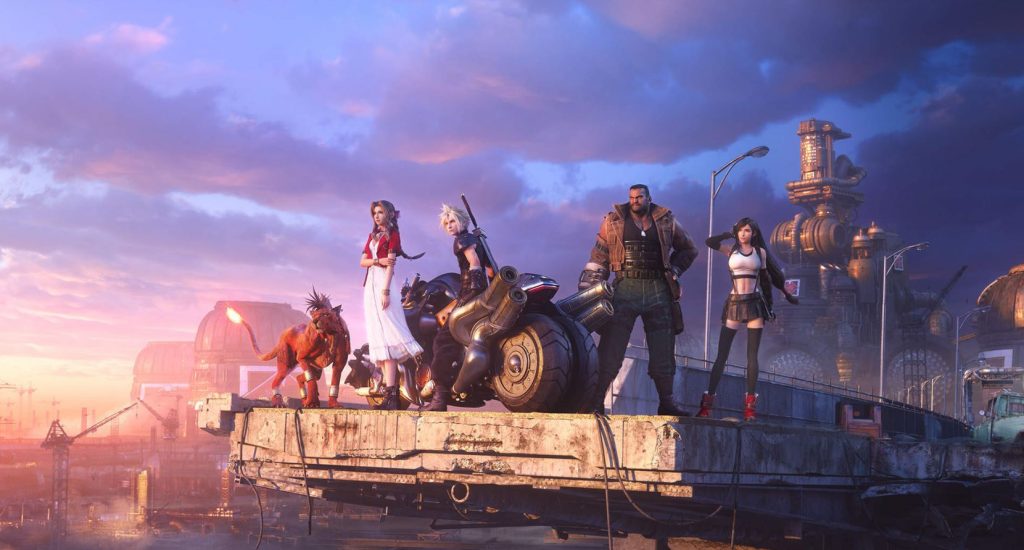 Final Fantasy VII Remake PS4 Review. In hindsight, I hate to say that I might have been one of two people on this Earth that wasn’t big into Final Fantasy VII. I always appreciated it for its place in gaming, and I basically knew everything that happened, but I just couldn’t get into it naturally. At the same time, Final Fantasy VII is a game that I have always tried to crack into, banging my head against walls at times, just to see what others see in it. Much like everyone else, my interest skyrocketed when Final Fantasy VII Remake was announced; I finally had another shot at the world, proper.

A New Path Down Memory Lane

Equally so, a great deal of pressure lies on the team behind Final Fantasy VII Remake, and for good reason. Anything so beloved needs to be handled with care, and who better than the majority of the original team that worked on Final Fantasy VII. One thing we all know is that nothing is certain in this world. Fortunately, though, some things are too good not to be.

What makes this remake so special is that it follows all the big narrative beats that take place in the original. At the same time, so much life and breath has been injected into those beats that they feel fresher than ever. Side characters receive due screen time as well as character building in wonderful and organically-delivered detail. I cannot say enough just how immersive the world became simply through seeing all these characters naturally live in it.

Empathy plays a significant part of the world. No longer is Shinra simply a massive corporation run by drones. Cloud and Co. encounter a handful of Shinra employees who openly support and love their work, but we also get to see these same employees outside of their comfort zone. They see the evils of their organization higher-ups and how they affect the world around them. The game also takes the time to show the disillusionment of these employees – as well as the general public in the same fashion – which all adds to the highly-developed world building that the original didn’t have the time or resources to generate to this level.

Going further than that, side characters that make appearances in the original receive similar treatment. In particular, Biggs, Wedge, and Jesse play significant side roles throughout the game. The hints at their lives in the original become full-blown side quests and exposures into who they are, how they see the world, and what they wish to do in it. Also, Wedge is best boy, and that’s not just because he loves cats.

This also means that the game becomes longer in the teeth. This is to be expected, since the development team plans to dedicate three entire games to this project. To me, I live for development like this. If I can get lost in natural characterization and organic world building, then I’m committed wholeheartedly.

Expanded areas feel so much more real and vivid, and the same goes for new featured areas. Everything gets its fair share of coverage in the steady pace that the game uses, and mini-games make their way back into the game as well. Hell, some new ones appear, and I cannot tell you how special some of them feel. On that note, I had endless hype for the Honey Bee Inn portion of the game, and I was still blown away by how wonderful it all was (please, go experience it for yourself).

One thing to consider in this is how linear the game is. Much of the time navigating felt like I was following those narrow paths and maps I remembered from Final Fantasy XIII. What makes this work so well, in contrast to XIII, is that the narrative sticks to its guns and doesn’t deviate or split. In that way, the linearity in Remake comes across more like Final Fantasy X.

Equally so, one of the more cumbersome aspects to the game was how long it felt running from place to place. Midgar is huge and dilapidated and gorgeous and rundown, but there is also a great deal of empty space between your points of interest. Between some more significant narrative beats, this pause in gameplay works to great effect, allowing you ample time to consider what you just witnessed. Other times, it feels like you’re waiting for the run to be over.

Since random encounters are no longer a thing, all of the fights you encounter are fixed in specific locations. This also means that long stretches of empty zones can’t be supplemented with combat. In contrast to this, progression flows naturally, so there’s no need for you to grind out levels in order to progress. I can attest to this, as I solely dedicated my 20-hour playthrough to the Main Scenario and skipped all of the 24 side quests along the way.

Fortunately for me, there was a way to return to past events and complete anything I didn’t do beforehand. No matter how you slice it, these side quests add extra content to the game as well as build further into the mythos, pathos, and ethos of the world around you. To boot, you have access to different difficulty levels, and playing through Hard rewards you with more tidbits into the world proper that you wouldn’t earn while playing on Easy or Classic. I personally greatly disliked the idea of Classic because the game fulfills all combat needs for you, but it makes for a nice addition for anyone who simply wishes to experience the game in its own right.

Homage To The Franchise

For each weapon you receive, you can apply different buffs and character enhancements to it. This also means that you must determine what each weapon’s specialty is. Magic weapons feature more magic-based stat boosts while melee weapons do the same thing with physical attacks. The greatest benefit to this strategy is that you can choose to stay with one weapon for each combatant as long as that weapon fits the way you want to play.

In fact, Remake rewards you for dedicating yourself to one weapon by allowing you to level up each weapon. With higher levels comes access to more branches to your upgrades.

Yes, that means that you can play the entire game with the Buster Sword, if you so choose, without feeling like you’re hitting a tree with a twig. The Buster Sword works well as an all-around weapon, but other beloved weapons from the original offer different strengths. This works the same way for every character you control, and each weapon has its own accumulated Ability Points (AP). This means that you will not have to share an individual pool of AP across all weapons, as they all have the same amount to use individually.

Gripping And Polished But Not Perfect

Like Final Fantasy XII, you have full control of each character on the fly via the D-Pad, allowing you to switch between each combatant immediately. This means you can either swap in the middle of combat or you can pause the game by opening the menu and issue separate commands for everyone. While this makes for some tense and gratifying moments, I do wish they had pulled another combat element from Final Fantasy XII and included something like the Gambit System, which allows for an ‘if-then’ kind of combat. This would allow for the AI to be more helpful and responsive to combat, since the current AI lacks both initiative and complexity.

Apart from that, combat feels very much like it does in Crisis Core: Final Fantasy VII but more streamlined. Instead of a preset bar like in Crisis Core, you have full access to all of your abilities and equipped Materia at one time. I spent a great deal of time simply mashing Square to win most battles, but bosses generally require you to use the Assess Materia to learn exactly how to defeat them more efficiently. Since you can gain a great deal narratively by using Assess (which I intentionally won’t divulge to you), the game does a great job here of rewarding you for investigating your enemies before defeating them.

Final Fantasy XIII returns in combat as well by means of the Stagger System. Certain attacks increase the target’s Stagger meter, and peaking that meter leaves the target’s defences temporarily rendered more susceptible to damage. Thankfully, Remake balances the need for Stagger with basic damage, so you don’t necessarily need to stagger every enemy in order to win. Bosses can be beaten that way, but expect to be there for a long, long time if you don’t find ways to stagger them.

I Finally Get It

I want to dedicate a bit of this review to the narrative without divulging any spoilers. This will be a bit challenging, so please bear with me.

From the very beginning of the game, you encounter something completely new to the game. It leaves this steady nagging in the back of your mind, like, “What is this? This wasn’t here before.” I bring this up because it has appeared in trailers before, so it’s not something for me to reveal. Equally so, I want to remain vague because the intrigue of the payoff depends on it.

Something changes significantly in reference to the original game, and that’s to be expected with the original team looking to create its original vision. At the same time, everything remains the same for the most part. What makes this worth mentioning is that even though I knew what happened in the original, I began to feel like upcoming events from the original may not play out as I know them. In this, I began to feel not like I was finally catching up but like I was on the front lines of something new and uniquely its own.

As I mentioned before, I know all the goings-on that take place in Final Fantasy VII, but I’ve never been able to organically experience them for myself. Having the game early, free of public feedback or response, I finally had the chance I’d been searching for. I got to live the world that so many have loved for so long, and the sheer overwhelming euphoria I felt in the new twists and turns makes me think that I might finally understand that youthful exuberance that makes up the rose-colored glasses for the original.

Final Fantasy VII Remake has a lot of expectations to live up to. At the same time, it expands on the original while taking chances on itself in ways that will make this series of games memorable. I feel some new things might be divisive for established fans, but I can say with certainty that new and old fans alike will walk away wanting to get their hands on the next game.

There is something special and nurtured here, and this game offers far more sophistication and improvement than a simple fan-service graphic boost. This is a new game worthy of its namesake and its own existence.

Putting the few slight issues aside, Final Fantasy VII Remake stuns with how it expands on the original. At the same time, it takes its own risks and creates its own footsteps. Final Fantasy VII Remake is beautiful, engrossing, and hard to pass up. This game is meant for both fans and newcomers, no matter how learned, and the sheer level of time and effort put into this reimagining truly shows through and through.